Come the end of August 2012 and London’s music-lovers can seem more than a little spoiled for choice, with the big beasts of the orchestra world filling the Royal Albert Hall’s stage in quick succession: Berliner Philharmoniker, Leipzig Gewandhaus, and Vienna Philharmonic.

But there’s another band in town, its reputation fast spreading around the globe. The Australian Chamber Orchestra – making two appearances in the UK as part of its 2012 European tour – is setting the pace among smaller ensembles, combining astonishing virtuosity with adventurous programming. Since 1989, violinist Richard Tognetti has been the group’s music director; he leads from his instrument, juggling control of the ensemble with frequent appearances as soloist.

“I realised that it was okay to be a hybrid musician and not a specialist.” Tognetti’s early career found him working with the leading lights of the early music movement, such as Christopher Hogwood and Frans Brüggen, and he has come to thrive in exploring the music of many centuries. The ACO’s UK programmes tell as much. The first, part of the Edinburgh International Festival, ranges from C. P. E. Bach to Giacinto Scelsi, Peteris Vasks and Grieg. For Tognetti, the links may not always be obvious, but they are there. “I think it’s easier to put programmes together where everything is connected. You could make a programme where everything is in C major! I think it’s more exciting and enticing that connections lurk underneath. The less obvious one would be Scelsi and C. P. E Bach, but I would argue that they share one very strong trait and that is avant-gardism and that C. P. E. Bach was one of the great ‘avant gardists’. He was certainly the first to write string symphonies.”

Scelsi interests Tognetti for his individualism. “When serialism was the lingua franca of serious music, Scelsi found a totally different path”. There’s a connection, too, with György Ligeti, a much more widely known figure of contemporary music. “There’s something about it that it appears chaotic. Whether there’s enormous process in Scelsi is hard to determine because we know he was interested in improvisation and obsessed with eastern spirituality. In the case of Ligeti, I’m not really sure if the process was any more rigorous than the process with Scelsi, but there’s something about the horizontal line that they’re able to create that you somehow feel as though you’re dealing with the same language. We know that people trying to find a different path to serialism were struggling and then they heard Ligeti’s Atmosphères, and Scelsi, and realised that there was a new way.” 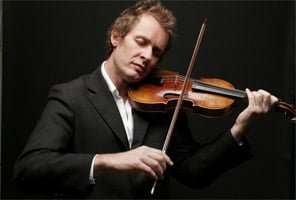 The roots of serialism are buried in the programme for the ACO’s London concert, given at Cadogan Hall. Schoenberg’s Second String Quartet (featuring soprano Dawn Upshaw) and his string orchestra version of Verklärte Nacht, sit beside songs by Schumann and Schubert, tracing a line through German and Viennese music. For Tognetti, there’s a “psychic trauma” embedded in these scores. Schumann’s song Mondnacht finds the composer “so at home with himself that you can’t believe that he would end up falling apart like that.” And between the two works by Schoenberg comes a breaking point; a disassociation from the past that set European music on a cerebral and difficult path. “1899 – you go bang! That’s the end! … And then the baton goes to America … and it’s all over for Europe. And then it just looses itself and people don’t care anymore about the music, and why should they when they’ve got American jazz and its great optimism?”

The London concert also features the music of Australian composer Richard Meale, whose own journey from discord to tonality in the late 1970s was the exact opposite of Schoenberg’s transformation. “He certainly wrote very discordant music and changed almost overnight. At the time – I was just a kid – it was like ‘there’s a traitor in the house!’ and he went on to write diatonic music.”

While contemporary music is a strong part of the ACO’s programmes, historically-informed performance remains a significant interest for Tognetti. The ensemble recently performed Beethoven’s Ninth (‘Choral’) Symphony in Australia, making use of research to attempt a recreation of the sound that Beethoven’s audience might have heard. But Tognetti is critical of those who assume authenticity is achieved by ticking a few boxes. “My heroes – the early champions of the early-music movement – thought a lot about authenticity. But then it was taken over in a shorthand sort of way so that it just denoted ‘well, we’re in touch with the composer’s intentions and we’re authentic and everyone else is ipso facto inauthentic and not the real thing’, without enough scrutiny. I think there was a lot of scrutiny at the beginning because it was a battle and so people had to defend themselves and then the tables turned and all of a sudden big symphony orchestras weren’t playing certain types of music and all you had to do was say you were playing original instruments and suddenly you were authentic.

“I wanted to question that and my most obvious example is Vivaldi’s Four Seasons. Secular music in Venice wasn’t played on gut strings; from what I understand, it was played on silk strings and playing it on gut strings isn’t necessarily authentic. The A in secular Venice – and I’m happy to stand corrected should anyone know any different – was tuned at 455 [Hz], not at 415. And this baloney about vibrato: well, Geminiani writes that you should vibrate all the time and it was Leopold Mozart who changed that one while plagiarising his text. So therefore those three major issues – the tuning, the type of strings used and the use of vibrato – playing at 415 on gut strings with no vibrato is further from being authentic than you get playing it at 440 with steel strings and vibrato, and that’s been my point. The early-music movement has gone into a treading water phase where as long as you say you’re playing it on original instruments, that’ll do. But I’m still the biggest advocate of original instruments. Don’t think we’re going backwards, like to what it was under Karajan. I just think we need to have an explosive engagement with this notion of authenticity.”

Neither does Tognetti take the instructions specified by great composers lightly. “Beethoven was a real mathematician – I know it’s a cliché to say music is maths – but what’s really interesting when you study his scores is that the metronome markings as set out by Karl the nephew and verified by Czerny later on are not speed indications but equations of proportion. So that means that if you decide – erroneously in my opinion – to take liberties with the metronome markings (and in the Ninth Symphony the fourth movement has about seventeen different metronome markings) you throw into question the whole sense of proportion. I don’t understand people who say ‘well, you know, it’s just how I feel it’. I say ‘well hold on, he wrote the piece in D minor. Do you feel it’s better in C sharp?!’”

And when there’s time, Tognetti likes to compose. “I look at myself as being a hobbyist and if people criticise me it doesn’t really worry me.” The ACO’s London concert includes a tribute to Paganini, entitled Caprice on Caprices (Diva). “It’s a piece for three solo violins and string orchestra, and it’s my third attempt at dealing with the music of Paganini. Diva is an ancient word from Sanskrit and it means divinity; and of course divo derives from it and Paganini was the first great Italian superstar. The music is me having a go!”