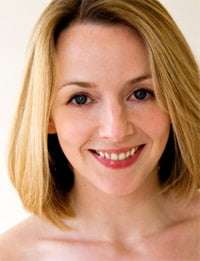 The first night back at English National Opera sees a revival of Jonathan Miller’s production of Donizetti’s The Elixir of Love. The colourful poster has been visible across London for a couple of months, though when I meet the subject of the photo, soprano Sarah Tynan in character as Adina, she hasn’t yet seen herself on the tube. But what are the challenges when taking an opera such as this on its second run?

“It’s very exciting to go back and do something like this again and the most interesting thing is working with a new cast – in this case working with Ben Johnson who will be playing Nemorino. I think my own interpretation of Adina will be slightly different this time, too, as she will be different due to the nature of the other people. I can’t wait to play her again, it will be really good fun. Who she is depends very much on the guys she likes and how she works with them. It will be fascinating to see how the chemistry with Nemorino and Belcore develops as we go through rehearsals.”

Sarah has clearly developed a great enthusiasm for Donizetti’s music, needing little prompting to gush about Elixir and what it has to offer. “Above all it is huge fun, the music is just exquisite, and it’s wonderful to sing. In this production I get to play a Marilyn Monroe type, a foxy character who all the guys like and the girls like too. Who wouldn’t want to do that? It’s huge fun.” The famous ‘Barcarolle’ is also “a lot of fun, and when we did it first Jonathan said to me and Andrew Shore ‘just sing it in a funny voice’, so we did and it worked. He likes to do stuff that is a bit different, mixing it up a bit.”

Sarah is delighted with the observation that there has been something of a Donizetti boom in London over the last year or so. “There is so much great music. I think if you take the time you find that he’s a composer for great characters in his operas, and that there is great music, great tunes and something that’s very suitable for the opera houses right now.” She also finds it suits her vocal qualities. “It is immensely gratifying to sing, I love it, and it’s so well written – bel canto is all about singing as beautifully as you can. To have the opportunity to sing this and to have fun at the same time is wonderful.” 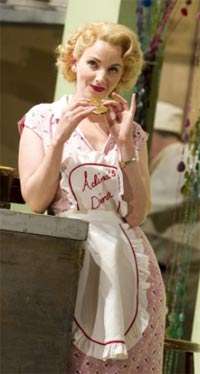 The conductor for Elixir is Rory Macdonald, latest in a list of extremely varied conductors with whom Sarah has worked in operatic roles, moving between the authenticity of Roger Norrington and Paul McCreesh to the more modern approaches of Edward Gardner and Kirill Karabits. Does she consciously vary her style between the two? “Yes. All conductors and directors have their own preferences where style is concerned, whether you like trills in a certain style, or ornaments in a certain style, but I really enjoy the challenge. As long as you’re not the kind of singer who feels they need to prescribe the way that they sing, I find it more interesting to collaborate with people. The main thing is that they are all fantastic conductors.”

With Norrington she has sung Susanna in Le nozze di Figaro, an experience which she found to be more than a little humbling. “Well… what didn’t I learn? He knows the piece, and he knows the characters, and every note of the opera, and knows them all so well that every rehearsal was a masterclass really. But he never made me feel that ‘this is how it must be done’. He really did the thing that I think is common about all good conductors, or the ones that I’ve worked with so far, where they want to make music as best they can. That often means them helping you to make the best music you can. With Roger, he’s got a wicked sense of humour as well, and I found it was a very pleasurable way to spend six weeks!”

Sarah admits to having a little difficulty sometimes casting away thoughts of those who have sung the same role previously. “You have to take things for what they are. If you re-make a movie then generally there has only been one person who has played that part before. If you re-do an opera then there are so many people – I mean, how many people have done Susanna? People all have their own personal favourites as well, which I suppose is slightly easier than having just one. It’s difficult to walk in and sing something like that, but you can only do what you do and what you relate to in that moment. I try and make sure that who I feel and what I feel is natural, because I’m an individual making an individual performance. You need to go back to the page, and ask yourself what the words are that you are trying to sing.”

Though back after the summer, Tynan has not exactly been relaxing on the beach. “Well I’ve just had a baby, so I haven’t had much time off at all. The baby’s eight weeks old, so I haven’t been working much! It’s good then to be coming back to something that I’ve done before, and something that is also such good fun too.” Good, too, to see colourful posters adorning London in the wake of the recent troubles. “Absolutely”, she nods, “it’s a very sunny picture, the continuation of summer rather than the start of autumn. The plot of Elixir is like that, something that gets you thinking about ambition; and given the social issues that we’re presented with at the moment it’s very poignant to be talking about a young guy who doesn’t have anything, who’s in love with someone, and she eventually falls in love with him, before she realises if he’s got any money or not. Then all the other girls suddenly start showing interest in him when they realise that he’s a great catch, because he’s loaded! It’s nice to know that she falls for him before she realises whether he’s got any money.”

Coming full circle, Sarah has arrived at the appeal of the opera itself. “This piece is very sunny, it’s hopeful, funny and sweet, the girl gets the guy – it’s a really great way to spend the evening!”