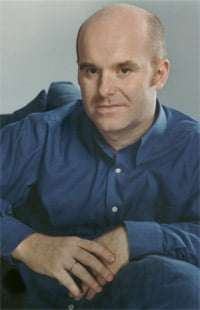 Laurence Cummings is currently enjoying a productive relationship with English National Opera, and is in town once again to conduct David Alden’s production of Handel’s Radamisto. At the moment of interview he is happy with progress. “It’s going really well. The set is fabulous, and it is wonderfully advantageous to have the back wall in place now for things to bounce off.”


The story of Radamisto is set in a city in Thrace, in Asia Minor, and Alden has pulled the stops out with a Far Eastern-themed set. “He has, both with the set and the costumes”, says Cummings, “and we’ve tried to incorporate some of that into the music, though obviously there are limits to the soundworld. There are some moments that are special-sounding, without going outside the parameters of what is historically acceptable.”


The English translation is a new one, and as yet unaccredited by ENO. Cummings acknowledges there are always difficulties when undertaking such a task. “It’s never a very easy process! However much preparation you do with the first draft inevitably things change, like the practical things where in Italian the literal translation is ‘bring chairs’, and the chairs are already out, so there are certain things you can get away with in the Italian but not the English. You have to think of another way of saying it! The other aspect is very important, which is keeping the rhyming couplets as close to the original as possible, and that is a tricky things in English as only so many things rhyme with words like ‘tomorrow! I am very happy with this translation though.” 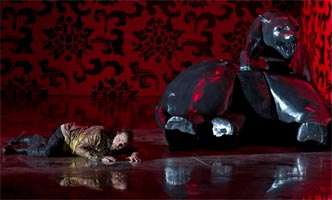 Laurence is yet to perform Radamisto in its original language. “No, even though David has done this production in Santa Fe in Italian. This one is a brand new translation. I’ve known the opera for a long time, but never had the chance to do it, so it’s very exciting for me. It is a rarity, and I think it’s wonderful that ENO takes the plunge on repertoire such as this. It’s a great time for early music and opera in London.”


Radamisto has strong London connections for Handel, too, as it received its first performance in the capital at the King’s Theatre in 1720. “It was also the first Royal Academy opera”, adds Laurence. “You get the feeling that there is a lot of nobility about it and it’s all about keeping the royals happy!” Although rather earlier than Messiah, Cummings’s last performance at ENO, he agrees how “it is of the same ethos, and you can hear the grandeur of it.”


Laurence speaks affectionately of the cast, many of whom he has already performed with. “I know Henry Waddington from Glyndebourne, and Larry (Lawrence Zizzo) I knew as a student at the Royal College of Music, we worked on Arminio when I was there. Christine (Rice) I haven’t worked with for a long time, so it’s good to renew acquaintance with her, and Sophie Bevan I’ve worked with a lot recently; and it’s lovely to see her blooming and developing. Ryan McKinny, he plays the tyrant king, is really commanding and outrageous, and then there is the wonderful Ailish Tynan who I’ve not worked with before, but have really enjoyed working with. She plays a part, Tigrane, which was originally written for a male castrato, and she has worked in some very sopraniste ornaments to that. He is really a politician who is monitoring what’s going on, so she’s put in a suit and things, with a big tummy. It’s not comic as such, but fascinatingly weird! We’re very blessed with the cast that we have for this opera.”

Cummings is also satisfied to see a healthy quotient of home-grown singers. “It’s good to have a selection of British and Irish singers in this production. I was reflecting on this, and the idea of superstars flying in is a relatively modern one. Dame Janet Baker did an event at the Academy recently, and I looked at the cast and noticed it was all English singers. It’s nice to see them get their opportunity here.” 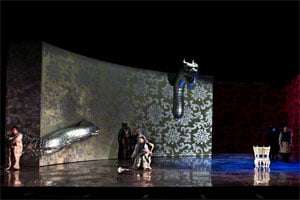 Handel is close to the conductor’s heart, and it was a love awakened by the operas themselves. “It was my first job out of college, and I was asked to répétiteur and play the harpsichord for an opera company in Ireland who were touring Tamerlano. So I put my harpsichord in the back of my Volvo estate, trawled over on the ferry, and we did a big tour of Ireland over six weeks, which was lovely, playing small venues. That’s when I really got in to it, and I’ve been very lucky to have the opportunity to do so many of the operas. I still feel like I’m halfway through!”

BBC Radio 3 broadcast Handel’s entire operatic output in ‘his’ year of 2009, but Cummings feels this and other events in the year served their purpose handsomely. “I think there is a real appetite for opera, and I think that year was good. I was worried, because often in an anniversary year you get to the end of that year and you’ve heard more than you want, but I think the opposite has been true in Handel’s case, and people have discovered how much music they didn’t know, and they got excited about that.”

Our conversation switches to the venue itself, and the suitability of the Coliseum for Baroque opera. “Obviously it’s a much bigger space than the original would have had, but with the right set it can be a very intimate theatre – surprisingly so, if you’re looking down from the balcony. The sound travels up the building.” He is also quick to sing the praises of the orchestra. “They are very well versed in changing styles, because when we had our first rehearsal they had just done the first night of a Janáček opera and the leader, Janice Graham, turned round to them and said, ‘Right, remember, no vibrato and slow bows!’ I am so impressed with them, that they can do that.”

Naturally the orchestra is a scaled-down vehicle. “Yes, because after all Baroque opera is chamber music, and the orchestra form a triangle with the two corners of the stage”. Is it technically quite difficult to conduct? “No, a lot of the time in Baroque opera there are very few time changes within arias, so you’re there to give the pulse. The only difficulty really occurs when the singer is at the back of the stage, and then I stand up – and of course there is the other harpsichordist as well. It’s great in the recitatives to have two harpsichords, because in big spaces the secret is not to play things louder. If you make the gestures more extreme they can make a crescendo for instance that is painted large in the theatre. There are long and florid recitatives, so we piece them together.”


He also reveals a cunning tactic to go with changes of scenery. “It’s a trade secret perhaps, but if they want to do a stage move then we can play some of the orchestral sections twice, and perhaps add more trumpets the second time or more ornamentation. Although you’re not being totally true with the score I am sure it is something Handel would have appreciated it. He was a very practical man!”


Cummings’s last ENO appearance saw an alternative view of Messiah, the famous oratorio given choreography for the first time. It was an enlightening experience, even for so seasoned a Handelian. “We had a mixture of reviews, but I’ve never done a show where there was a standing ovation after every night. In the theatre it was incredibly well received, and I think a lot of people who didn’t like it actually didn’t like the idea of it, so it was very hard to imagine how we would have wooed them, but I found it very moving, I found the process of revisiting a very familiar work fascinating. We would be doing an aria and checking the text, and there were so many times where we looked at the text to see exactly what the words meant. It’s the difference between having six weeks to rehearse and a day, where everyone knows it on a slightly monochrome level perhaps. It was wonderful to have that opportunity, and to have the chorus singing from memory, literally singing from their hearts, was so powerful.”

For anybody new to Handel opera, Cummings is more than happy to recommend Radamisto. “It’s a good opera to start with, it’s very clear, there is a beautiful set, and I don’t think you need to know anything before you start. Hopefully we will be making everything as clear as possible, and the music itself is sensational!”.