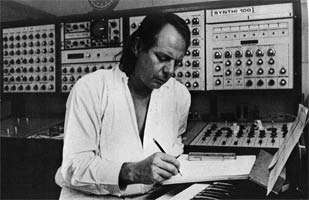 The sudden death of Karlheinz Stockhausen has removed one of the last remaining figures from the post-war avant-garde, whose radical transformation of European new music at the start of the 1950s polarized its reception to an extent that continues to resonate in a cultural scene vastly different from the one where the composer had first made his mark. This was in a Germany struggling to secure a new identity in the aftermath of war,
then geographical partition. 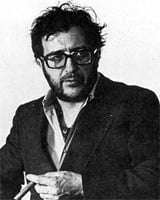 Stockhausen was born on August 22nd, 1928 in Burg Mödrath, near Cologne and his beginnings were far from auspicious. The death of his father on the Eastern front, and his mother’s mental collapse and murder through the Nazi’s euthanasia policy, forced him into various menial jobs to further his education. He worked as a jazz pianist from 1947, entering Cologne’s Hochschule für Müsik to specialize in school music and piano; he also studied musicology and philosophy at Cologne University. His first extant works find him coming to terms with Bartók and Stravinsky, their neutral atmosphere far removed from the intensity of music being composed by Boulez, Nono and Berio.

It was summer 1951 that marked his musical ‘coming of age’, when a visit to the new music course at Darmstadt brought him into contact with the above composers and also works by the preceding generation ­ notably Messiaen’s Quatre études de rythme, whose extension of serial principles from pitch to the domains of duration, dynamics and timbre led him to conceive of an all-embracing means of musical organization. This has its first realization in Kreuzspiel, whose precise though never clinical rhythms and delicately pointillist textures became a blueprint that seems tentative only in hindsight.

Heading to Paris early in 1952 to study with Messiaen, Stockhausen evolved rapidly as a composer. Kontra-Punkte pointedly redirected serialist means towards more elaborate ends – a transformation from the ‘point’ to the ‘group’ that was to pervade his music over the next decade. In addition to the first four of what became a series of 11 Klavierstücke, he also applied himself intensively to electronic music – producing the two Studien that marked a break with musique concrète techniques in favour of pieces generated from sine-waves and the manipulation of ‘white noise’. These paved the way for three mid-1950s masterpieces where interpretative freedom (though never
randomness) is built into the actual music: Zeitmasze for wind quintet; Gesang der Jünglinge, its integrating of voices and electronics allied to a spatial element that itself expands the serial armoury; and Gruppen for three orchestras – whose multi-layered complexity yields music sensuous and visceral in its impact.

In 1957 Stockhausen began to teach at the Darmstadt summer courses, the start of an involvement with music education that saw him found the Cologne Institute for New Music and enjoy a successful career as lecturer throughout Western Europe and in the USA. In the solo percussion Zyklus and ensemble piece Refrain, he further explored spatial and aleatoric (chance-related) possibilities – which Carré for four orchestra and choirs translates onto an expansive, even opulent canvas where the musical groups’ are expanded into ‘moments’; a development through which Stockhausen aimed to restore an underlying stability to the listener’s experience of the music. This was refined in Kontakte – where the interplay between electronic and instrumental timbre becomes a defining principle – then brought to a head in Momente. This work for soprano, choirs and ensemble soon expanded to oratorio-like proportions and also utilized elements of theatre that were seldom absent thereafter. 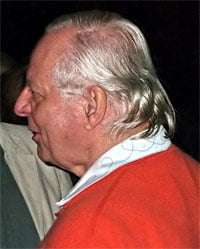 It was interaction of performers with technology to which he next turned his attention, writing the two Mikrophonie – in which tam-tam, and chorus with Hammond organ, are treated to an array of sound modulation – and Mixtur, though here real-time transformation of the five orchestral groups presented problems of co-ordination. Solo and Spiral opt for the more portable interaction of performer and instrument, while Telemusik integrates electronic sounds with traditional sources in an early instance of ‘world music’. The climax of this phase is Hymnen, a two-hour work for electronics in which national anthems from around the world are brought together in music whose scope and grandeur remain unequalled in his
output.

During this period, Stockhausen worked ever more intensively with his own ensemble, and the latter 1960s saw a number of projects in which the ‘group factor’ became the means by which he devolved composition into a largely collaborative process. This approach is evident in Prozession – whose material is derived entirely from earlier works – and Kurzwellen, whose content is extemporized by musicians drawing on material transmitted
by short-wave receivers. The outcome was two collections of ‘text-pieces – Aus dem sieben Tagen and Für kommende Zeiten, in which the scores are largely reduced to verbal guidelines to the performers who work out the form and content from first principles. Such theories also gave rise to Stimmung, where six amplified vocalists traverse a serially derived sequence of
natural harmonics and whose techniques of vocal articulation exerted a profound influence on younger composers.

Having over two decades followed a trajectory from complete precision to virtual intuition, Stockhausen began
the 1970s with a return to fully-notated and melodically derived music: Mantra for two pianos and percussion emphasizing purely musical processes
with only minimal electronic modification. Other works from the first part of the decade – notably the orchestral pieces Trans and Jubiläum, the Amerindian song-cycle Am Himmel wandre ich and the zodiac cycle Tierkreis – find the composer working on a moderate, even miniature scale. Conversely, works such as ‘park music for five groups’ Sternklang, the Japanese-inspired Inori, the choral opera Atmen gibt das Leben and the cosmically inspired Sirius all pursue an extra-musical thinking which, if largely free of
charges of megalomania in their often meditative soundscapes, place greater emphasis on the underlying concept rather than the actual music. 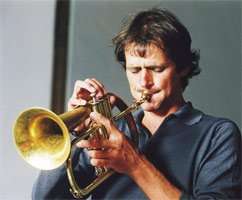 This factor may determine the fate of Stockhausen’s magnum opus – the seven-day opera cycle Licht. Begun in 1977, the project occupied the composer for the next quarter-century. Each opera is structured in numerous scenes that he was
able to adapt, whole or in part – as stand-alone works, thus ensuring his catalogue expanded apace. All of them have prominent roles for a regular
nucleus of performers: three of his six children – the trumpeter Markus,
saxophonist Simon and pianist Majella, as well as clarinettist Susanne
Stephens and flautist Kathinka Pasveer. Choirs, ensembles, orchestras and
live electronics are also involved, while the expression embraces extremes
of simplicity and complexity – though the deriving of musical content from a
pool of melodic formulae ensures a consistency across and between the operas
as a whole. Five of the piece’s seven parts have been staged at La Scala,
Covent Garden and the Leipzig Opera between 1981 and 1996, though it remains
to be seen whether the two integral cycles planned for 2008 will go ahead in
the absence of the composer’s direct supervision.


Indeed, Stockhausen’s
standing underwent a marked decline from the mid-1970s as the influence of
the European avant-garde itself waned and composers were increasingly drawn
to the attractions of Minimalism and neo-Romanticism. It is the earlier
works that have continued to exert an appeal on a younger generation of
listeners: witness the Stockhausen weekends at the Barbican in 1985 and 2001 – the latter attended by many practitioners of dance and electronica, who
held the composer in high esteem for his breaking-down sonic barriers in a
way that classically orientated listeners still struggle to comprehend. The
completion of Licht in 2002 may have been a ‘release’ in all senses,
Stockhausen then embarking on Klang: 24 pieces for the hours of the day, 21
of them realized at his death – in which a renewed enjoyment of and emphasis on sound for its own sake makes for results tantalizing and affecting in
equal measure.

Unlike many of his contemporaries, Stockhausen was not drawn
to any form of Marxism and remained a practising Catholic until the
mid-1960s, while general spiritual issues had a lifelong impact on his
thinking. The desire to control the dissemination of his music led him to
break with Universal in the 1970s and become his own publisher. Likewise,
disagreement with DG – which had issued most of the works between 1950 and
1980 – over its CD release schedule led to the Stockhausen Edition: this
currently numbers 91 volumes all devised, annotated and illustrated by the
composer, whose seeming reluctance to make the series widely available other
than directly from Stockhausen-Verlag has reduced the public impact such a
project might have been expected to have. A representative selection of his
works are available on labels including Accord, Auvidis, BMC, Disques
Montaigne, EMI Classics, Hat-Hut Hat Now Series, Harmonia Mundi, Hyperion,
Koch, Mode Records, Musidisc, New Albion, Sony Classical and Wergo.

An
eightieth birthday year which promised a full reappraisal of his output will
now sadly serve a commemorative function. Yet the nature of his work is such
that, while its ambition can often outstrip its achievement, the originality
of his thinking and conviction with which those ideas were carried through
ought to ensure lasting significance for a number of pieces. Stockhausen’s
own place among the most important creative artists from the latter half of
the century is meanwhile secure.