With his new album, La Passione, Alfie Boe lets us into the secret of one of his first musical loves – Italian Song. My immediate impressions of the affable tenor are good, with not an ounce of self-importance or the need to promote, just down-to-earth good sense about classical and operatic repertoire, touched with a healthy sense of humour.

We begin by talking about Alfie’s first acquaintances with the repertoire. “It was when I was in the D’Oyly Carte Opera Company when I started singing a few Italian songs – Mattinata, Torna a Surriento and O Sole Mio – but it was really when I went to music-college that I discovered a lot more. I found Tosti songs and lots of Neapolitan songs out there that I loved to sing. It really developed the voice incredibly, so it was really the first year at college that I discovered the repertoire more.” 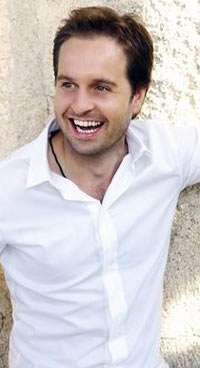 Alfie goes on to talk about his schooling at D’Oyly Carte. “We were doing two productions – one a Gilbert & Sullivan production, HMS Pinafore, and the other was Johann Strauss’s Die Fledermaus, so we were doing two productions on the road. That was really my first ‘study’ of music, as I’d never read music before and never really sung a full piece like that before. But the Gilbert & Sullivan is an amazing section of repertoire that again is incredible training for the voice. It’s not easy stuff to sing; you have to really rehearse it well. It’s written in a very Italianate way, as well as being fun to sing. The lines that Gilbert wrote are incredible. We then started doing more productions, and I continued to learn a lot of different roles with the D’Oyly Carte.”

The tenor agrees the Italian repertoire makes considerable demands on the voice. “When I was at college, the first of my professors said ‘learn the Italian repertoire, the folksongs, discover Tosti, and learn the songs inside and out – the structure of them, the language and the translation’. They’re incredible poems that are so passionate and so emotional. It can be pretty tricky some of it, you have to really work hard at making the songs sound right, making them speak the story that they’re supposed to tell.”

Is he daunted by the history those songs have had in performance and as recordings? The response is unequivocal. “No, I think to be honest you have to put your own stamp on them. With anything that’s classical you have to put your own stamp on it. If you started doing the same things that other tenors have done then it’s going to be a boring world! You need to develop your own performance, and the first thing that does that is your voice, the way you sound. And if your voice has a unique quality about it and sounds different to anybody else’s, you’re on your way.”

Alfie’s La Passione recording stands out for its subtle use of the Royal Philharmonic Orchestra, a sensitive handling that steers clear of schmaltz. It’s clear this was important to the singer. “Yes, that’s something that I wanted to insist on. With a lot of these songs in the past they’ve been recorded with a lot of bells and whistles added to them – tambourines and triangles and lots of percussion, and castanets playing here and there! I wanted to strip all that away and have solid strings and simple arrangements, take it back to the nitty-gritty of the songs and make the melodies speak, rather than trying to flavour it.”

Drawing a vivid parallel, Alfie says: “If you look at it the same way as food, you can go to a restaurant and have fish, chips and peas presented in a way that’s very pleasing, piled up in a really nice, neat display, with the sauce all dribbled round the side of the plate and with the fish perfectly cut … and then you go to your ‘chippie’, and you see it all wrapped in newspaper, and you think it tastes far better than the stuff in the restaurant! And it is basically like that, I wanted to take away all the glossiness of previous interpretations from over the years, and make the songs speak, make the tunes and the melodies just comes across.”

The capacity for a new audience, a set of listeners who don’t listen to a great deal of classical music, is something Boe is well aware of. “That’s been my intention since day one really, to stay singing classically structured material and cross it over to a good audience. Because I’m a relatively young singer, people look at you and they think ‘Oh right, here’s another tenor on the scene, what is he going to do now? He’s going to do the inevitable Nessun dorma’. And, yes, I’ve done all that, I’ve done all my songs that are going to attract people’s attention. But if you take the word ‘crossover’, for example, lots of singers that are considered ‘crossover artists’ would take an operatic song, and something classical, and then sing a pop song. That’s not my intention. I’m not a ‘crossover artist’: I’m a classical opera singer who wants to reach crossover audiences, if you see what I mean. If that’s what happens with this album, then we’re on our way.”

He introduces the ‘crossover’ term without the baggage often attached to it by more ‘classical’ audiences. “It does have that, it really does, and I think the word I’d actually like to use is ‘commercial’, not ‘crossover’. ‘Commercial’ is something that describes the repertoire and our intentions, and that’s the title I would give to this sort of music, it has a commercial quality that people can adhere to.”

Alfie Boe is in his early thirties, and has noticed his voice changing in the last five years. “It’s something I have to keep on top of. I have my lessons and my voice is always changing, but it’s beginning to settle where it feels comfiest. Once it breaks, the voice takes a long time to settle. It’s a priority to look after it – after all, it’s your living, once it’s gone you can’t buy another one!”

Yet he relishes the opportunities. “The older you get the repertoire doors just fling wide open. I’ve done Cavaradossi (Tosca) and Alfredo (La traviata). There is lots of Puccini and Verdi repertoire to sing but I want to make sure I can and should be singing that music at the right time. The advice you have from music-teachers helps you know the right time to make that move. At the moment the roles I can do are a lot of the Donizetti repertoire. You have to be careful you don’t put yourself out there too early into these roles.”

On the horizon for Boe are “a lot of concerts, some TV appearances, and then in the New Year I’m back at English National Opera in The Merry Widow. Then later next year I’m at the Royal Opera House doing a production of Elektra. I’m playing a short role, where I run on, scream myself silly and then run off!”

Finally I ask him if he would consider breaking into pop repertoire, as it seems that temptation may not be too far away. His guarded response suggests the conditions would have to be right. “It is something I’d consider, but it would have to be a song that is credible to the voice, maybe something written specifically for me. The genius for that of course was Luciano Pavarotti, he opened the door to another world. He had the credibility as an opera singer first, so that helped him to make the move and do whatever he wanted to do. He could have sung My Old Man’s a Dustman and got away with it! I think it’s important you build your credibility on the opera stage before you consider doing anything that commercial.”