Leading Tones, like its predecessor Conducting Business, as the flyleaf note confirms is an episodic and often discursive trawl through the experiences and thoughts of a conductor regarding his professional career. Leonard Slatkin covers his memories of working with the various orchestras with which he has had formal positions, the people with whom he has had most pleasure working, cautionary tales about critics and life in administrative backwaters. 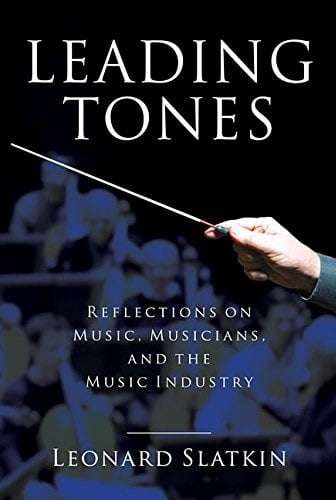 The first few chapters take us to places where he has been music director. The first mentioned, his most recent, Lyon, and where he has recently given up the role, is spoken of with some affection. Possibly his first post in a country where his first language is not spoken he regales us with tales of mastering French as well as the pleasure of being in what is regarded as the gastronomic centre of France. He was clearly shocked when he was told he was becoming too expensive and it was made clear, in effect, that the orchestra was looking for someone cheaper. There follow some thoughts on other orchestras he has led, not least St Louis, the BBC Symphony Orchestra and, currently, Detroit.

His top-ten favourite works are interesting. As he says you can make a list and then realise just how many pieces and composers you have omitted. Elgar but no Vaughan Williams, Barber but no Gershwin or Copland and no Mahler or Stravinsky at all. Still, it’s an impossible task. His reasons for including pieces is fascinating and informative.

There are six colleagues whose friendship he has enjoyed and treasured, not least Gilbert Kaplan, the magazine proprietor who, without any musical training, took up a single work – Mahler’s ‘Resurrection’ Symphony and learnt how to conduct so that he could perform it and devoted the rest of his life to this mission. Slatkin’s help to enable Kaplan to realise his ambition is a really interesting read.

For aspiring musicians there is a very detailed chapter on the pitfalls of auditioning for an orchestral position. An imaginary aspirant is taken through the processes, common in US orchestras, for recruiting new members and advice can be gleaned by those about to embark on this nerve-wracking experience on how to succeed.

Slatkin’s experiences in the world of music-criticism take up a long chapter with several reviews reproduced in full. He tries to be sanguine about the whole process, but clearly some writers have touched a raw nerve now and again. His views on audience behaviour and applause are relaxed and balanced. Other writings are reproduced which have appeared elsewhere and which shed light on his generally easygoing approach to this most strenuous of professions.

It seems clear that this book is aimed predominantly at the American market but that should not prevent anyone from elsewhere gaining a great deal of pleasure from reading it. Recommended then.