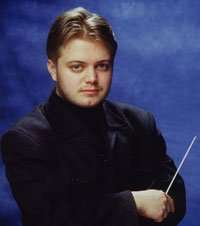 At the age of four, Mikko Franck, the youngest of five children, asked his parents for a violin but, believing that by the next day he would want to be a policeman or a truck driver, they refused. It was only when the boy persisted in his request that they eventually gave in. “I was five then and I thought that when I became an adult I would be a violinist and a conductor. In fact I did not become a violinist, only a conductor: so I got half of it right, which for a five-year-old is not bad!”

The man who tells me this is now at Covent Garden where he makes his debut with Tosca and is set to return next season to conduct L’Elisir d’Amore. That he is already booked for more than one opera confirms the high regard that already exists for this artist who is still in his twenties. He has been compared to such other early-rising talents as Simon Rattle and Esa-Pekka Salonen and, like the latter, Franck comes from Finland where he has been the General Music Director of the Finnish National opera. He is now working out his time there until next February having recently announced his resignation. However these troubled times (Mikko’s resignation has been followed by that of the General Director) could well be regarded as a warning for the opera house rather than for Mikko who in any case is currently part of both its management group and of a proposed artistic committee. “One should not conclude from this that I have changed my mind: the resignation is officially still there and we will see what happens in the future. I try to take one day at a time: I believe in the moment and the future will come when it comes.”

This last comment is very pertinent to Mikko’s career as a whole and to his attitude to music, although he was remarkable in being so young when he became aware with such certainty that music would be central to his life. “Where did that come from? I can’t really answer, but it came from inside me, an inner knowledge that this was what I was meant to do although mine was not a musical family.” This realisation took over his life. “I started reading orchestral scores when I was eight years old. That was when I started listening to symphonies and operas on the CD player and I would conduct them every evening. Puccini, Verdi, Tchaikovsky and Sibelius were my favourite composers and my main focus is still on the romantic repertoire although I want to do all kinds of music and try to include contemporary pieces. The violin was a very important preparation for conducting because if you’ve played an orchestral instrument, as I did in the Finnish National Youth Symphony Orchestra, it means that you really appreciate how it feels to be part of an orchestra. It’s through having that knowledge that a conductor can help. Yet another important preparation was starting to sing aged eight as a boy soprano with the Finnish National Opera. I was in the children’s choir but was also heard as the shepherd boy in Tosca. That was in 1986 and in ’96 I began conducting there. That means that I’ve been with the company for more than twenty years and that I’m one of the longest serving members, so I think that I could soon retire!”

With all this musical activity as a child, it’s no wonder that Mikko avoided school as much as possible and if his special preoccupations put him in a world of his own he did not mind (“I liked to be by myself and still do”). That period also involved other theatre work, radio, commercials and television shows, all of which his parents accepted (“They let me do what I wanted to do, and they supported me when I needed it”). In the mid-nineties his violin playing would take him into restaurants to play jazz and pop music but one day before Mikko’s sixteenth birthday Professor Jorma Panula witnessed his conducting at the Sibelius Academy in Helsinki and invited him to become his private student. This was the decisive moment. “I no longer had time to practise the violin and I did not want to play unless I did it well. The world does not need another bad violinist!”

Mikko has his own approach to conducting. “At the Finnish School of Conducting their motto was this: ‘if you can’t help the orchestra, at least try not to disturb them’. And that’s very good because I’ve never appreciated conductors who think it’s all about them. It’s not: it’s all about the composer and about those who make the music. The conductor is there to help the orchestra and the singers to give their best. That’s all – but it’s a lot already! I may come to a first rehearsal with a clear vision in my mind of the structure of a piece and of what I want, but for me it’s just as important to listen. When I conduct a work in different places it’s never the same because the interpretation is shaped together with the people and depends on what is the natural way for them to do it. If it doesn’t feel right for them, you shouldn’t force it because the aim is not to have every note exactly as I imagined it, but to make good music – and for that the musicians need to feel free, even if that’s not quite the case in that they do have to follow me. So actually they are doing what I want, but I just don’t tell them that!”

Pursuant to this view of things, Mikko will always go to a first rehearsal with ears – and eyes – wide open. “First and very quickly you have to get to know the people because often you’ve never met them before but you’re there to make music together which is a very intimate thing. It has less to do with verbal communication than with feeling and sensing.” To achieve this may sound difficult but Mikko is surely aided by the feelings he has about opera and about opera houses. “I could not live without doing opera and I’m convinced that an opera conductor must have a sense of theatre. Furthermore, I love that atmosphere when you walk around and find yourself passing a soprano, a carpenter, an orchestral musician, a make-up artist. It’s a privilege to work in a place that brings together so many professions and all of them here for just one purpose: to make good performances.” He mentions too the importance of the connection between stage and pit; a sharing of the moment that has to be based on feeling since neither fully sees the other. “There are moments when I have to follow the singers and moments when they have to follow me and that’s all part of this interaction that I find fantastic. If I can sense that the stage and the orchestra have become one then I can believe that I have somehow succeeded in my work.”

As regards Covent Garden, Mikko is delighted to be appearing twice this year seeing this continuation as an opportunity to build up a connection. “I’m lucky too in that these are two works that I love. Tosca is my favourite opera and I’ve now done L’Elisir d’Amore quite a lot. Donizetti is very delicate and in his comic operas you need perfect timing if they are to work. A single note that is off stands out immediately. Consequently you could say that such works are more demanding for an orchestra than a dramatic one – but I’m not saying that Tosca is easy either! Tosca is very typical of Puccini in having no overture but putting you in the middle of the action immediately. He was a master orchestrator in the way that he wrote for individual instrument and in all the harmonies and all that colour. I like especially in Puccini how you have so many things mixing very organically. You can’t really say ‘there’s a prelude’, ‘there’s an aria’: everything really flows in one line.”

If it can be said that the orchestra drives the drama in Act One of Tosca and has to sustain the stage action at the end of Act Two, the strongest demands made on it are to be found in the last act. There’s the long introduction interrupted only by the Shepherd Boy’s song and then the need to support and sustain the dark drama, which now centres directly on Tosca and Cavaradossi. “These are the critical moments for the orchestra. It’s really a question of finding the right tempo because if it’s too slow the whole thing just stops and people get bored, but if it’s too fast it doesn’t make proper sense. It has to be exactly right, and what is exactly right changes every day. There’s a slightly different tempo every time that I do that third act based on what has happened during the first two and on what I sense by intuition to be the atmosphere in that particular performance. I can’t change a lot because the singers have their stage movements, but I do take some liberty here and it’s in the character and in the colours as well as in the tempo. When I start a performance at 7.30 I have no idea how the third act will be that evening, and I don’t even want to know. I just want to feel it and then see what happens. It’s a case of living in the moment and for me that’s necessary. We have to offer living art because otherwise it becomes like a museum object and that would mean we were in the wrong place.” Listening to Mikko talk like this, one feels that he is definitely in the right place and will continue to be so for many years to come.