The Moon, the Moon!

With Colin Matthews and Pierre Boulez

This turned out to be an absorbing, enlightening and rewarding evening, a three-hour session (including an interval) of rehearsing, performing and recording. As regulars at its Barbican Hall concerts will know, the London Symphony Orchestra has been including unannounced pieces in concerts over the last few years, 18 short works commissioned from UK-based composers by UBS for the Sound Adventures scheme, now re-named UBS Soundscapes: Pioneers. 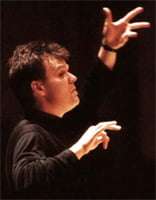 This event was by way of revisiting three of the commissions – those by Helen Grime, Luke Bedford and Martin Suckling – and previewing the other two. Allowing approximately half-an-hour for each work, the rehearsals proceeded with maximum efficiency, François-Xavier Roth (who won the Donatella Flick Conducting Competition in 2000 and became the LSO’s assistant conductor for the next two years) bringing a mix of directness, wit and authority to the process, the LSO responding with alacrity, care and involvement. First there was a run-through (each piece being about 5 or 6 minutes), then came a detailed rehearsal including dialogue with the respective composers, Colin Matthews adding his experienced comments, Roth very clear about was needed, and finally the piece was recorded (Tony Faulkner engineering), for a promotional CD, the audience (quite a lot of us) being diligently silent throughout. Roth asked for “the big silence in the audience” before the first recording. He got it.

Philip Flood, Head of LSO Discovery, introduced the evening as a “celebration”. First off was Helen Grime’s Virga (“… precipitation that falls from a cloud but evaporates before it reaches the ground. It can produce rather dramatic and beautiful scenes, especially during a sunset.”). Leaving aside the picturesque possibilities, the music is agitated and sonorous, lyrical, angular, striving, spiky and dissonant. There were echoes of Elliott Carter’s music. Impressive.

Luke Bedford’s Outblaze the Sky (the title re-worked from a phrase in D. M. Thomas’s novel “The White Hotel”) is more atmospheric, translucent, sometimes-enchanted, and requiring “free bows” (Roth). Quite effective, the piece seems more concerned with effects than musical substance; glissandos had in mind Britten’s use of them in “A Midsummer Night’s Dream” and some of the colours reminded of some aspects of Schoenberg’s Five Orchestral Pieces. 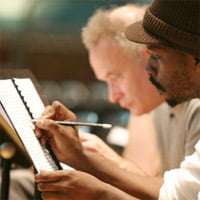 Jason Yarde’s Rude Awakening! has yet to be heard in the Barbican and is awaiting a slot in next season’s schedule. In musical style Yarde covers a lot of ground in his narration of being half-asleep before waking and then going into deeper sleep before becoming conscious with a bang rather later than intended. The opening, an insouciant melody, is engaging, but it comes round too often; the heavily syncopated passages – revealing Yarde’s jazz side – recall Conlon Nancarrow, and a tendency to minimalism palled even over such a short playing time. Such reiteration undid some nice ideas.

The Moon, the moon! (Edward Lear) by Martin Suckling, like Grime’s Virga, is satisfying complex: sinewy, effervescent, texturally busy (not least in the strings), and evanescent in its changes from jubilant brass to engaging rhythmic patterns with craggy gestures, note-bending from flutes (somewhat Japanese) and an unceremoniously arrived at and cut from. Seemingly disjointed – it worked!

Joe Duddell’s Azalea Fragments has also to be performed at the Barbican Hall – but will be on 1 June as a prelude to Sir Colin Davis conducting Schubert and Bruckner. (I have permission to trail this!) Duddell takes his title from Patrick Heron’s painting. As music, there is (again) something Brittenesque (maybe from Lennox Berkeley, too, certainly reminding of him) in music that offsets rapid notes against long-held ones and is sometimes touchingly beautiful, Duddell not afraid to write a yearning phrase or something delicate or have harp and celesta chiming beguiling. An intriguing piece, worth catching.

Hopefully another such workshop can be arranged. I should like to hear again Daniel Basford’s Shift, Tim Garland’s Overture to the Life of a Real Boy and Rachel Leach’s Tantivy.

To round-off this particular evening, Pierre Boulez was asked for his comments on the works played. “I am supposed to give my opinion now!” He opted to give an overall impression rather than be specific. Having heaped praise on the LSO and François-Xavier Roth for achieving so much during the session, Boulez acknowledged that he was closer to some of the pieces more than others and he identified two main dangers in the art of musical composition: either being too simple or too complex. He also cited repetition as something to be avoided. He also suggested that what had been played here showed little advancement on what was being written 100 years ago. His final comment was to urge the composers to “go further”.