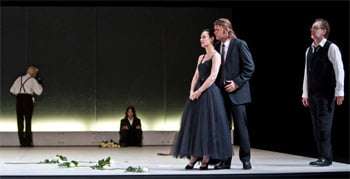 A Lulu postscript, really. I was enthusiastic about Christof Loy’s new production of Berg’s opera when I reviewed the first night at The Royal Opera House (on 4 June) for The Opera Critic; that site’s owner rejected this follow-up! (I therefore post it autonomously on Classical Source, and Richard Whitehouse’s first-night review, for this site, is linked to below.) My initial enthusiasm remains intact (increased in fact) even though it was countered by there being more dissenters than there were enthusiasts – for the staging itself. That said, we all agreed on the magnificence of the singing, orchestral playing and conducting. The problem, for those who were critical, seems to have been the minimalist production – not enough to look at, that this is not a conventional opera production. But, why do things have to be stereotypical? 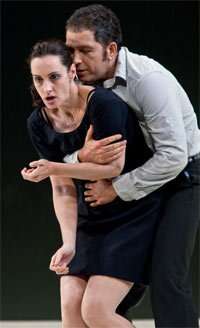 Yet, even the black-and-white, rather formal presentation was felt to be self-defeating and would leave anyone new to Lulu floundering as to its narrative. Not so! I took a friend who didn’t know a note of the opera (but was very curious about it). The production worked for her. But then she was thoughtfully interactive. She read the opera’s synopsis an act at a time before each one began; she balanced well the (very helpful) surtitles (Berg’s libretto, after two Wedekind novels, is helpfully retrospective when it needs to be) with the machinations of the protagonists and – this bit I am guessing at – let the orchestra provide the rest (and, anyway, everything you need to know about what’s going on and who’s who is in the music itself). Certainly my friend loved the opera (not as forbidding as anticipated – she’s more a Puccini girl – and, in fact, Puccini isn’t that far away in some of Berg’s most-sensual music) and thought the production worked a treat. That’s vindication enough.

From my point of view, seeing it again from a different perspective, five rows back in the Stalls, was to find things in Loy’s direction that left in no doubt what was going on. For example, in Act One, from actions alone, there can little dispute that Lulu, just one of her names, had had an incestuous relationship with her father, Schigolch. Being closer to the stage also confirmed what an outstanding cast has been assembled for this production of Lulu, each singer the master of Berg’s often-cruel demands and the precision with which they combined musically and as the characters. 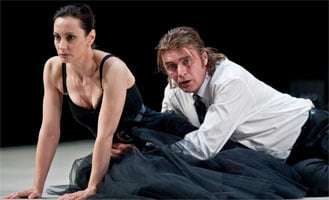 And if it is “only acting” it was convincing – Michael Volle absolutely commanding as Dr Schön (and then Jack the Ripper), Agneta Eichenholz ensnaring, and also vulnerable, as Lulu herself (“a witch” my friend thought; the male in me had a different view; another victim!), Gywnne Howell superb as the shabby, asthmatic, not-very-fatherly if at times affectionate Schigolch and Philip Langridge seedily conniving as the Marquis (one of this consummate singer’s three roles), with Jennifer Larmore portraying the goodly Countess Geschwitz as someone who shouldn’t be a part of this circle – and knows it – but will help anyway (and if the opera includes incest, then Lulu and Geschwitz have the lesbianism angle – makes your average soap-opera look pretty tame, and these aspects seem to have eluded the censors back in the 1930s when Berg’s opera, unfinished then of course, first made it to the stage).

Antonio Pappano’s conducting once again brought out the beauty, sensuousness, edge and lucid complexity of the music, its advanced formulation no barrier to the listener being extremely moved by it and caught up with all that it exposes. On this final evening of Lulu, the ROH Orchestra was quite brilliant and accurate (little things not quite exacting enough on the first night now being razor-sharp in execution). And Countess Geschwitz’s scream come Jack the Ripper’s stabbing of Lulu was loud and clear – it was inaudible (to me) on the first night – Pappano finding more horror in the orchestra’s outburst than I believed was there previously.

All in all, a great night! The audience’s response was far more enthusiastic than on 4 June greeting a cast that had sung and acted so very well together and seemed the best of friends away from the performance – I wonder what Volle said to Howell that had him laughing come the Company curtain-calls, and the embrace between Eichenholz and Pappano suggested that she will be back. I hope so! Lulu (the opera), too – this is a production for our time and any time; that’s why it doesn’t need to be as specifically staged as some had wished for. Agree or not that the production really works, it will sound great on BBC Radio 3 on the evening of Saturday 4 July.