In May 2008, Peter Joelson talked to conductor Mark Fitz-Gerald about Shostakovich’s film music, with particular reference to “Odna” (Alone)… 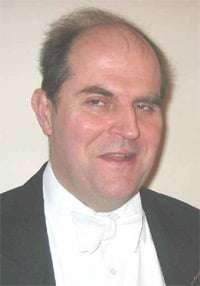 After reconstruction from the soundtrack and research into the composer’s manuscripts, Shostakovich’s score for the film “Odna” (Alone) has been released on Naxos (8.570316; 80 minutes), the “World Première Complete Recording” with Mark Fitz-Gerald conducting the Frankfurt Radio Symphony Orchestra.

“Odna” tells the story of a young and newly-qualified teacher, Kuzmina, who leaves her fiancé to travel to the Altai on the Mongolian border to bring the benefits of Soviet education to an outlying area. She falls foul of the locals who would rather their children helped with the animals than waste time in school, and when they decide to get rid of her she is left abandoned in the snow until rescued by a Soviet aeroplane.

Mark Fitz-Gerald first conducted while still at school in Dulwich, where he studied bassoon, contrabassoon and double bass. Mrs Dorothy Crump, who lived near to his home, had an enormous collection of scores and held regular sessions where musicians could get together and play through the orchestral repertoire. She often passed over the baton, so enabling Fitz-Gerald to get early conducting experience. At the Royal College of Music, he studied with, among others, Norman Del Mar, and won most of the prizes for orchestral and operatic conducting. An early invitation from Hans Werner Henze to take part in the first Cantiere Internazionale d’Arte, in Montepulciano, led to regular conducting engagements with the Basel Sinfonietta.

Fitz-Gerald was Music Director of Kent Opera from 1986, and has assisted regularly at Wiener Staatsoper. He conducted “The Cunning Little Vixen” at the Volksoper, and has worked with Annetta Hoffnung on many Gerard Hoffnung concerts at Royal Festival Hall and Barbican Hall, as well as in Europe and Japan. He has also appeared as guest conductor with a very long list of orchestras and was associate conductor of the orchestras in Porto and Strasbourg, and the Opera du Rhin. 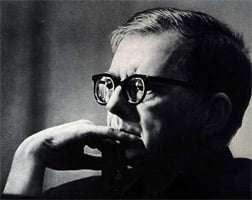 “I have been interested in film music all my life and while I was Artistic Director of the RIAS Jugendorchester from 1983 to 1987 we put on what were thought of as an innovative series of Filmharmonic Concerts to some acclaim both for the concerts and the subsequent CDs. I returned there in 1992 to continue the series with the Berlin Rundfunkorchester and since then have performed the task of providing music for silent films, live with orchestra, in Germany and around the world. We played, among other composers, plenty of Korngold and Waxman, the latter’s music having to be reconstructed by his son John Waxman as all the parts had been destroyed by the film studios who owned them. Luckily there were lists showing which players and instruments were at which sessions and this made the task of rebuilding the music easier.

How did you get interested in Shostakovich’s film music?

Shostakovich wrote a huge amount of music for films and must be considered a major composer for the cinema. He wrote more for the cinema than for any other genre and his writing is very sophisticated. Often he writes music at odds with the scene but matching what is going on in the character’s mind.

The first of his films with which I was involved was “New Babylon” (1929) and provided the live music with orchestra for its screening. We did the Japanese premiere in Tokyo in 2000 at the Tokyo Summer Music Festival where it was very well received.

The following year it was presented at the Gergiev Festival in Rotterdam, and, as Gergiev was stranded in the USA – all flights being grounded due to 9/11 – Maxim Shostakovich conducted his father’s Fourth Symphony. In passing, the question of “New Babylon” arose, Maxim Shostakovich commenting “it’s a very difficult score to conduct”. After a screening of “Odna” in Rotterdam, Theodore van Houten sowed the seed for investigating its score, and later, in March 2002, he arranged for me to meet Irina Shostakovich at Krzysztof Meyer’s house in Germany, and with her encouragement I decided to reconstruct the score for later performance with a screening.

What problems did you come up against?

The initial big problem is that a whole reel is still missing, and some of the music for other scenes was absent. The film was originally to be a silent one, and the change to a talkie with inter-titles was made some time after shooting had started. It was to have been Russia’s first talkie, but was just pipped by two pieces of Soviet propaganda about industrialisation. Only a very small number of cinemas were equipped to show talkies (with the sound) and of the few prints made, no copies of the reel where Kuzmina is abandoned in the snow survived the bombing of Lenfilm in Leningrad, and no copies have so far appeared in film archives.

However, the music from the finale turned up after some research, as Shostakovich the re-cycler had used some of it, that which was missing from the file, for the prelude to the ballet The Limpid Stream.

The rest of the missing music was reconstructed from the soundtrack, which was a difficult task as the quality of the sound for the film is very poor. Shostakovich himself was very disappointed at the time, as he felt that all the hard work of writing and the orchestra’s playing had gone for nothing. The whole reconstruction took eight months, the most difficult three minutes’ reconstruction taking a whole month on its own. The CD of the premiere of the original score contains almost eighty minutes of music. We recorded this in conjunction with a live performance. The Frankfurt Radio Symphony Orchestra was wonderful to work with, and the musicians are a very hard-working lot; when I arrived before rehearsals, I would find groups of the orchestra practising together determined to do a good job as they were so engaged with the project.

There are several interesting aspects to the music. Shostakovich uses the then recently invented theremin to provide eerie wailing for the depiction of the desolate landscape when the snowstorm starts, and he wrote a part for an overtone-singer which appears when scenes of Leningrad change to scenes of Kazmina’s arrival in the vast and empty landscape of the Altai. We were fortunate to have the expertise of Mark van Tongeren, whose book on the subject includes overtone-singing from around the world. Overtone-singers use their throats to produce two sounds at once, the lower being a drone and the upper a melody from the wide range of overtones or harmonics. In the Altai, throat-singing was connected with epic recitation; shortly after the film was made, the religious and cultural traditions of Russia’s tribal people were repressed or changed by the Soviet authorities and have been revived only recently. 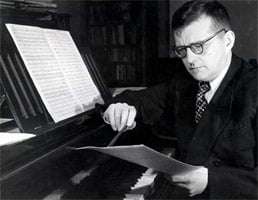 What of Shostakovich’s other film scores?

I’ve been involved with “New Babylon” for some years now. The young Shostakovich, only 23, had some trouble with this film, as the censors had at the last minute made large cuts which in turn affected the music. Copying errors and musicians unused to the adventurous writing made something of a headache for him. However, the directors were pleased enough to ask him to score “Odna”, as long he simplified his style to a degree.

The next film “The Golden Mountain” (1932) has a wonderful score for large orchestra. After 1936, the year of the trouble with his opera “Lady Macbeth of the Mtsensk District” Shostakovich felt restricted. However, as the diversity of his music decreased the concentration of its message increased, sometimes with hidden messages. John Riley, who contributed the notes for the CD release, has written a book “Dmitri Shostakovich: A Life in Film” (KINO – Russian Film-makers’ Companions) which is a very useful guide to the many film scores.

Shostakovich wrote no more serious opera, and, afraid of sudden arrest, took to carrying soap and a toothbrush about with him. One amusing bit of writing occurs in “The Fall of Berlin” (1949) in which, during the marriage of Hitler to Eva Braun, Mendelssohn’s ‘Wedding March’ is played.

What recording plans do you have?

I’m working on the music for “Podrugi” (Girl Friends or Girl Comrades) written in 1934, one of the last pieces of music Shostakovich wrote before his denunciation. The score here is interesting in that it has his first experiments in writing original music for string quartet, some of which music he recycled in the first string quartet of 1938.

This score will be coupled on a forthcoming recording with the Polish National Radio Symphony Orchestra with incidental music for two plays. The first is “Rule Britannia” (1931), an anti-capitalist tale about a Northern English businessman who takes advantage of his workers. The other is “Salute to Spain” (1936); this is on the subject of the Spanish Civil War. Finally, we are going to record the movement which is thought he wrote for the first version of the Ninth Symphony, which had been planned to have the architecture of Beethoven’s Ninth, with a choral last movement.