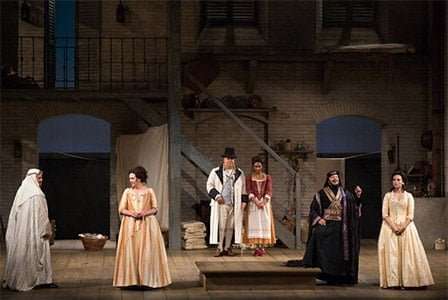 Wolfgang Amadeus Mozart’s third collaboration with master-librettist Lorenzo Da Ponte was also his last. After the elaborate dramas of its two predecessors, Le nozze di Figaro and Don Giovanni, Così fan tutte (1790) is a chamber piece for just six singers, fattened by only the briefest of choral interventions along the way.

In his memoirs Da Ponte was curiously dismissive of Così, describing it as holding “third place of the three sisters that were born of that most celebrated father of harmony” (i.e. Mozart). It’s fair to say that from a purely dramatic point of view this is probably a reasonable assessment; but that is to belittle Mozart’s score, whose formal perfection is miraculous. Besides, third place among three masterpieces is still pretty good going.

Così is a tale of romantic shenanigans that’s founded, let’s admit it, on breathtakingly sexist attitudes to women. But, as with Shakespeare’s The Taming of the Shrew, we have to accept that artistic genius can outlive its own time even when political niceties do not.

In sunny Naples two young officers, Guglielmo and Ferrando, wax lyrical about the beauty and constancy of the sisters Fiordiligi and Dorabella, whom they respectively adore. The older and darkly cynical Don Alfonso persuades the boys to put their beloveds’ fidelity to the test by disguising themselves as strangers (Albanians!) and each attempting to seduce the other’s sister. Emotional mayhem ensues. 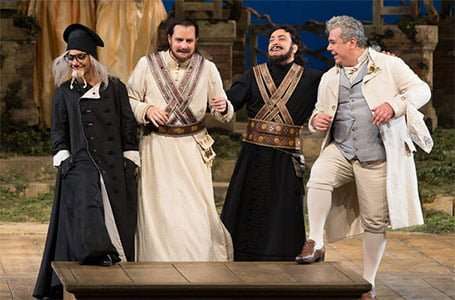 …a glorious succession of solo arias and ensembles. The Act One trio for Fiordiligi, Dorabella and Don Alfonso, ‘Soave sia il vento’ (Let the wind blow gently), is one of the most sublimely beautiful moments in all Mozart, while in Act Two Fiordiligi’s rage against her own emotional frailty, ‘Per pietà, ben mio, perdona’ (Please forgive me, my beloved), aches with self-lacerating anguish.

Metropolitan Opera’s Music Director James Levine returned to the helm last September after a two-year absence through spinal injury in order to conduct this revival of Lesley Koenig’s uncontroversial period production. He reappears now, seven months on, for further performances with an unchanged cast.

House favourite Matthew Polenzani sings the tenor role of Ferrando and Russian bass Rodion Pogossov is Guglielmo. They are partnered by the fast-rising soprano Susanna Phillips as Fiordiligi and Isabel Leonard as her sister, Dorabella. Baritone Maurizio Muraro sings the wily Don Alfonso.

The most interesting piece of casting is for the sisters’ maid, Despina, whom Don Alfonso lures over to the dark side. This mischievous role is taken by none other than Danielle de Niese – a singer who, for all her obvious glamour, possesses a bewitching naughty streak that should make her an inspired choice. Such a gleeful stage animal will surely revel in the scene where Despina has to impersonate a quack doctor.

The Met’s Così fan tutte will be broadcast globally, live in HD, on Saturday 26 April. Hand your political correctness in at the cloakroom and prepare to be elated by an exquisite musical experience.