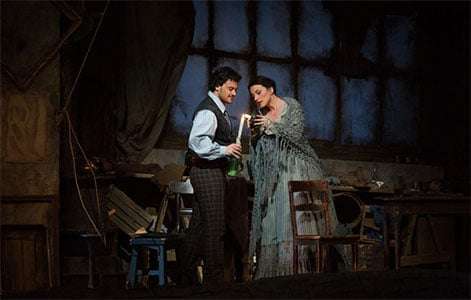 Giacomo Puccini, that’s who. But then you knew that, surely? La bohème has a fair claim to be the most popular opera in the repertoire, and deservedly so. Not even the composer of Turandot and Tosca ever quite surpassed this economical heartbreaker, so small wonder it’s the most-performed opera of all time at the Met.

This adaptation of a French play by Henri Murger is a relatively early work that appeared (in 1896) following a handful of modest early successes and just after the breakthrough triumph of Manon Lescaut. La bohème was the real deal, and it paved the way for several more helpings of star-crossed love, not only Tosca but also Madama Butterfly.

It’s the essential romantic love story. Handsome young poet starving in a garret meets fragile waif in need of someone to warm her tiny, frozen hand. It all ends in tears, but not before a rousing dinner and a night of desolation amid the Parisian snow.

…aria after sublime aria. Act One closes on the most ardently persuasive depiction of love at first sight in a three-way scena for Rodolfo (our hero) and the eponymous Mimì. She answers his “Che gelida manina” by introducing herself (“Sì, mi chiamano Mimì”) and then they close the act with a declaration of their love, “O soave fanciulla”.

Act Two is a rumbustious affair with the stage overflowing with colour and some high-spirited ensemble work that culminates in Musetta’s irresistible waltz, “Quando me’n vo’”. Act Three has a claim to be the crowning moment in all Puccini: it’s an atmospheric evocation of winter, both literal and interior, as the two lovers’ anguish is punctuated by sporadic flares from the fierier relationship of Musetta and Marcello. 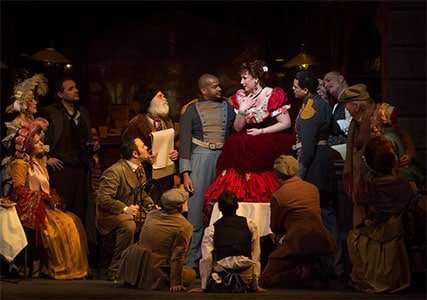 Franco Zeffirelli’s venerable production has been a Met staple for many years, and it’s easy to see why. Set firmly in period, grand in scale yet intimate and ultra-romantic, it mirrors Puccini’s score every step of the way and provides the ideal backdrop for an evening of Italianate fervour.

As a romantic Puccini hero Vittorio Grigolo leads the field today, and Rodolfo is his calling card. He is partnered by Romanian soprano Anita Hartig, who has sung Mimì the world over, not least for Welsh National Opera and the Royal Opera, while Met favourite Susannah Phillips sings Musetta (sharing the role with Jennifer Rowley) and Massimo Cavalletti appears as Marcello. Look out, too, for British stalwart Donald Maxwell in two character cameos as Benoît and Alcindoro. Stefano Ranzani conducts.

The Met’s La bohème will be broadcast globally, live in HD, on Saturday 5 April. Zeffirelli’s elaborate designs always catch the eye and are guaranteed to look splendid in High Definition. A marvellous night in prospect, then – for opera virgins and veterans alike.