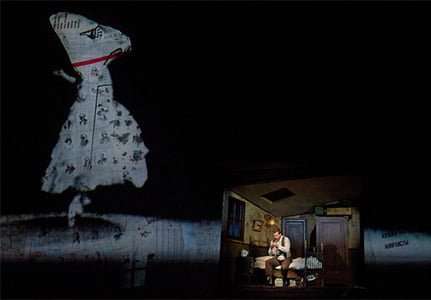 Like Eugene Onegin, the Met’s most recent global broadcast, The Nose is Russian to its very septum. Written in the late-1920s, the twenty-one-year-old Dmitri Shostakovich adapted it from a satirical short story by Nikolai Gogol, author of Diary of a Madman and The Government Inspector.

One morning Major Kovalyov wakes up without his nose, with just a flat patch on his face where it used to be. His nose has gone walkabout and is masquerading as a human being. Kovalyov tracks down his former proboscis and confronts it in a cathedral, but such is the olfactory organ’s newly acquired social status it thumbs its, er, nose at its former owner.

After that the plot gets a bit silly. At heart it’s a nasal spray of Voltaire, Kafka, Ionesco and Wedekind seasoned with a sniff of Bulgakov. But there’s no need to intellectualise it. 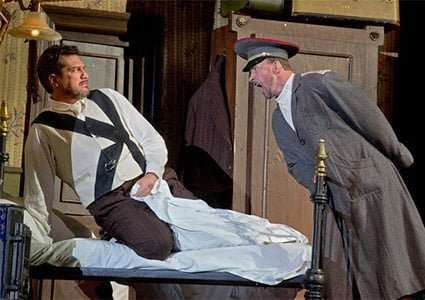 …a score that chugs, crunches and slithers its way through a couple of concentrated hours with few pauses for breath. Yet the musical language is always approachable: texturally rewarding, laden with originality and humour and not remotely forbidding. This is the Shostakovich of the First Symphony: rumbustious but prepared to touch the emotions even in a tale as absurd as this. Kovalyov’s arias are particularly striking, several of them underpinned by bittersweet, diaphanously delicate accompaniments.

How to see The Nose if not in New York City?

The worldwide Live HD broadcast into cinemas is on Saturday 26 October. In the house itself the matinee starts at 1 p.m. and, for example, begins five hours later in the UK. The performance will be sung in Russian with English subtitles.