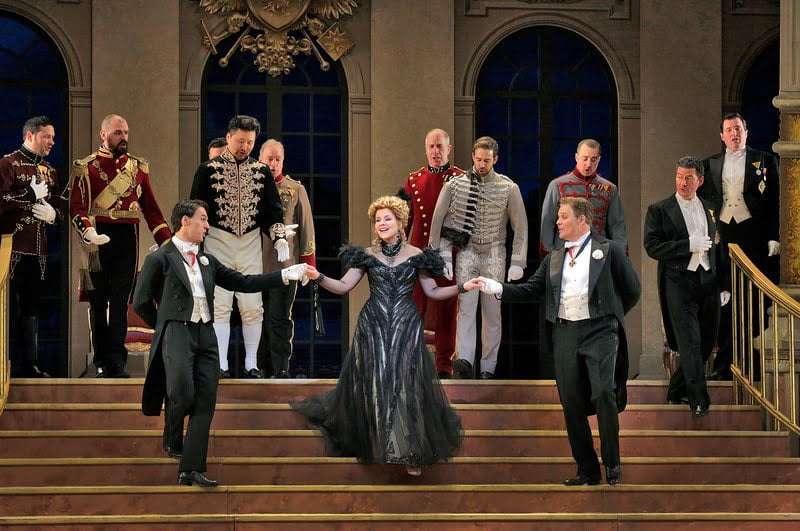 Who wrote it?
This is the most famous of the operettas composed by Franz Lehár, and certainly the only one that has a major hold within the operatic repertory, although Giuditta retains a toe-hold in some European houses.
The Merry Widow was premiered in Vienna in 1905 and has been popular ever since. The plot is based on a mid-19th-century comedy play entitled L’attaché d’ambassade written by Henri Meilhac, a writer most famous these days for being one of the librettists of Bizet’s Carmen. Lehár’s score is tuneful and frothy and offers many vocal and comedic opportunities for the principal singers.

What’s it all about?
The story revolves around the wealthy young widow Hanna Glawari who hails from Pontevedro. From a poor background she married into a fortune that she inherited on the death of her elderly husband.
Currently resident in Paris she has a swarm of gentlemen admirers who she knows are variously attracted to her but perhaps more to her wealth. The Pontevedroan Ambassador, Baron Zeta, is keen she should marry a native rather than a Parisian, to ensure the money does not leave his country. He hopes that she will fall in love with Count Danilo, a young attaché to the embassy.
However, Danilo and Hanna were lovers before she was married and their relationship is somewhat spiky – even though they remain besotted. She wishes he will admit his love for her. He has become something of a roué in Paris, spending much of his time drinking and flirting with the grisettes at Maxim’s Cabaret.
The second strand to the plot concerns Zeta’s wife, young Valencienne, who has been conducting a flirtation with the French aristocrat Camille du Rosillon. Their relationship threatens to be exposed as Rosillon has written “I love you” on her fan, which she has mislaid and which has come into her husband’s possession. He believes the fan to belong to another woman to whom he intends to return it. The plot therefore revolves round the two intrigues, which become intricately entwined as the plot unfolds. Only Hanna is fully aware of this – how will she play her cards to achieve her ends…?

Look out for…
Lehár’s intoxicating music has lots of light and shade, great dance numbers, wonderful ensembles, and a slow waltz that depicts the love of Hanna and Danilo. There is a famous aria, ‘Vilja’ sung by Hanna in the second Act – a love song of the fictitious Pontevedro. It requires artlessness, a creamy high soprano voice and a sure sense of line to bring it off well. There are dances a-plenty, and the tenor has some high-flying moments. In short – this is classic operetta! 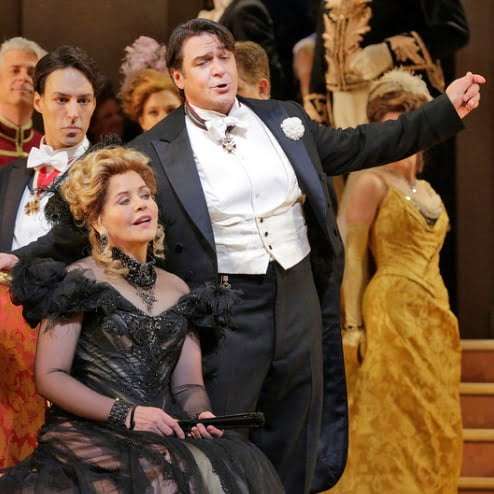 Who’s in it?
The title role is sung by superstar Renée Fleming. Her good looks and velvety voice should be ideal for the part. American baritone Nathan Gunn sings the role of Danilo, a role for which he would seem ideally suited. American soprano Kelli O’Hara takes on the soubrette role of Valencienne, in her debut season at the Metropolitan Opera. Sir Thomas Allen is taking the short but important role of Baron Zeta, and tenor Alek Shrader is Camille du Rosillon. The Metropolitan Opera Orchestra will be conducted by Sir Andrew Davis, This charming operetta will be presented in an English translation by Jeremy Sams, well known for his witty versification!

When’s it on?
If you are in New York City then the matinee is live at the Met itself, starting at midday, otherwise it is internationally cinematic on Saturday January 17 – from 5.55 p.m. in the UK