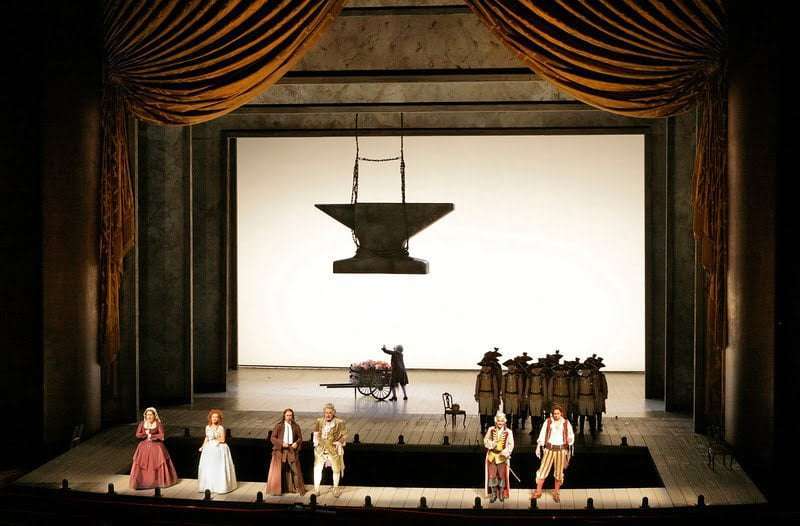 One of the most popular of operatic comedies, Rossini’s The Barber of Seville (1816) continues to charm audiences worldwide, as well as attract top-notch singers to put their imprint on the five major roles. Odd then that the initial performances were a fiasco, although this was largely due to the composer Paisiello and his supporters apparently carrying out a campaign to discredit the work as he had composed an opera on the same subject some years earlier! The libretto of the Rossini, written by Cesare Sterbini, has a plot based on a play by Beaumarchais; indeed it is the story that preludes the action of Mozart’s The Marriage of Figaro also derived from Beaumarchais.

Not surprisingly, the action takes place in and around Seville! The wealthy Count Almaviva is in love with Rosina, but in his courtship of her he is keeping his true identity a secret. She knows him only as her “Lindoro”. Unfortunately, she is a ward of the elderly and irascible Dr Bartolo who himself has plans to marry her and thereby take control of her large dowry. He attempts to keep her locked up and unable to communicate with the world.
The only person who has occasional access to the house is the local barber, Figaro, who is also the messenger for the townsfolk (for a fee!). He becomes the go-between between Almaviva and Rosina, pitching himself against Dr Bartolo and also the music master Don Basilio, the local gossip.
Don Basilio and Bartolo are hatching a plan to discredit Almaviva. He gains access to Bartolo’s house disguised as a drunken soldier, allegedly slated to be billeted there. Pandemonium ensues and the local military arrives to intervene. Bartolo produces a certificate of exemption to house soldiers, but Almaviva, when arrested, reveals his true identity to the Captain causing panic in the ranks of his own regiment!
Almaviva later turns up in another disguise, as Don Alonso, a singing teacher and apparent pupil of Don Basilio. He gives Rosina a lesson in the presence of Bartolo, at the same time arranging for an elopement. Don Basilio arrives unexpectedly, but departs following the receipt of a huge financial incentive. Rosina is persuaded by Bartolo that her “Lindoro” is in fact a servant of Almaviva, and that she is to be abducted.
When Figaro and Almaviva arrive to facilitate Rosina’s escape, and marriage, she angrily confronts them. Almaviva reveals his true identity, but the delay causes their escape to be foiled. Basilio is duped into witnessing the signing of a marriage contract before Bartolo can intervene. The lovers are united and Figaro also receives his reward! 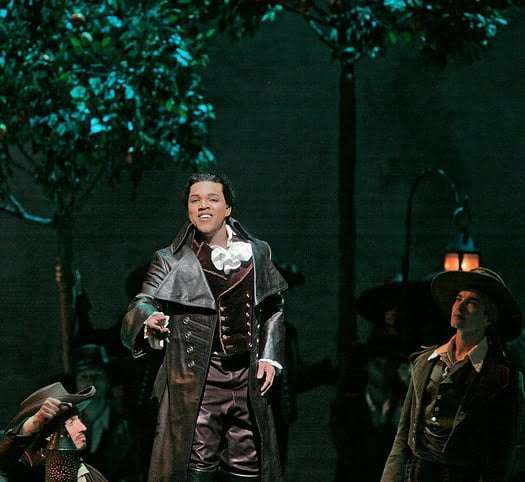 Rossini’s music has a liveliness and tunefulness that is immediately captivating. He had an extraordinary output, but was not above the odd bit of re-cycling. The familiar Overture also serves in that position for two other Rossini operas – and both on serious subjects!
Of the Barber’s major characters, each has at least one showpiece aria and there are duets and witty ensembles aplenty. All the roles require the singers’ ability to decorate the line with florid embellishments – part of the tradition of the time. Another characteristic of some of Rossini’s comic operas is the use of orchestral interludes, which were a mechanism for scene changes. The stormy one in The Barber is a classic!
Figaro is a baritone role, and his entrance is to the famous ‘Largo al factotum’ – “Figaro, Figaro, Figaro…”. Dr Bartolo, a buffo bass role, also has a fiendish patter section in his aria. Don Basilio is also a bass role and his big moment is the aria ‘La calumnia’, describing how gossip, indiscreetly spread about, can grow and engulf the target individual in a deluge of bad press; a slow whisper grows to a loud and climactic conclusion.
Rosina herself has ‘Una voce poco fa’ for her first appearance. She describes how, though she may look demure and innocent, she is a viper and a force to be reckoned with. The role was originally written for mezzo-sopranos, though sopranos have appropriated it with transpositions of key. Possibly the hardest role is that of Count Almaviva for it requires a tenor of grace and extreme agility and one with a secure top range. He must be able to characterise Almaviva’s various disguises well too.

Figaro (the barber) is Christopher Maltman, well known for his interpretations of comic and dramatic roles as well as for his prowess as a Lieder singer. Bel canto specialist Lawrence Brownlee sings Almaviva, a role for which his agile, attractive tenor will be ideally suited. Veteran Georgian bass, Paata Burchuladze, will be a cavernous voiced Don Basilio, a role he has sung with huge successes throughout his career. Maurizio Murano will be Bartolo and the rich-voiced American mezzo Isabel Leonard will be the spirited Rosina – a part she has made her own in recent. Michele Mariotti conducts. This is as impressive a line-up as could be realised today, and the performance promises to fizz with energy!

Saturday November 22. If you are in New York City then the matinee is live at the Met itself, otherwise it is internationally cinematic – from 5.55 p.m. in the UK.