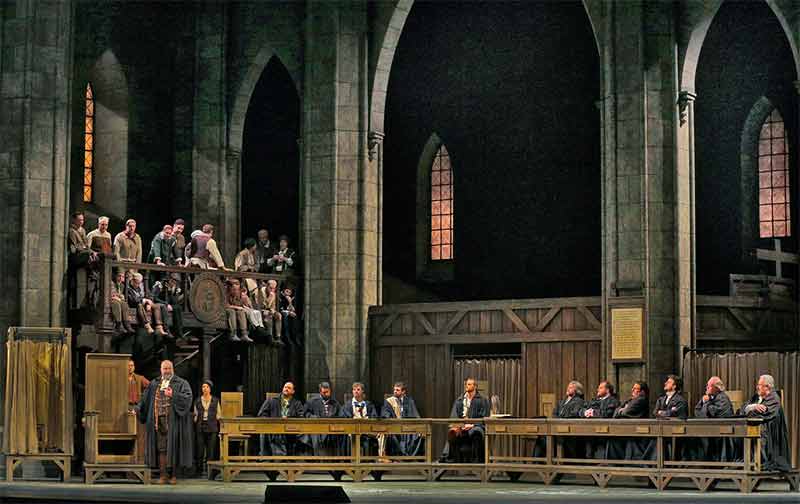 Die Meistersinger von Nürnberg is the only comedic opera in Richard Wagner’s mature output, although his early Das Liebesverbot was composed with elements of comedy in mind. It is though hardly performed. The Mastersingers, however, has been popular since its Munich premiere in 1868. In the right directorial hands and with a cast of well-matched singers it can feel much shorter than its four-plus hours of music.
As with all his established stage-works Wagner wrote his own libretto; and this is one of his best. The characters are all human beings living out their lives in the Nuremberg of the sixteenth-century. The central role, the wily and wise cobbler come artist-poet Hans Sachs, is based on a true-life figure – indeed there are statues of the man in Nuremberg to this day.

The plot is a love story in essence, but also there are philosophical discussions about the value of high art to society and of music, singing and poetry (and perhaps opera therefore). Paintings and visual art are also cited in the libretto – Dürer for example. Wagner’s arguments are that although history and convention are important for keeping art alive and flourishing, true creativity can be stifled by this – therefore freedom of expression and the need to experiment are important. Wagner viewed himself as a much misunderstood creative genius who liked to push the boundaries, and so his empathy for Hans Sachs and his views are much in evident.

Wagner’s successors have also written works on some of these themes – Richard Strauss’s Capriccio is a debate about the relative importance of words and music in opera, Hindemith’s Mathis der Maler concentrates on the life of a painter, and Hans Pfitzner’s Palestrina depicts the dilemma of that composer writing polyphonic church music in times when it was dangerous so to do.
Wagner addresses these subjects with perhaps more subtlety and lightness of touch. That being said, Mastersingers is not without its controversy. Some have interpreted the negative aspects of the personality of the town-clerk Beckmesser as being anti-Semitic, and in the Nazi period Sachs’s final oration about German art and culture was used as propaganda, although it can be argued that the message is one of inclusivity. 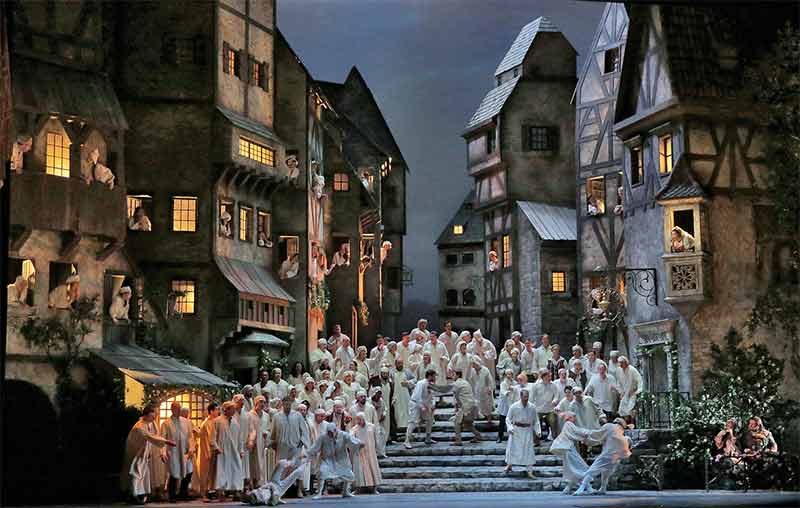 The action takes place in and around Nuremberg. Walther von Stolzing, an aristocratic knight, is in love with Eva, the daughter of the wealthy goldsmith Veit Pogner. Pogner is a member of the Guild of Mastersingers, an amateur society of artisans who have struggled to keep their artistic inheritance alive by promoting the best, according to a strict set of rules. Pogner has decided that Eva should marry, and he offers her as a prize for a singing competition – she does have the option to decline the winner, but a Mastersinger he must be.
Of the current Guild only Beckmesser and Sachs are eligible. The latter is fond of Eva, but as a widower and owing to his age, his feelings, however strong, are perhaps more paternal, as he comes to realise. Beckmesser is self-delusional. Walther is not a Mastersinger, and as an aristocrat is unlikely to be a member of a Guild for working men! Sachs’s apprentice David tries to teach Walther the rules of singing and improvisation. Walther then submits himself to the test. His artistic boldness is not appreciated by the collective Mastersingers, although the judgement is left to the biased Beckmesser, despite Sachs’s protestations.

Walther then plans to elope with Eva, but the plotting is overheard by Sachs. Beckmesser arrives to serenade Eva – in fact the figure at the window is her maid Magdalene who is betrothed to David. Sachs interrupts Beckmesser’s musical offering with his hammer beats until a compromise is reached – Sachs will only hammer his leather on the last when Beckmesser breaks the rules of song, which he does rather often.
Eva and Walther’s passage to freedom is thus prevented. The noise in the street wakes David who, recognising Magdalene in the window, causes a riot in which the whole town becomes embroiled. The next day the sleep-deprived townsfolk emerge. Walther has stayed in Sachs’s house and comes downstairs refreshed from sleep and inspired. He improvises a new song which Sachs writes down. Beckmesser steals the song, but is caught by Sachs who gives him permission to use it. Beckmesser makes Sachs swear never to say it is Sachs’s own.
Sachs also witnesses the love between Eva and Walther and reluctantly recognises he cannot marry her. The townsfolk march to the hills to witness the singing competition. Beckmesser makes a howling mess of his song, and blames it on Sachs – who of course swears he is not the author, but he can reveal who that person is… 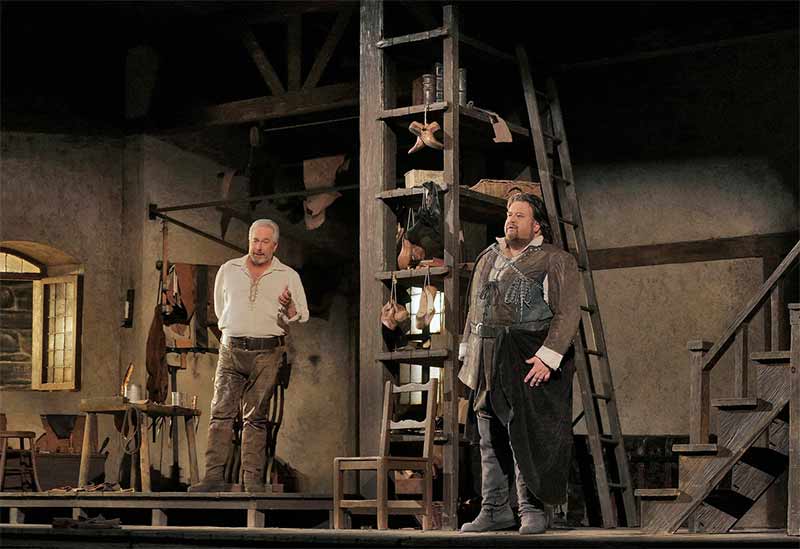 Wagner’s music is his most sunny and heartfelt. The Prelude to Act One, full of contrapuntal use of the leitmotifs (musical ideas) of the opera, is justifiably famous. Walther’s two ‘trial’ songs are also popular extracts for tenors, despite their taxing nature. Sachs also has two celebrated monologues where he muses on the follies of mankind. Best of all is the ‘Quintet’ in the final Act where Eva, Walther, Sachs, David and Magdalene all express their conflicting emotions before they head off to the competition.

This is a star-studded cast conducted by James Levine, the long-serving music director at the Met. The production is a much-loved staple of this house, traditional of course since the director is Otto Schenk and the designer Gunther Schneider-Seimssen.
For the broadcast, Sachs is sung by Michael Volle, who has recently taken the role into his repertoire. He has previously sung Beckmesser to great acclaim in Katarina Wagner’s highly controversial production in Bayreuth. Heroic tenor Johan Botha sings Walther, and will be partnered by the lovely Eva of Annette Dasch, a Bayreuth regular of the past few years. Johannes Martin Kränzle is one of today’s best interpreters of Beckmesser, and there is luxury casting for Pogner with Hans-Peter König. Karen Cargill plays Magdalene and Matthew Rose takes the small but crucial role of the Night-watchman.

If you are in New York City then the matinee is live at the Met itself, starting at midday, otherwise it is internationally cinematic – from 5 p.m. in the UK and, with two intervals, a running time of close on six hours.