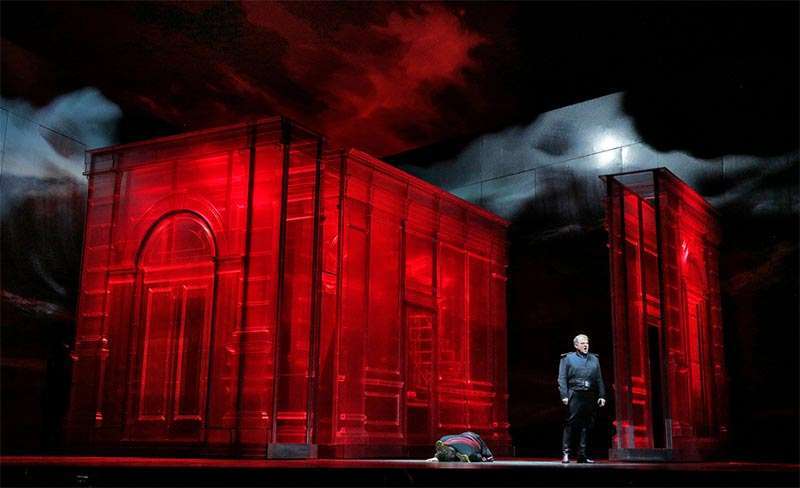 Who wrote it?
Otello marks the start of Giuseppe Verdi’s late burst of energy when he composed his final two operas, both based on Shakespeare, the other being Falstaff. Both had librettos skilfully adapted from the originals by Arrigo Boito – himself a composer. After Aida (1871) Verdi had planned to retire, and it took a great deal of cajoling on the part of his publishers, Ricordi, to lure him into action, though once a satisfactory outline of the libretto was agreed Verdi sprang into action in late-1884, completing Otello in the subsequent two years. It was first performed in February 1887.
The music itself is a break from Verdi’s previous style with each Act being less divided. Otello was a resounding success, and has held the stage ever since, although tenors capable of doing complete justice to the demanding title role are generally in short supply.

What’s it all about?
Boito’s libretto is a skillful adaptation of Shakespeare’s drama Othello. It dispenses with the first Act, set in Venice, and concentrates purely on the action in the military fortress on Cyprus. The opera commences with a storm during which Otello and his fleet are sailing through treacherous seas to reach the island following a military victory. Shipwreck is avoided and there is general rejoicing.
Otello greets the islanders and heads away to meet his new wife Desdemona. His ensign Iago, a man consumed with jealously of and hatred for Otello, encourages the unwilling young captain Cassio to drink, getting him tipsy and belligerent. He then prevails upon Rodrigo, infatuated with Desdemona, to trigger a brawl with the drunken captain. As this escalates various other officers of Otello’s forces become embroiled and violence erupts. Only Otello’s appearance restores order, but Cassio is summarily demoted.
The scheming Iago persuades Cassio to speak to Desdemona to persuade her to intercede for the restoration of his position; but then artfully persuades Otello that Cassio is a potential rival for Desdemona’s affections. When Desdemona pleads for Cassio Otello impatiently brushes her aside, and she drops her embroidered handkerchief, a love-token given to her by Otello. This is picked up by her maid, Emilia, Iago’s wife, but Iago wrests it from her against her better judgement. Left alone with Otello, Iago insinuates that he has seen Cassio, who was an intermediary between Otello and Desdemona during their courtship, with the handkerchief. This provokes Otello into violence. 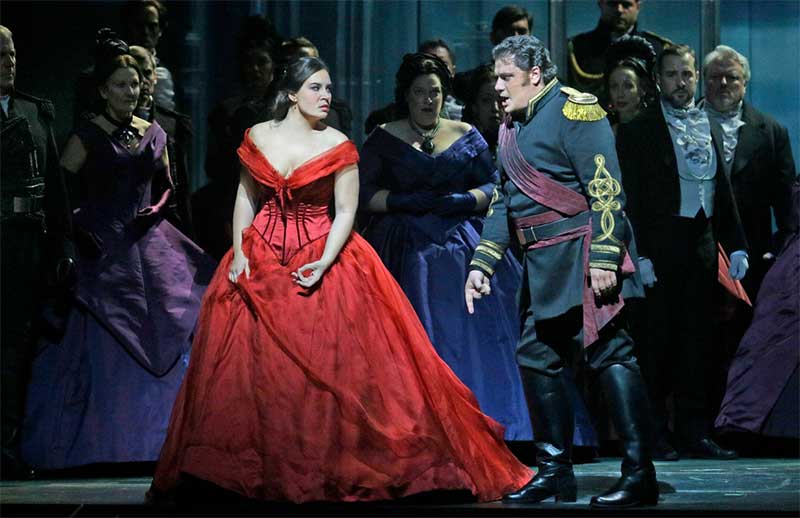 News arrives of the forthcoming arrival of an ambassadorial visit from Venice. Otello and Desdemona clash when he asks to see the handkerchief and she cannot produce it. Innocently she tries to plead for Cassio, provoking Otello to insult her. She leaves distressed. Iago suggests Otello hide whilst he talks with Cassio. He has left the handkerchief in Cassio’s lodgings and Cassio is persuaded to reveal the object – he is observed by Otello who sees this as proof of Desdemona’s infidelity. Otello and Iago plot to murder both Cassio and Desdemona.
The Venetian ambassadors arrive with a message from the Doge. Otello is recalled to Venice and Cassio is to assume the governorship of the Cyprus fortress. Otello publically insults Desdemona to the distress of all. The final Act sees Desdemona unhappily reminiscing on her past love and revealing a sense of foreboding. Emilia leaves her as she prepares for sleep. Otello enters the bedchamber and suffocates his wife. A knock is heard at the door. It is Emilia informing that Cassio has killed Rodrigo. Desdemona’s last cries are heard. Otello explains to Emilia that he has killed her because she was unfaithful, revealing that he has seen the handkerchief in Cassio’s hands. Emilia realises Iago’s plot and reveals to all what has occurred. Otello is disarmed of his sword, but commits suicide with a hidden dagger, dying at the feet of his innocent wife that he has murdered. 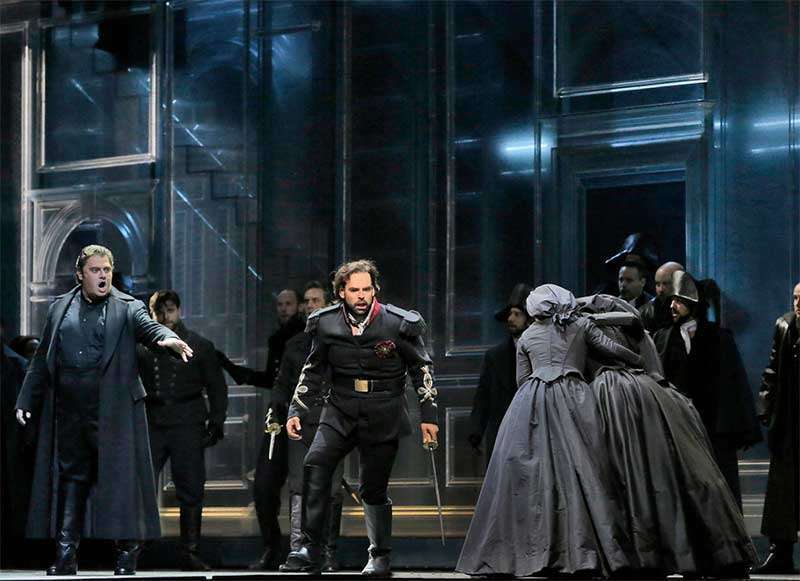 Look out for…
Otello has some spectacular highlights from the initial storm and the swirl accompanying Otello’s glorious entrance – “Esultate!”. There is a wonderful love duet at the end of the first Act between Otello and Desdemona – the only point at which we see them truly happy. Iago’s hair-raising “Credo” towards the start of Act Two establishes him as the malevolent force, and that Act concludes with a rousing duet between him and Otello as they swear allegiance and vengeance.
Verdi was concerned there should be an important role for the chorus and so the third Act concludes showing the arrival of the Venetian deputation and involving all the principals and chorus. The final Act is perhaps the most conventional, and the first section of it belongs to Desdemona as she sings the famous ‘Willow Song’. The theme associated with Otello and Desdemona’s amorous kisses ends both the first and final Acts to devastating effect.

Who’s in it?
The production being transmitted is by director Bartlett Sher. The title-role is taken by one its leading exponents, the heroic tenor Aleksandrs Antonenko. His ringing top notes and his keen dramatic abilities make him a worthy successor to Plácido Domingo and Vladimir Atlantov in this demanding part. The role of Desdemona is given to the rising soprano Sonya Yoncheva. Her Metropolitan debut as this character has been keenly anticipated. Iago is undertaken by the thrilling baritone Željko Lučić. His huge and beautiful voice allied to his imposing physical appearance should make him ideal casting. The Metropolitan Opera Orchestra will be conducted by Yannick Nézet-Séguin. It is a cast and ensemble fully worthy of Shakespeare, Boito and Verdi!

When’s it on?
If you are in New York City then the matinee is live at the Met itself. Otherwise it is broadcast to cinemas on Saturday October 17.