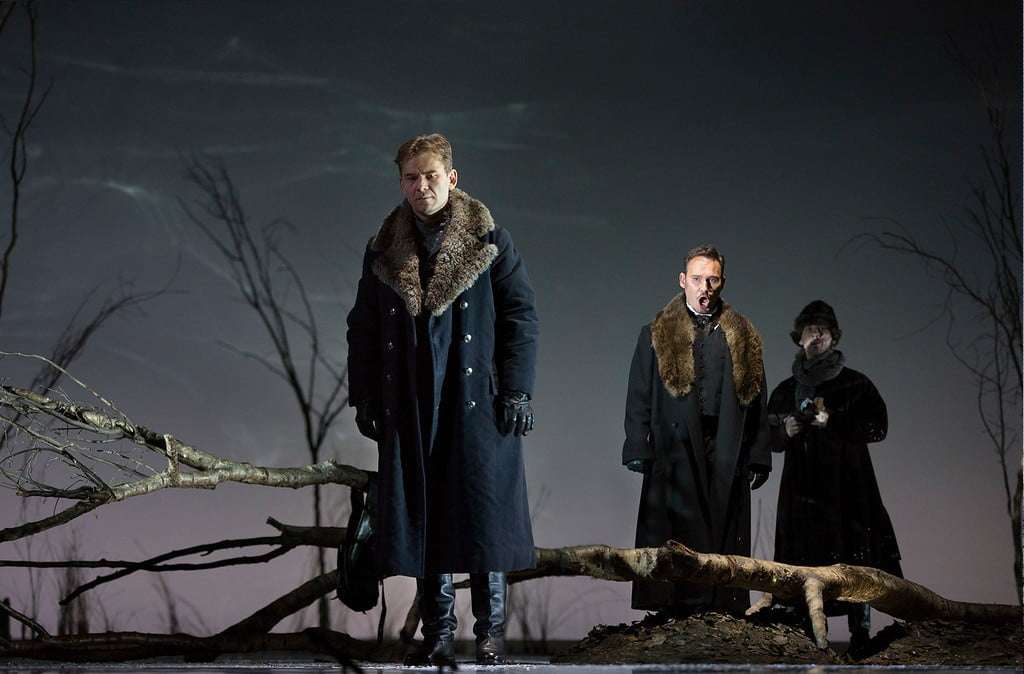 Ask people to name a Russian opera and the chances are that they will say Tchaikovsky’s Eugene Onegin or Mussorgsky’s Boris Godunov. Both dispense with a progressive Act format and were composed as a succession of scenes. Tchaikovsky, as well as being an impressive symphonist, was a man of the theatre and composed three ballets (Nutcracker, Swan Lake, and Sleeping Beauty) and some ten operas.
Eugene Onegin is based on the eponymous novel – a popular romantic work at the time. With the assistance of Konstantin Shilovsky the composer produced his own libretto, which retains much of the verse of Pushkin’s original. The opera is full of lyrical music, great set-pieces for the protagonist lovers and fantastic cameo opportunities. There are episodes involving chorus and choreography – a country party and a society ball in St Petersburg, and these are contrasted with intimacy and isolation.
The work was premiered in Moscow in 1879 by students of the Moscow Conservatory – the characters of the novel are very young adults. The first Bolshoi production was two years later and the opera has been a staple since; o know it is to love it. 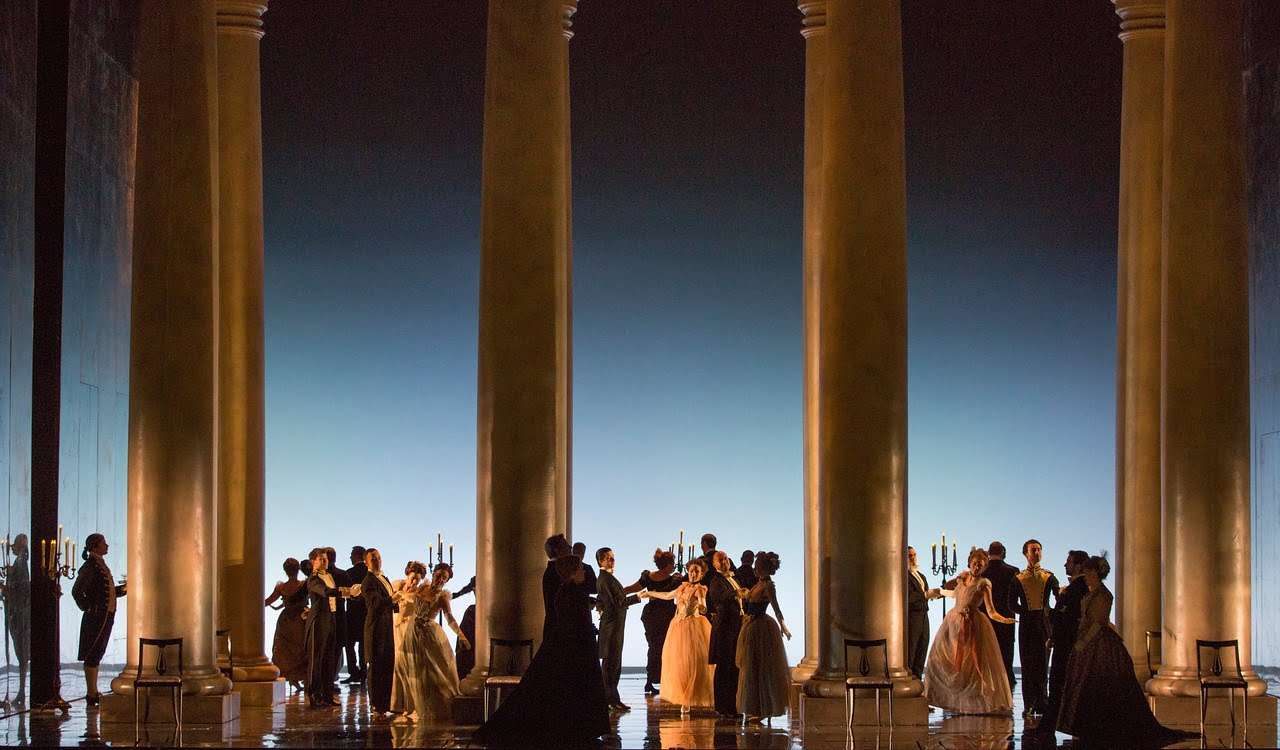 What’s it about?
The opera opens in the gardens of a country estate where Madame Larina and the Old Nurse listen to the former’s daughters Olga and Tatyana singing romantic songs. They reflect on their own youth. We soon meet the girls – Olga, the younger one, is playful and flirtatious whilst Tatyana is reserved, bookish and sensitive. Lensky, a poet who lives nearby, and his friend Onegin arrive. They take the girls off for a stroll. Lensky is engaged to Olga and they leave Onegin and Tatyana to converse. He is aloof and somewhat patronising, and yet Tatyana’s heart starts to stir. Foolishly, and guided by examples of the romantic heroines she reads about, she stays up all night and pens a declaration of love to Onegin which, unwisely, she arranges to be sent.
Onegin, on receipt of the letter comes to find Tatyana, who is by then agitated and remorseful. He tries to let her down gently, albeit in a somewhat distant manner, advising that he can offer only friendship and counsels her to be more cautious when expressing emotions in.
The fourth scene is the party held in honour of Tatyana’s name-day. Onegin’s disdainful attitude to country existence is commented on by gossipy women. Irritated, Onegin flirts with Olga to cause a stir. This infuriates Lensky who responds aggressively and jealously. Onegin tries to calm the situation, but inflames it; Lensky accuses him of being a seducer and challenges him to a duel. Lensky also publically repudiates Olga.

The duel takes place in secret. Before drawing pistols the men muse on their friendship and express a desire to be reconciled. Both remain proud and obstinate and neither takes to opportunity to halt proceedings. Shots ring out and Lensky falls dead.
The final scenes occur five years later. Onegin, following foreign exile, has returned to St Petersburg and is attending a ball. He reflects on his isolation and unhappiness when Prince Gremin is announced. Gremin and his elegant young wife enter. Onegin is astounded to find this aristocratic beauty is Tatyana. She is also affected by the reunion and overcome she politely requests her husband takes her home. Onegin realises he has fallen in love.
The final scene reflects the third one. This time it is Tatyana who has received the letter. She rebukes Onegin for his past behaviour and asks if he now pursues her as she has wealth and position. He denies this and desperately declares his love. Against all her inner emotion she must reject him – she is a married and determined to remain faithful. She leaves Onegin alone in despair. 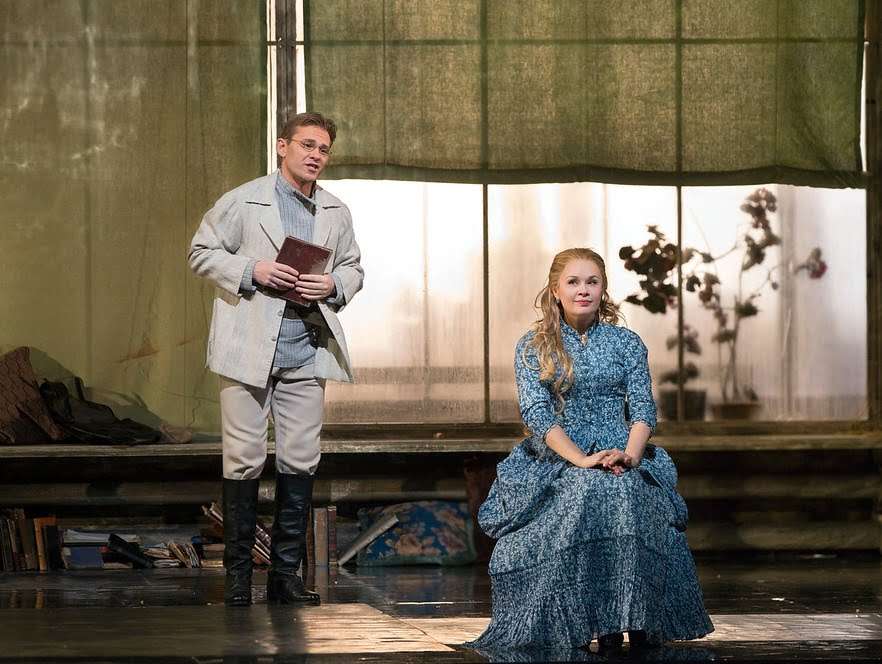 Look out for…
Probably the most famous episode is the second, Tatyana’s scena as she pens her letter to Onegin. This is a superb opportunity for the soprano – and also for the orchestra whose music gets more impassioned. Lensky’s aria before the duel is also famous – it has a plangent and elegiac quality that is very affecting. Both Olga and Gremin get one opportunity in the spotlight during which their flighty and solid natures are revealed respectively. The party scene – ostensibly the most conventionally operatic until the final one – is a fantastic chance for chorus and dancers to show off their skills as well as being a challenge to directors who have to keep myriad strands of action flowing and merging. The final scene is a heady mix of emotional abandon as Tatyana and Onegin tussle verbally over their futures. Onegin has seemed rather an unattractive and priggish young man – now he has a chance to let his emotions go…
Tchaikovsky’s music is tuneful, attractive and yet also manages to establish a sense of yearning and existential futility – a typical Russian quality. There are famous dance numbers, Waltz and Polonaise, as well. 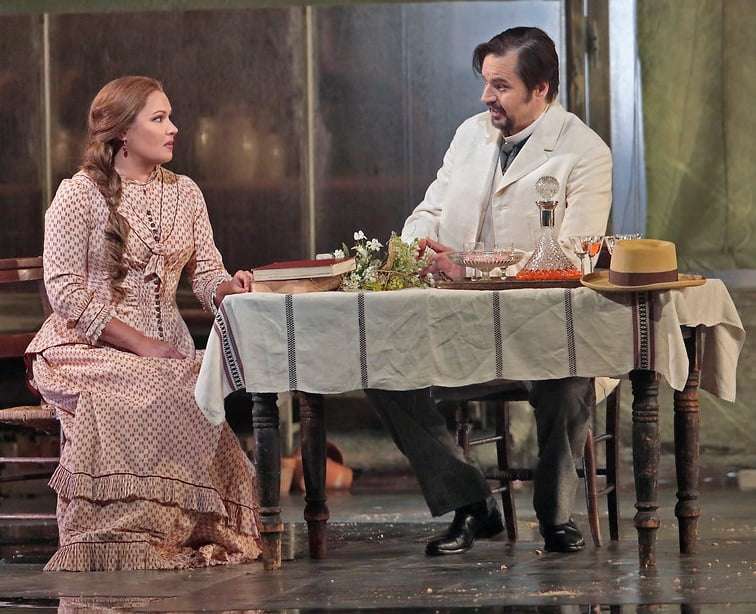 The great Swedish baritone Peter Mattei is singing the title role in this broadcast – it is one of his calling-cards and his return to it is eagerly anticipated. Opposite him, as Tatyana, is Anna Netrebko Her interpretation should be authentically Russian and will be the talk of the town! Elena Maximova, a compatriot, reprises her interpretation of Olga. Lensky is also cast with a Russian voice – that of Alexey Dolgov. Slovakian bass Štefan Kocán sings Prince Gremin. The staging is by Deborah Warner and is conducted by Glyndebourne’s music director Robin Ticciati.

When’s it on?
If you are in New York City then the matinee is live at the Met itself. Otherwise it is broadcast to cinemas on Saturday April 22.