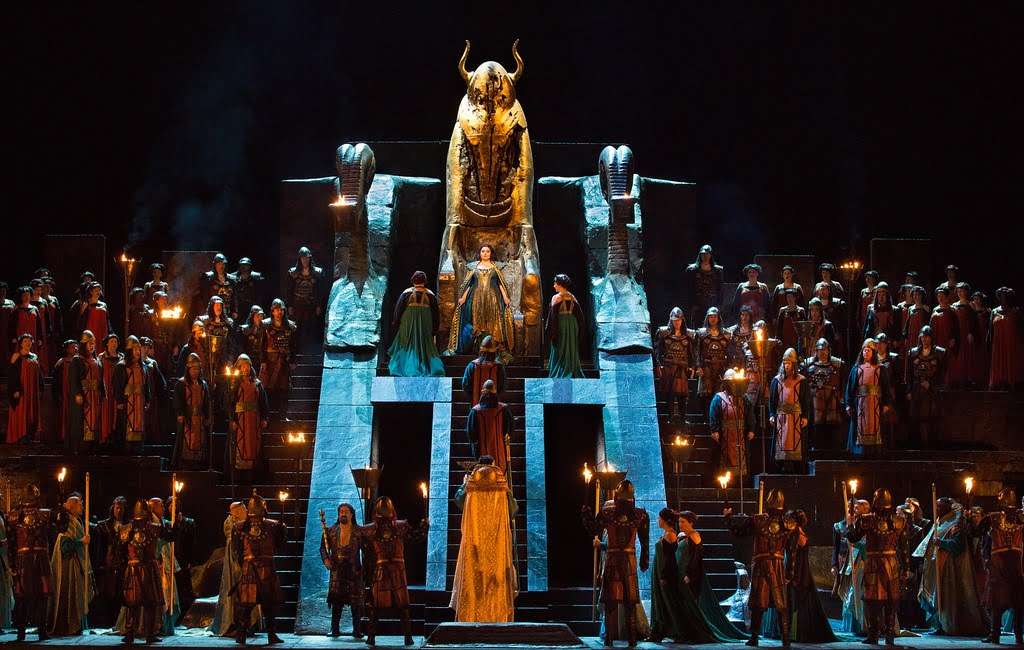 Who wrote it?
Nabucco was Giuseppe Verdi’s third opera and his first major international success, the stage-work that established him at the forefront of Italy’s cohort of composers. It was premiered in March 1842, and has remained popular, although sopranos who can undertake the fiendishly demanding role of Abigaille successfully are relatively few.
Nabucco has some glorious set-pieces, and the chorus is as important a protagonist as the principal singers, representing the populaces engaged in a war regarding religious supremacy. The music is earthy, viscerally exciting and at times exceptionally dramatic.
The librettist, Temistocle Solera, based the text on the narrative of a ballet adaptation of a play entitled Nabuccodonosor (Nebuchadnezzar), a fantasy based on various passages from biblical and Jewish scripture; in particular the Book of Jeremiah, the Book of Kings, The Book of Daniel and the Psalms.

What’s it all about?
The opera is set around 586 BC, when Nebuchadnezzar destroyed the first temple of Jerusalem. Indeed, the Temple of Solomon is the setting of the first Act. Here we meet the Israelites at prayer as Nabucco’s army advances towards them. Their High Priest, Zaccharia, rallies them to trust in their God for salvation. They have a hostage in Nabucco’s daughter, Fenena, who is entrusted to the protection of Ismaele. 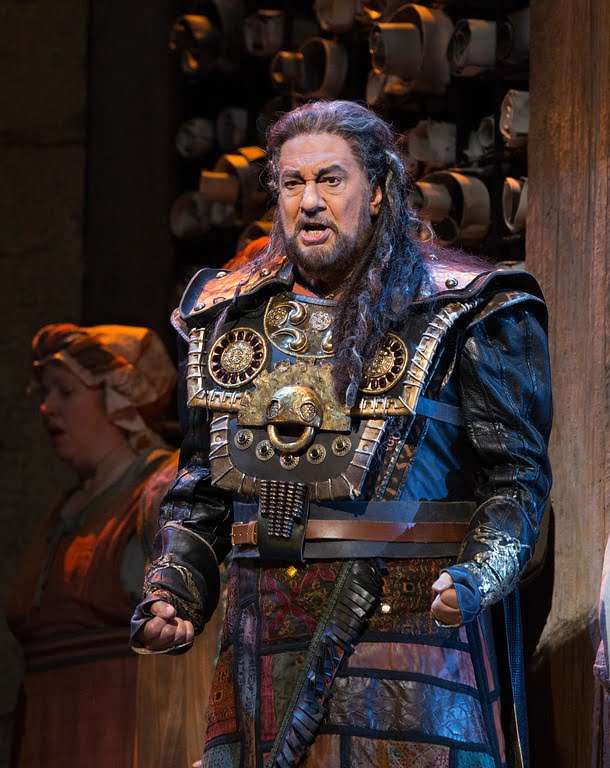 As the crowd disappears it becomes clear that Fenena and Ismaele are lovers. They had met when Fenena helped him escape Nabucco’s captivity. They are interrupted by Abigaille, who has been brought up as Fenena’s elder sister and who knows how Ismaele gained his freedom. She threatens to denounce Fenena to Nabucco unless Ismaele returns her own amorous advances. If he agrees she will also plead for the Israelites. Torn between love for Fenena and the safety of his people Ismaele procrastinates. Nabucco and his military entourage arrive. Zaccharia threatens to kill Fenena, but Ismaele intervenes. Nabucco orders the destruction of the Temple as the Act closes.
Act Two is set in Nabucco’s palace in Babylon. Abigaille has discovered she is illegitimate and has no claim to Nabucco’s throne, but determines to seize it and supplant both him and Fenena. In this, she is assisted by the High Priest of Baal, who advises her that Fenena has freed the Israelites captured during Nabucco’s advance, but also that the King has reportedly been killed in battle.
Meanwhile the Israelites turn on Ismaele for his perceived treachery, until it becomes transparent that Fenena has converted to Judaism and is a true ally of the faith. Abigaille enters and tries to seize the crown, but Nabucco suddenly enters. He claims his crown, supremacy over Babylon and Israel, condemns Fenena and all Israelites to death, and announces his status as a God. The heavens thunder and Nabucco loses his reason as Abigaille takes the crown and throne.
Acting as Queen, Abigaille tricks the deranged Nabucco into signing Fenena’s execution warrant. Realising what he has done he seeks the proof of Abigaille’s illegitimacy, only to witness her destruction of these incriminatory papers. Nabucco is reduced to praying for his true daughter’s life. The Israelites pray to their Lord for salvation whilst awaiting their fate. Nabucco, fearing the imminent execution of his daughter offers a prayer to God, promising to rebuild the Temple and to convert to Judaism if Fenena is saved. His sanity and strength are immediately restored and he rouses his forces to battle.
The final scene, set in the Hanging Gardens of Babylon, sees Nabucco successfully intervene to save the day and destroy the false idols of Baal. Abigaille, defeated, takes poison and dies imploring the mercy of God and the forgiveness of Fenena. 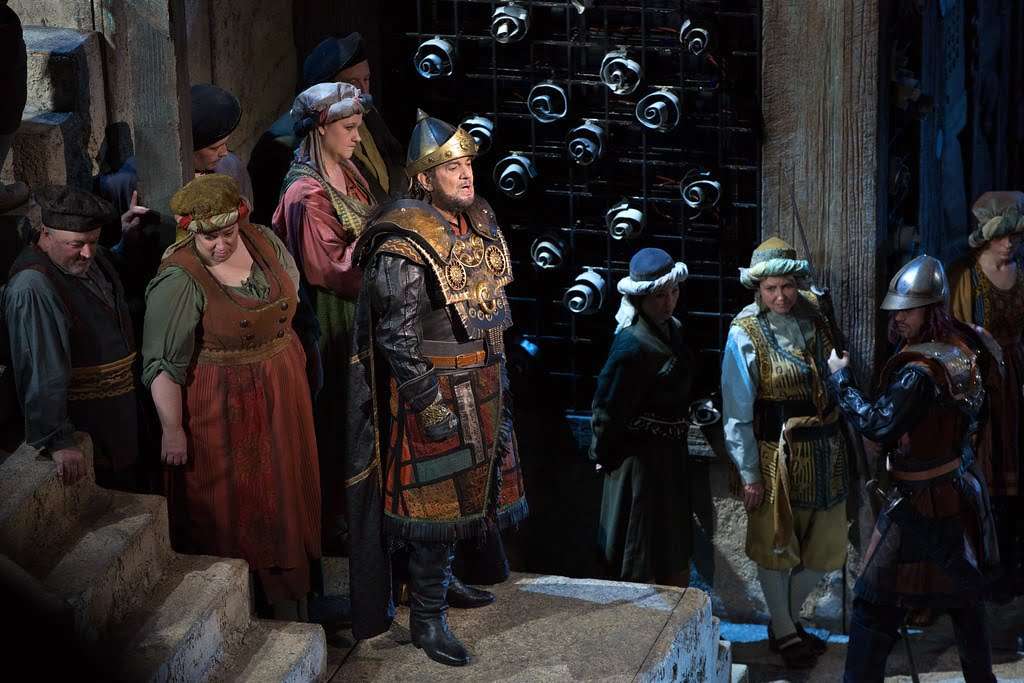 Look out for…
The Overture is something of a potpourri, including the most celebrated number of the opera, ‘Va pensiero’, often called “Chorus of the Hebrew Slaves”. Each of the principal characters has moments in the spotlight. Nabucco has important scenes in the latter Acts. Abigaille is a treacherous role – the singer needs a voice of dramatic bite, fearsome agility and staying power! Zaccharia requires a sonorous bass capable of sustained phrasing and also robust singing. The roles of Ismaele and Fenena are smaller but crucial – and their singers must contribute to some tricky ensemble.

Who’s in it?
The cast assembled by Metropolitan Opera includes Plácido Domingo, in baritone guise, in the title role and James Levine conducts the Orchestra he has nurtured over forty years. As Abigaille is Liudmyla Monastyrska, a role she has made her own. Jamie Barton sings the tricky and important role of Fenena, and Russell Thomas Ismaele. The impressive bass, Dmitry Belosselskiy undertakes Zaccharia. The production is by Elijah Moshinsky, renowned for his cogent Verdi production.

When’s it on?
If you are in New York City then the matinee is live at the Met itself. Otherwise it is broadcast to cinemas on Saturday January 7.