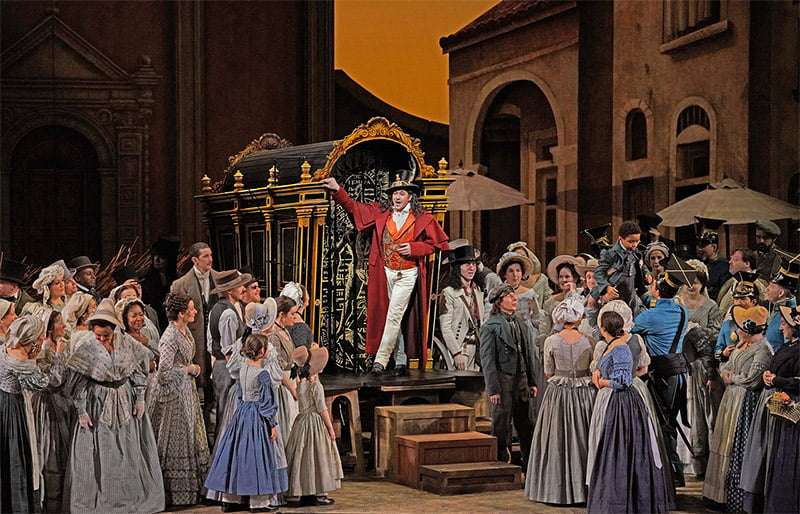 Who wrote it?
L’elisir d’amore is described as a Melodramma giocoso, although many productions play more to the comic side than the melodramatic one. The opera was premiered in Milan in 1832; it was the most popular of Donizetti’s stage-works in his lifetime and remains enduring and endearing. The libretto by Felice Romani is largely derived from Eugene Scribe’s text for Auber’s Le philtre, itself in based on Silvia Malaperta’s Il filtro.

What’s it about?
The setting is a rural village in northern Italy. Nemorino, a peasant, is hopelessly in love with Adina, a wealthy landowner. She is changeable and likes to be the centre of attention. She is reading the story of Tristan and Isolde to the local populace, Nemorino included, and remarks on the absurdity of the love potion.
Sergeant Belcore arrives with the local platoon, seeking new recruits. Full of swagger and self-importance he sees Adina and makes a play for her – how could she resist him? Her reaction infuriates Nemorino, triggering him to pluck up courage to speak to Adina and to declare his love for her. She puts him off by saying she is fickle and he should go and care for his dying uncle.
The next arrival in the village is Dr Dulcamara. He has many ‘medical’ wares to sell. Quietly Nemorino asks Dulcamara if he sells Isolde’s love potion. Dulcamara sells him a cheap bottle of Bordeaux for all the money he has. It will take twenty-four hours to act (by which time Dulcamara intends to be long gone).
When Adina reappears she is surprised to find Nemorino so cheerful and nonchalant. She declares she will marry Belcore, but this provokes laughter from Nemorino who is convinced the potion will work. News arrives that Belcore has received new orders and must leave. Adina announces she will marry Belcore that evening causing Nemorino to panic and he rushes off to seek Dulcamara for a further bottle.
Alas, he cannot afford the price and enlists in Belcore’s troop to get the advance payment; Belcore thinks he has successfully got rid of his rival for Adina’s hand. Nemorino drinks his new bottle of elixir, and every girl in the village is attracted to him. In fact, news has emerged that Nemorino’s uncle has died and left him a fortune! Adina is puzzled to find Nemorino surrounded by admirers and feels isolated.
Dulcamara offers the elixir to Adina, but she refuses. Alone, Nemorino sings of his undying love for Adina. She has bought his freedom and reciprocates his love. Belcore takes his loss bravely, and Dulcamara takes his leave, promoting his elixir as the reason for the uniting of the couple. 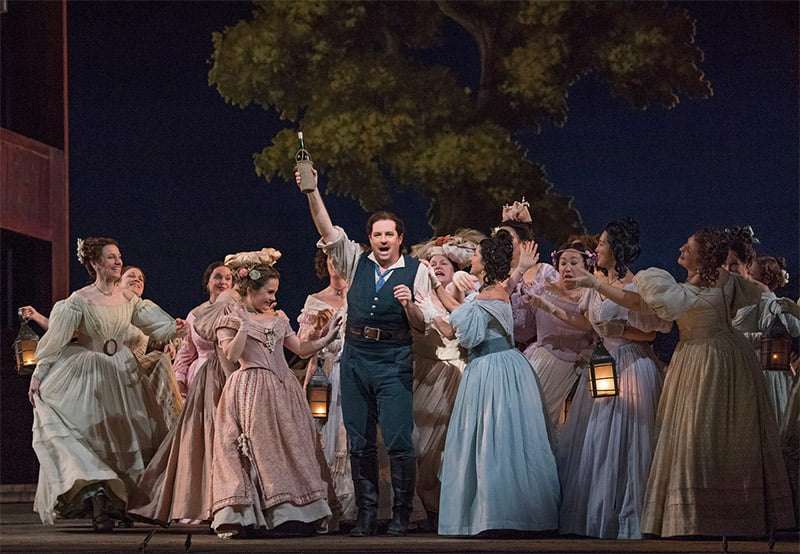 Look out for…
This opera abounds in glorious melody and vivacity – music for a capricious soprano, a romantic tenor, a baritone with machismo and swagger and a bass-baritone buffo role. All have moments in the spotlight. What raises L’elisir d’amore above the routine is Donizetti’s deft way of propelling the story along though clever recitative, and also the genuine pathos and drama to the story. Nemorino’s ‘Adina, credimi’, with its major-minor-key uncertainty, can stop the show, and at this moment the other characters also sing of their true feelings. Nemorino also gets to sing the meltingly lovely ‘Una furtiva lagrima’ – one of the great tenor arias. Dulcamara’s ‘Udite, udite, o rustici’ is a classic buffo aria with a patter-song finish.

Who’s in it?
Metropolitan Opera has assembled a great cast. Matthew Polenzani sings Nemorino, which will suite him well, and as Adina we have Pretty Yende, this role something of a calling-card for her. Having a native Italian for Dulcamara is vitally important, here the charismatic Ildebrando d’Archangelo who should fit the bill perfectly. Completing the principal quartet is Davide Luciano, emerging as a considerable talent. The staging is a revival of Bartlett Sher’s popular production and the performance is conducted Domingo Hindovan, an ‘El Sistema’ protégée.

When’s it on?
If you are in New York City then the matinee is live at the Met itself. Otherwise it is broadcast to cinemas on Saturday February 10.