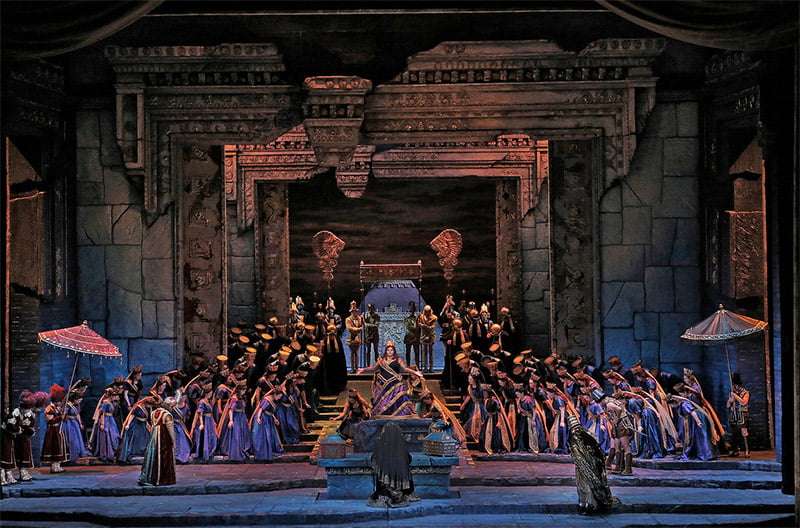 Who wrote it?
Semiramide was Rossini’s last great Italian-language opera, premiered in 1823 and successful in Italy and further afield. The librettist is Gaetano Rossi, but the action is based largely on Voltaire’s tragedy Semiramis. Its demands are immense and enjoyed star-quality of singers – the title-role was initially sung by Isabella Colbran who had married Rossini the year before the premiere.
It first reached the USA (New York) in 1825. However, its fortunes faded relatively quickly as Rossini’s style of composition began to fall out of favour, although the Overture is heard with relative frequency. Only in the post-war period did Semiramide begin to be staged again, not least with Joan Sutherland, Montserrat Caballé, Edita Gruberová and June Anderson, albeit usually in heavily cut editions. Semiramide is having something of a renaissance of late. 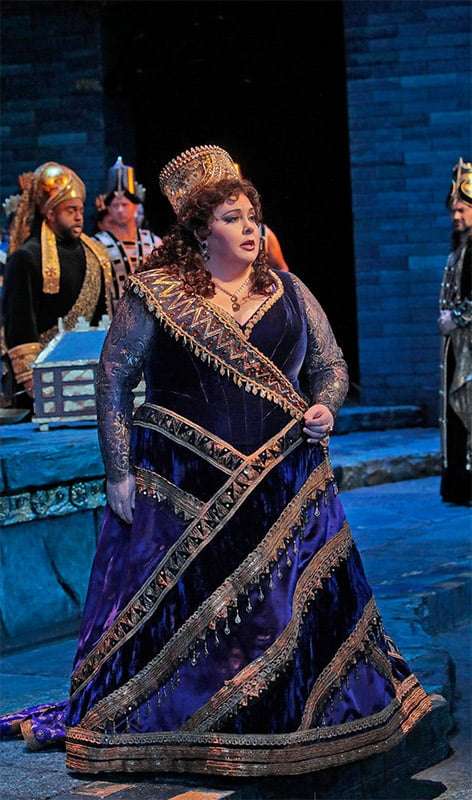 What’s it about?
The setting is ancient Babylon where King Nino has died in suspicious circumstances. Crowds gather in expectation as Semiramide, Nino’s widow, arrives to announce the successor in the Temple. Present are several contenders for the title including Princes Assur and Idreno. She attempts to delay the announcement but as she is due to make the declaration the sacred flame is extinguished. Fearing divine intervention and disaster everyone flees.
Arsace arrives in Babylon; he is coming to meet and hopefully marry his love, Princess Azema. Both Assur and Idreno are suitors for her hand too, although she is promised to the dead King’s lost son Ninia. Semiramide arrives in the Hanging Gardens; she and Arsace meet. He openly talks of love, and Semiramide, who secretly loves him, thinks she is the object of his affection.
When the populace and High Priest re-convene, Semiramide, having heard from an oracle that marriage will create the new king, makes the announcement but only once all have agreed to abide by the decision. The new King will be Arsace and he will be her husband. She also approves the nuptials of Idreno and Azema. However, as the High Priest Oroe starts to undertake the various ceremonies Nino’s tomb opens and his ghostly voice is heard. Arsace will be King but only once vengeance has been exacted for a terrible crime.

In the second Act we learn that Nino was killed by both Assur and Semiramide – she prepared the poison and he administered it. Assur believes he has claims to the throne but Semiramide is determined to marry Arsace. They argue and threaten each other – but both stand to lose much if their guilt is revealed.

Arsace is told by Oroe that he is, in fact, Ninia, and that Semiramide is therefore his mother. He also learns that Nino’s death was ordered by his mother. Oroe gives Arsace his father’s sword with which to avenge the death as the oracle dictates.

Although she still loves Arsace, Azema agrees to marry Idreno and he swears he will love her and make her love him truly.
Arsace confronts his mother with his new knowledge; she is shocked to learn his true identity and expects him to kill her. He states he would like to forgive her but must follow the demands of the gods and enter his father’s tomb to exact revenge. He believes his victim will be Assur. In the darkness of the tomb Assur does indeed await, intending to murder Arsace. However, when Arsace strikes at him he hits another target – Semiramide herself. She had come to pray at her murdered husband’s tomb for protection for her son. Arsace is aghast and threatens suicide. At Oroe’s insistence he starts, reluctantly, to take regal control. Assur is arrested. As Semiramide’s life fades away Oroe and the crowds acclaim their new King. 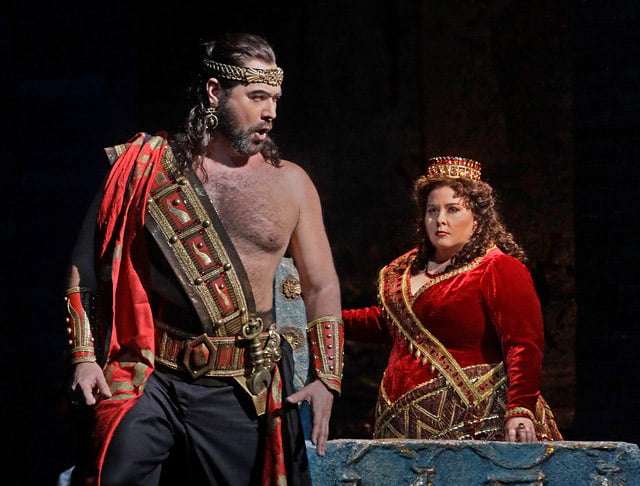 Look out for…
The Overture starts off quietly yet urgently and then the warm sound of a quartet of horns is heard. It gradually builds in excitement and pace, and provides some virtuoso moments – for the woodwind in particular! Semiramide’s second appearance gives her the aria ‘Bel raggio lusinghier’, which culminates in a dazzling display of vocal fireworks. Arsace, although a male character, is sung by a mezzo. The first duet between Semiramide and Arsace is classic bel canto and Arsace also gets some great solo scenes. Assur, sung by a bass, has several important duets with Semiramide. Whilst the role of Idreno is a bit of a cipher dramatically he does get one fiendishly difficult aria where he aims to dazzle Azema (and us!) with his ardour. The Finales of both Acts, particularly the first when the characters all respond to the proclamations of Nino’s ghost, are examples of Rossini at his dramatic and musical best.

Who’s in it?
The Met’s staging is a revival and the cast is a youthful one. The title role is sung by the hugely talented Angela Meade. Arsace is Elizabeth DeShong, one of the outstanding Rossini mezzos – with her rich velvety voice and her enormous range she should meet all the demands of this long role. The villainous Assur is taken by the inky-voiced Ildar Abdrazakov and Idreno is Javier Camarena – both are stylish Rossini singers.

When’s it on?
If you are in New York City then the matinee is live at the Met itself. Otherwise it is broadcast to cinemas on Saturday March 10.