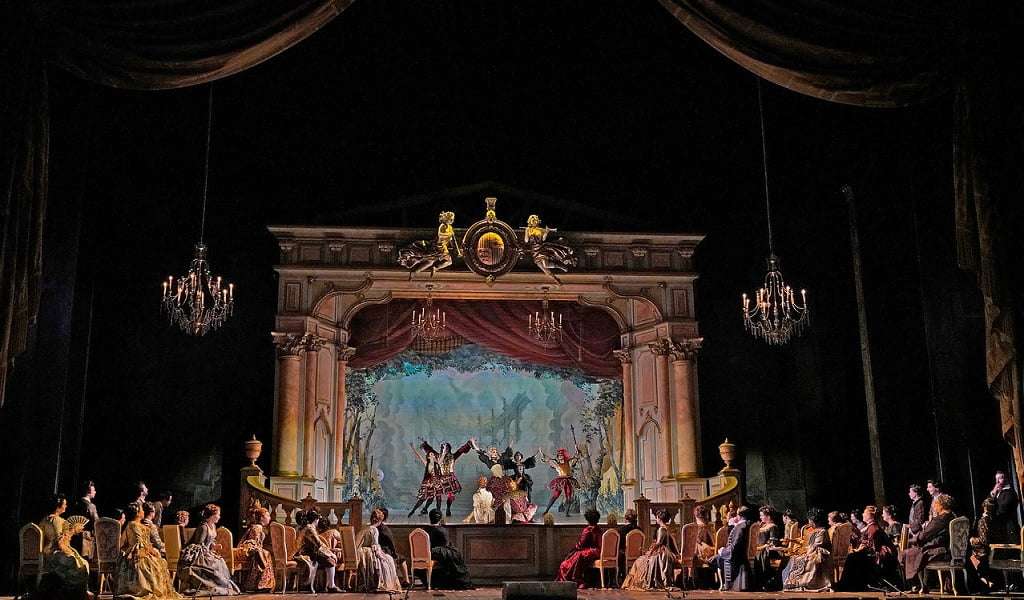 Who wrote it?
The composer of Adriana Lecouvreur is Francesco Cilea now best-known for this work, an example of the Verismo (reality) form of opera made most popular by Puccini, Leoncavallo and Mascagni. The libretto, penned by Arturo Colautti, is based on a play by Eugène Scribe (one of Verdi’s librettists) and Ernest Legouvé’s play Adrienne Lecouvreur, a fictionalised and romanticised telling of the amorous life and suspicious death of the French actress Adrienne Lecouvreur, a friend of Voltaire. She was known for her acquaintance with Maurice de Saxe, one of the illegitimate sons of August II the Strong.
Cilea’s opera has a classic and admittedly overblown plot involving romance, a love triangle, jealous princesses and actresses, backstage and court intrigue, deception and fatal poisoning. From a compositional perspective Cilea had an ability to turn a good tune, even if he ‘spins’ some of them a little too often, but some of the arias and scenes are frequently extracted.
The opera was premiered in November 1902 to enormous success (it probably helped that Enrico Caruso and Giuseppe De Luca were in the cast) and it travelled widely. As Verismo started to go out of fashion its fortunes waned, although it has remained popular in Italy and the USA. The title role has long attracted experienced soprano singer-actresses for the histrionic opportunities offered. 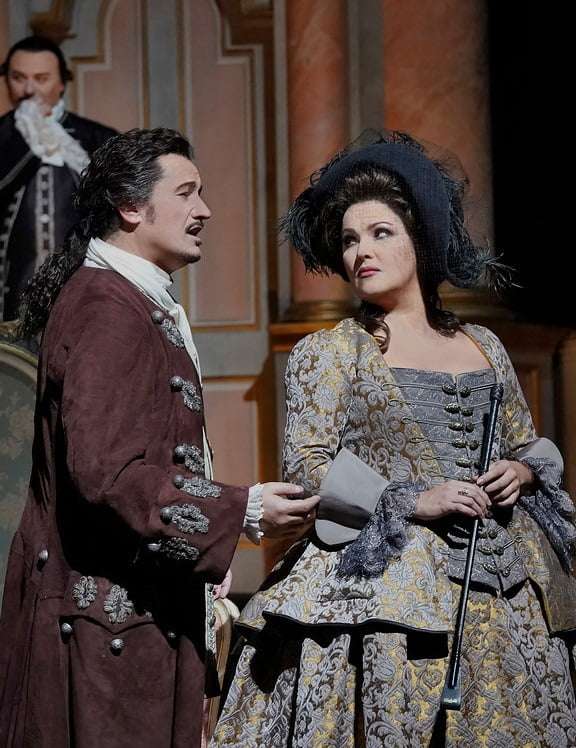 What’s it about?
The action is set in Paris in 1730 (around the time the real Adrienne Lecouvreur died). In the first Act we are backstage at the Comédie Française before a production of Corneille’s tragedy Bazajet in which Adriana and her rival Mlle Duclos are starring. The director Michonnet, in love with Adriana, is doing his best to chivvy his cast along whilst keeping the rival factions apart. Adriana admits to him, just as he is about to propose, that she loves an officer in the Count of Saxony’s retinue called Maurizio. When he appears he turns out to be the Count himself, although Adriana is unaware of this. They sing of their love and as Adriana leaves to perform she gives him a nosegay of flowers.
However, intrigue is not far away. Some of Mlle Duclos’s admirers, including her married lover the Prince of Bouillon, have intercepted a letter to Maurizio proposing a late-night tryst. They jealously plan to interrupt this assignation by hosting a party at the same venue and time. The letter is passed to Maurizio. He recognises the hand as that of the Princess of Bouillon, a former lover. He cancels his plans to spend time with Adriana to meet the Princess instead. Adriana is upset when she hears this, but when invited to the party agrees to go.
The Princess of meets Maurizio and on seeing the flowers suspects she has a rival, but Maurizio gives her the violets to calm her suspicions.
The Prince and colleagues appear as the Princess hides. They sneeringly congratulate Maurizio on his conquest (they think it is Mlle Duclos) and he plays along with their suspicions. Adriana arrives and Maurizio’s true identity is revealed to her. Alas, Michonnet then enters seeking Mlle Duclos. Adriana now also suspects Maurizio is faithless to her, especially when he says there is a woman in the adjoining room who cannot be seen for political reasons.
Maurizio begs Adriana to help her escape whilst the guests are dining. This Adriana does, although in the darkness the two women exchange a few words and become aware they are rivals in love, though they do not know each other’s identity. The Princess drops a bracelet which comes into Adriana’s possession.
In Act Three the Princess is holding a party at her palace at which Adriana is present. Her husband, an amateur chemist, boasts of developing a new poisonous powder which if inhaled induces delirium and death. Thinking she recognises Adriana’s voice the Princess tells Adriana that Maurizio has been wounded in a duel and the actress faints, only to rally when he enters. As the entertainments progress the Princess and Adriana joust verbally, and eventually the bracelet is produced confirming their rivalry. Adriana is invited to perform and chooses a passage from Racine’s Phèdre where the heroine denounces faithless women which she directs at her furious rival. The Princess swears revenge.
Back at the theatre Adriana is celebrating her birthday. A maid arrives with a boxed gift. When alone Adriana opens it to find the now-withered nosegay. Thinking she has been deserted she pours out her grief whilst holding and finally kissing the flowers. Maurizio arrives and offers his hand in marriage. Adriana responds ecstatically, but then her behavior becomes erratic and she collapses. The Princess has impregnated the flowers with her husband’s chemical… 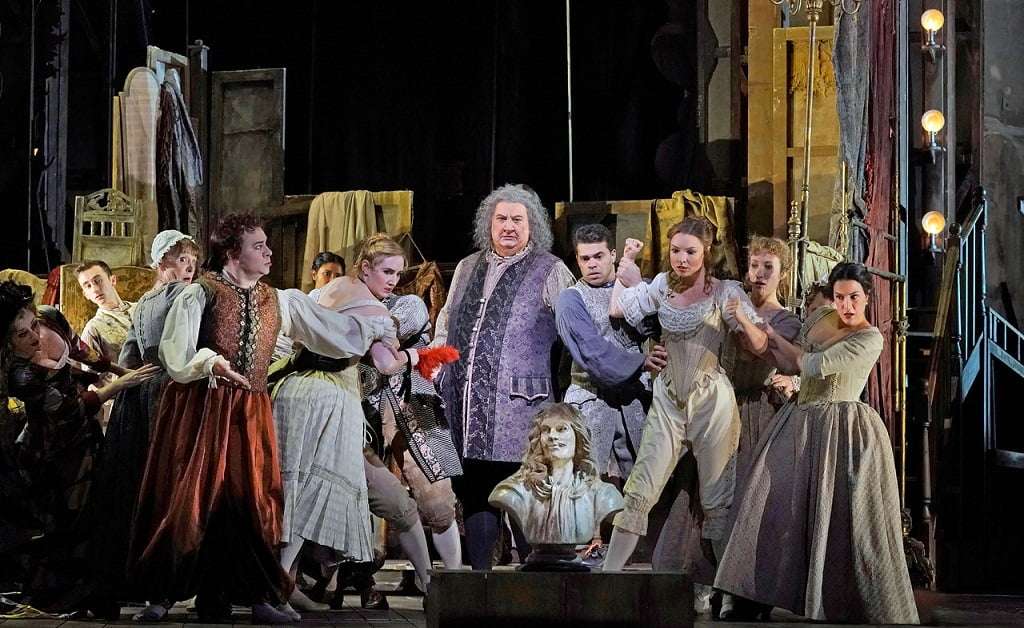 Look out for…
Adriana’s opening aria, with its long arching lines and a tune that becomes a musical signature for the character, is probably the most famous of the opera. The soprano must sing with great delicacy and poise. Her other great aria is in the final Act after she receives the bouquet of withered purple flowers. The singer taking on the role has to be good at theatrical speaking too for her Act Three recitation. Maurizio also has two famous arias, the second an account of his military achievements. The Princess’s first aria is at first dramatic and then opens out into a broad, luscious and beguiling melody. The two women get lots of moments for over-theatrical diva-rivalry.

Who’s in it?
The Met staging is by Sir David McVicar and is cast to the hilt with Anna Netrebko in the title role and Piotr Beczala singing Maurizio. Anita Rachvelishvili is the jealous Princess; her lush voice should sound fantastic in this barnstormer of a part. Ambrogio Maestri is the faithful stage-manager Michonnet. Gianandrea Noseda conducts.

When’s it on?
If you are in New York City then the matinee is live at the Met itself. Otherwise it is broadcast to cinemas on January 12.