On 29 May 2009, in a room high in the Royal Festival Hall, London, the good folk of Music Preserved and their guests raised a glass to the official launch of a cornucopia of ‘historic’ recordings, now available to all, worldwide… 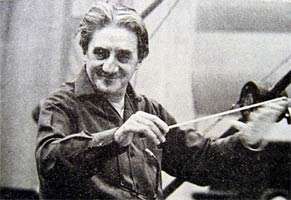 Into downloading? Interested in ‘old’ recordings (a link with the past)? Enjoy the thrill of a live performance? Know of ones from yesteryear that you would love to have heard? Let’s ‘present- and future-tense’ that … for you now may be able to do so.

The launch of ten recordings – with more to come … a shed-load more, seemingly – are now available. A brief mention follows.

For those with a bent on orchestras and conductors, standing out is John Barbirolli conducting Vaughan Williams’s Fourth Symphony (BBC Symphony Orchestra, 1950), a strikingly deliberate and weighty account, so different to the composer’s whiplash commercial recording, and immediately establishing itself as a must-have version of this great work. Coupled with it – although you can presumably download just the work you want (or even a movement), as well as a written note on the music and details of the performance (available free of charge) – is Barbirolli leading the first performance of Arthur Butterworth’s Symphony No.1 (Hallé, 1957), a ‘Cheltenham Symphony’ to be sure, but an intense and striving one, vividly communicative.

Or you may find Jon Vickers as Handel’s Samson irresistible (Raymond Leppard conducting the Royal Opera company in 1958) with Joan Carlyle as Dalila and – a mention with the advantage of hindsight – Joan Sutherland as an Israelite Woman! Or Carlo Maria Giulini conducting Verdi’s Attila in 1951 at Teatro La Fenice, Venice. Pride of place may well go to the first night of Britten’s Gloriana (9 June 1953, Covent Garden), conducted by John Pritchard, with Peter Pears, Joan Cross and Geraint Evans. 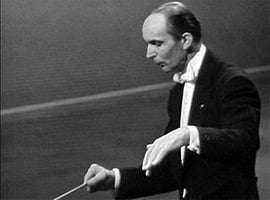 Should your operatic tastes be more Slavonic (and not adverse to Russian and Czech librettos being sung in English translation), then Rimsky-Korsakov’s The Golden Cockerel, conducted by Igor Markevitch (1954, Covent Garden, the cast including Geraint Evans and Hughes Cuenod), and Janáček’s Jenůfa under Rafael Kubelík(1951, BBC) with Gré Brouwenstijn in the title role. Opera on a more intimate level includes John Blow’s Venus and Adonis, edited by Imogen Holst, and her father’s Savitri; singers include Heather Harper, Thomas Helmsley and Peter Pears, Charles Mackerras conducting both pieces at the 1956 Aldeburgh Festival.

Vocal riches continue with the artistry of tenor Richard Lewis in Tippett (Boyhood’s End and The Heart’s Assurance) and Janáček (an in-English version of Diary of One who Disappeared; and finally – for the moment – ‘the Britten connection’ – his String Quartet No.2 played by the Amadeus Quartet and the composer joining the string-players (three of them) for Mozart’s Piano Quartet in E flat (K493) in performances from 1951 and 1953. Oh, and there’s some Walton, too, his Cello Concerto with Piatigorsky, and Façade – all a bit mysterious, at the time of writing, as to who the performers are!

The archive material has been donated by enthusiasts, who recorded broadcasts on acetates and magnetic tape, one such being Lord Harewood; the sound quality of the sources is understandably somewhat limited and variable … but it has been expertly re-mastered by Roger Beardsley and really shouldn’t be a barrier to appreciation and illumination.

Performances of the past (Music Preserved) delivered to a computer near you by the technology of the future (TheClassicalShop).