For three weeks every summer, Silicon Valley, the birthplace of such high-tech companies as Hewlett-Packard, Apple and Google, is abuzz with the making, teaching, coaching and discussing of chamber music. 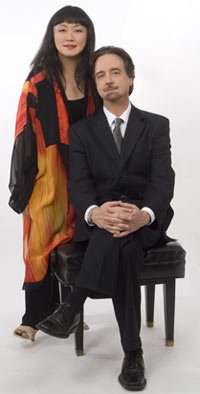 The Music@Menlo Festival and Institute, whose name hints at the blending of arts in a high-tech locale, is now eight seasons old. Its indefatigable artistic directors, cellist David Finckel and pianist Wu Han, are veteran leaders who have headed up another West Coast music festival, the prestigious La Jolla Summerfest, and are currently artistic directors of the venerable Chamber Music Society of Lincoln Center in New York City. Additionally, having been disappointed with the way the commercial recording labels operate, they run their own record label, ArtistLed.

Finckel and Han saw a void of chamber music in this part of California in the summer, and they were determined to fill it. This year’s festival theme, Maps and Legends, gave the directors free rein to musically trot across the globe and through the ages. For three weeks this summer, they’ll spotlight distinct musical cultures through concerts, lecture-demonstrations, masterclasses and more. Seven thematic chamber music programs, including The English Voice, La Ville-Lumiere Paris and Dvořák’s America, are programmed to show how the music of that time and place defines the experience then and there.

Concurrently with the festival, Music@Menlo also holds an institute for budding young musicians and those on the cusp of their professional career: three weeks of lessons, masterclasses, workshops and performances.

I spoke with Finckel and Han during last summer’s festival, with the strains of the Pacifica Quartet warming up in the background before a concert.

WU HAN: The ideas practically came in hand in hand. Having a chamber music festival was our first goal. But as soon as the musicians were assembled, we thought, my God, these are the most kind, generous musicians, the most intelligent and curious bunch. How could we not have the next generation right next to them? We decided that within seconds.

DAVID FINCKEL: This whole festival is meant to be a learning process for everyone involved. It’s the joy of learning that propels this, from us, to the students, to the audience, to the staff, to the donors. The presence of the students at every event is the way of reminding our audience and the musicians that that’s why we’re here. It’s not just to teach them, it’s to learn ourselves. There’s no real difference between us, it’s not like we’re the senior musicians on the world-stage and the students are learning from us. People have so much to offer and so much to share. Nobody is here to simply be entertained, we’re all to learn, be stimulated, be fascinated, and to grow. It doesn’t matter whether it’s the most senior musicians or the young students.

WH: Or the audience.

GW: That was my next question – I’ve noticed the most remarkable things about your audience. And one of the most remarkable is that it’s full of groupies. I saw them line up an hour before the concert, and so many have been coming every year. They would hate to miss a concert, and I see a lot of familiar faces even after just a few evenings. So, what is it about Music@Menlo that gets people to be so excited about the performances and to be so loyal to you?

WH: The thing is that spirit, that we described. People here have an open mind, and a very intense passion. There’s a very communal type of activity that once you’re involved, it’s very hard to ignore it. You see it from everybody, especially from the kids, that joy of music-making. We’re not lecturing people; it’s not a lecture, it’s just fun to know. And then, once you know, once you learn, the music does its own magic. You create a temple of the respect and you create the most fertile ground for music to flourish so the music has a chance to communicate. The concert halls are quiet, people feel welcome. This is the area where they know they can enjoy this art form.

GW: There’s something else about your audience I noticed from the very first night. I didn’t hear a thing, not a cough, not a candy-wrapper, and certainly not a cell-phone. It was the most quiet I’d ever heard an audience.

DF: We work very hard to preserve the sanctity of the listening space, for the benefit of the listener. They’re not always sitting on the most comfortable seat, the temperature not always perfect, but those things are not that important. What is important is the zone of concentration and curiosity. And that’s the thing we create here, and I like to think that people have taken to it because that’s something very rare for them to find in their lives: A couple hours of unbroken, uninterrupted absorption in something much greater than popular culture. This is great stuff that we’re performing for them here. It’s well worth their time and attention, because it’s going to take them to a better place in their heads than many of us have the opportunity to be in.

WH: Everything we do is in the service of the art form. When we look at the program, we think who would be the one who can bring the most out of this repertoire, who can be the one to demonstrate and love this music the most. There’s no ego or agenda involved except that.

GW: What’s next for Music@Meno? Will you be growing the festival in terms of the number of students, or faculty, or number of days?

DF: We can’t really grow too much. Growth in size or number does not always coincide with an increasing quality. The quality is our major concern here. But, you never know, we don’t like to be predictable. If we thought it would be better quality if we made it smaller, we might even do that.
What we promise to our audience is that it’s always going to be the best that we can possibly make it, no matter the size. For the amount of information that travels between the public and the faculty and musicians in these festivals, three weeks seems to be a pretty good amount of time. I don’t know whether people could absorb another week, because this festival is incredibly rich in content. Right now it seems to have evolved to a place where it feels manageable, we want it to seem right, we want it to be digestible, to be able to be absorbed and we want people to be just as hungry for next year as they were for this.