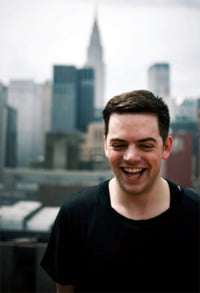 Nico Muhly is in London for the world premiere of his first opera, Two Boys, commissioned by the Metropolitan Opera but brought to English National Opera for its first production. Muhly comes to opera on the back of a composing career that brings together a love of choral music and pop music, and he has written naturally in both fields. This would seem to make him the ideal candidate for an opera about the Internet, on which he is an active presence – either through regular blogs on his website or posts to Twitter. On both he has talked about the stresses and strains, as well as the pleasures, of the build up to the opera’s staging. So when he first heard the story that fuelled the opera, was it an easy decision to take it forward?

“I first heard about the story many years ago, probably in 2002, and it was something that stuck in my head, not as an opera but as a kind of idea, something to think about. It is a very complicated but a beautiful story, a horrible story and a tragic story – for me the best kind of story. There are things that stick with you, especially those things you read in the news, that you don’t know what you’re going to do with necessarily, but it’s something that stays with you. When the Metropolitan Opera approached me about writing an opera they asked that same day if I had any ideas, and I blubbered out this, and they said ‘Good!’”. He laughs. “That was how it happened, and from there it was about me and Craig Lucas, the librettist, putting it together. We very quickly abandoned the idea of going with the whole story exactly as it happened. It is based on a real thing that happened, but reality, as is so often the way, is fifty times more complicated than what you could achieve on the stage. We had to centralise a few things, and we invented the inspector, who is our heroine, and who sees the whole thing unfold.”

With much of the story cast on the internet, was it difficult to transfer this to the stage dramatically? “Not at all”, Muhly responds emphatically. “Opera is something that has been doing virtual reality for centuries. If you think of an opera such as Partenope, that is a political and romantic opera but is based on people not being in their own identity. It is the same sort of thing with Così fan tutte. A lot of operas have as the major point of their plot someone who is not what they say they are. The fact that happens on the internet is virtually incidental to this plot.” When asked what his expectations were from writing an opera, he laughs instinctively. “You asked that as if it was something like going into the office! I think the first step is getting the libretto correct, and that was one of the great things about Craig, that he was a very energetic collaborator. When we were both working on it there were hundreds of e-mails a day, for a period of about a year, going back and forth. What I learned about myself as a composer in setting the text, was that if the text is right, it falls right into place. So I didn’t really have any expectations until I got the text, and then I started writing and it was really easy, and fun, and joyful, and great! It definitely felt like hard labour, but because we had the video people involved as well it felt like I was in the minds of friends, a little Disneyfied, perhaps.”

Muhly studied with Christopher Rouse and John Corigliano at the Juilliard School, and he is quick to credit the influence of the former composer. “In the last ten minutes of Two Boys there is a really Rouse-ian thing that I’ve done with the percussion, it’s very funny. It’s like a ratchet, tenor drum and bass drum in a 3/8 bar, and then a gong – it’s so just taken from Gorgon.” He enthuses further about one of his teacher’s biggest orchestral works. “Isn’t it the best? I got into his music when I was about fifteen, which is a great time to be listening to Christopher Rouse. I think he’s so cool. He reminded me in his misanthropic ways of a fake grouch who spends his entire day thinking about being Mickey Mouse! In the same way with Rouse it’s really dark music but it’s as if it’s in Disneyland. He actually used to go to Disneyland to write his music. So when he writes those terrifying symphonies that is where he was! His music is descriptive without being narrative.”


Muhly’s musical background is vocal – more specifically, choral. “I think it is the only thing that has helped me as a composer. Having a choral background is the only reason I’m a musician at all. That for me is the main emotional cauldron of my writing. There is definitely a huge debt just emotionally and structurally to Tallis, in the way that the choral music works in Two Boys, but it’s really hard to describe without seeing it.” Muhly has worked as an arranger and conductor with Björk and Antony and the Johnsons, and collaborated with the Brooklyn group Grizzly Bear for a number of orchestral concerts in 2009. He therefore sits at a kind of junction between classical and pop music, but is careful to note a few caveats. “The appeal is very different to the intent, and I think that’s a very important distinction to draw. The appeal and the press surrounding the appeal are different from the notes and the rhythms, so the differences are not being in control of how the people perceive them. I would say I am writing the most natural music that I know how to write, as a 29-year old.”


He qualifies this further. “The idea of appeal or not appeal is secondary to the philosophy of the music that I’m making, which comes back to writing church music. There is popular and non-popular church music, but there is participation in a very large liturgical system in which music is used, but it has a structural place in the context of worship, and no-one is clapping at the end of it. It can be virtuosic or amazing, or not, or incredibly touching – something like ‘If Ye Love Me’ or a Bach motet, or it can be complicated with moving parts, or it can be like Kenneth Leighton or Herbert Howells, which is also music that I love, but it all locks in to this bigger, curated project.”

Muhly has received the backing of Decca, who have recorded a selection of his music. “What I like about Decca is that it is an ensemble-driven project. For Seeing Is Believing I’m kind of the engine behind the project. The Aurora Orchestra wanted to make something and that was the driving force. With something like the work I’m doing with Bedroom Community (a record label of which he is co-owner) that feels more like me making the directions. It’s good to have both those facets accounted for.” As we speak time is ebbing away before the Two Boys premiere, but while Muhly is clearly aware of what needs to be done there is a form of calm when he says, “there’s a ton of work to do! What I’m really looking forward to though is the second show. The premiere’s going to be wholly stressful. I need to be as supportive as I can to the singers, the orchestra and the designer. We’re having four-way conversations between what’s onstage, what’s in the pit, what’s been projected and what’s physical.”

Is each day emotional with so much of his work on show? “No. I have a way of displacing that energy. I think I’ve already processed that in the writing. I get more emotional about clerical errors. In the arts, the things that drive people insane are not artistic things, they’re administration things. For me that becomes very emotional. Artistically it’s been really a very natural collaboration, a very score-based but not rigid production. My intention is that the score is subservient to the drama, and the drama controls the director, once I’ve written the score that tells him what to do.”