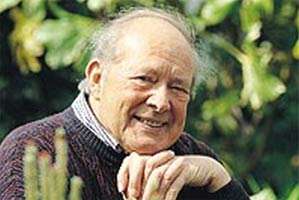 The Welsh composer Alun Hoddinott died on March 12th in hospital in Swansea
at the age of 78 after an illness of several months. Born in Bargoed,
Glamorgan in August 1929, his death brought to an end the extraordinarily
prolific life of one of the most gifted British composers of the twentieth
century, certainly the most significant composer Wales has ever produced.


His opus numbers amount to 200, but even then, within them, there are many
individual numbers which include more than one composition ­ for example,
his Op. 72 comprises no fewer than five separate orchestral works (all
relatively short pieces, written at various times for youth orchestras) – and there are many more additional works which bear no opus number.

On
looking through Stewart Craggs’s latest edition of his Source Book on the
composer, published last October by Ashgate, a listing including pieces
written up to 2005, it appears Hoddinott’s total output reaches around 300
separate compositions. That Hoddinott was a prolific composer there can be
no doubt; and as with many such composers there are occasions wherein his
creativity burns at a lower level than on others. Hoddinott knew this
himself, but was occasionally too dismissive of some of his own music: ‘I
don’t think that’s a very hot piece’, he said to me after I told him of my
admiration for his Second Piano Concerto; in response, I pointed out to him
the qualities I heard in it which he, as its composer, had either overlooked
or forgotten. He seemed unaware that he had produced a rare, understated and
reflective concerto, unique in British piano concertos, a work which
received a very fine recording by Martin Jones, originally issued by Decca
and recently reissued on Lyrita.

Mention of his recordings leads one to make
the point that he was, over the years, one of the most recorded composers of
his generation – certainly regarding numbers of works on disc. In 1994,
Hoddinott’s output had reached Op. 140, and commercially issued recordings
of his music up to then numbered around 75 separate works, several recorded
more than once. Since then, of course, his discography, along with his
output, continued to grow. If few contemporary composers have been as
fortunate as he was in getting their music onto disc, the result is that we,
as listeners, have had a remarkable opportunity to study his output at our
own pace.

Among the best of his recorded works are several of very high
quality: in particular, the Fifth and Sixth Symphonies, the First Violin
Sonata (one of the greatest ever written by a British composer), the First,
Second, Sixth and Eighth Piano Sonatas and the Second Cello Concerto, Noctis
Equi, written for and recorded by Rostropovich on Erato, which has recently
been reissued in a Warner Classics commemorative Rostropovich box. Hoddinott¹s First Cello Concerto, Nocturnes and Cadenzas, is also
available on Lyrita, played by Moray Welsh.

There are other excellent issues
on CD, including Martin Jones’s outstanding Nimbus set of the first ten (of
13) Piano Sonatas, but among the more recent fine works of Hoddinott which
one would like to see recorded are the Second and Third Cello Sonatas, the
Second Violin Concerto (Mistral), Dragon Fire – a concerto for percussion
and orchestra, and the stunning Euphonium Concerto. There is his lighter
music: the Investiture Dances – which recently received its third commercial
recording – plus the four sets of Welsh Dances and the Quodlibet on Welsh
Nursery Tunes – these are all brilliant orchestral works. Perhaps one would
most like to see a revival of one of his six operas. He wrote much chamber
music: five string quartets, six violin sonatas and three cello sonatas
among other works – clearly, here was a man of enormous energy, and, in the
1960s a fluent and perceptive writer on music as well, often for The Western
Mail, The Listener and Musical Times. Hoddinott was not only a prolific
composer but an administrator as well. He founded in 1967 – with John Ogdon – the Cardiff International Festival of 20th-Century Music and ran it for 20
years, during which time he was also Professor of Music at University
College, Cardiff, building the department into the largest of any British
university.

On being asked at the time of his fiftieth birthday why he chose
music, he replied, ‘You don¹t choose music; it chooses you.’ Few composers
have made such a powerful contribution to the music of their native land as
did Alun Hoddinott. His Welshness – perhaps more properly deriving from his
Celtic ethnicity, demonstrable throughout his mature life as a composer – can be found in many of his works, exemplified in their titles and his use
in his lighter music of Welsh folk-tunes. Although his music certainly
reached a wide audience, with almost 100 works commercially recorded, Wales
remained his home throughout his life. He was a big man in every sense of
the word, but at heart a kind, generous and gentle one, also.


As a musician,
he was enormously accomplished: speaking of his Violin Concerto No. 1, written in 1961 for Manoug Parikian, the composer said he designed the solo
part so that, in an emergency, he could play it himself, and apparently did
so at rehearsals with the violinist. As a young man, Hoddinott played both the violin and – especially – the viola publicly, and he gave several early
performances of Malcolm Arnold’s Viola Sonata; his practical experience in
music-making was of inestimable value in his compositional life. His piano
playing, also, was more than passable, although he said his hands at the
keyboard were ‘like pig’s feet’. Hoddinott was a more than competent
conductor of his own and other composers’ music – he gave a particularly
impressive performance of Beethoven’s First Symphony in Cardiff in the early 1980s – and successfully conducted the premières of several of his own major works. In his vocal music – including oratorios and the magnificent (unnumbered) choral symphony Sinfonia Fidei – he never neglected the global
perception of the Welsh singing voice and his contributions are as
significant as they are numerous, ranging from the Ninth Symphony for soprano – Dame Gwyneth Jones – and orchestra to simple unaccompanied
folk-song arrangements. Hoddinott also composed music for feature films,
including Sword of Sherwood Forest and the Walt Disney production The
Horsemasters, and saw the distinction of having an orchestral work enter the
UK pop album charts in the same month as Rostropovich¹s recording of Noctis
Equi was released. A rich life, indeed.