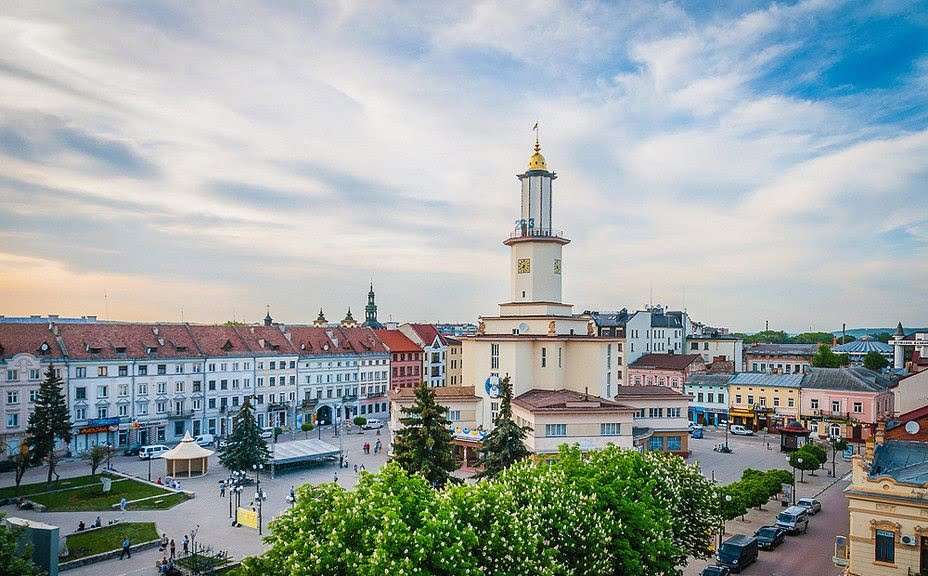 Subcarpathian Spring, which is actually a series of concerts organized by Ivano-Frankivsk Regional Philharmonic Society, is generally reckoned to be one of the outstanding music festivals in Ivano-Frankivsk, an historic city located in western Ukraine. Spring festival tradition is a very special period in the cultural life of the old city built on the walls of a mediaeval fortress in 1662. The ancient European inhabitants connected the breaking of spring with a new calendar sowing ritual cycle. Thus, the spring festival is always associated with the awakening of nature, beginning of the new agricultural year. It is obvious that such archaic traditions have got the deep mental resonance in musical culture of Subcarpathia (an historical and ethnographic region of Ukraine located on the Northern slope of the Carpathian mountains). National musical groups and musicians as well as foreign ones are invited to here, which is a unique phenomenon of the concert season at the Ivano-Frankivsk Philharmonic Society. As Volodymyr Fedorak, the head of the organizing committee, said before a concert: “The festival has got a long tradition. It was founded at the beginning of the 1950s, and annually, since that time, the festival has been held as a very important event for people who love culture and music”.

This year the festival of music is held in Ivano-Frankivsk and includes six concert days. About 400 musicians are generally taking part in the festival. Both local musical groups and guest performers from the other regions of Ukraine are among them. “This year we wanted to present music of different genres and, in our opinion, we succeeded, with performances of symphonic, folk, dance music as well as choral and vocal music”, said Ihor Demianets, the Art Director of Ivano-Frankivsk Regional Philharmonic Society. 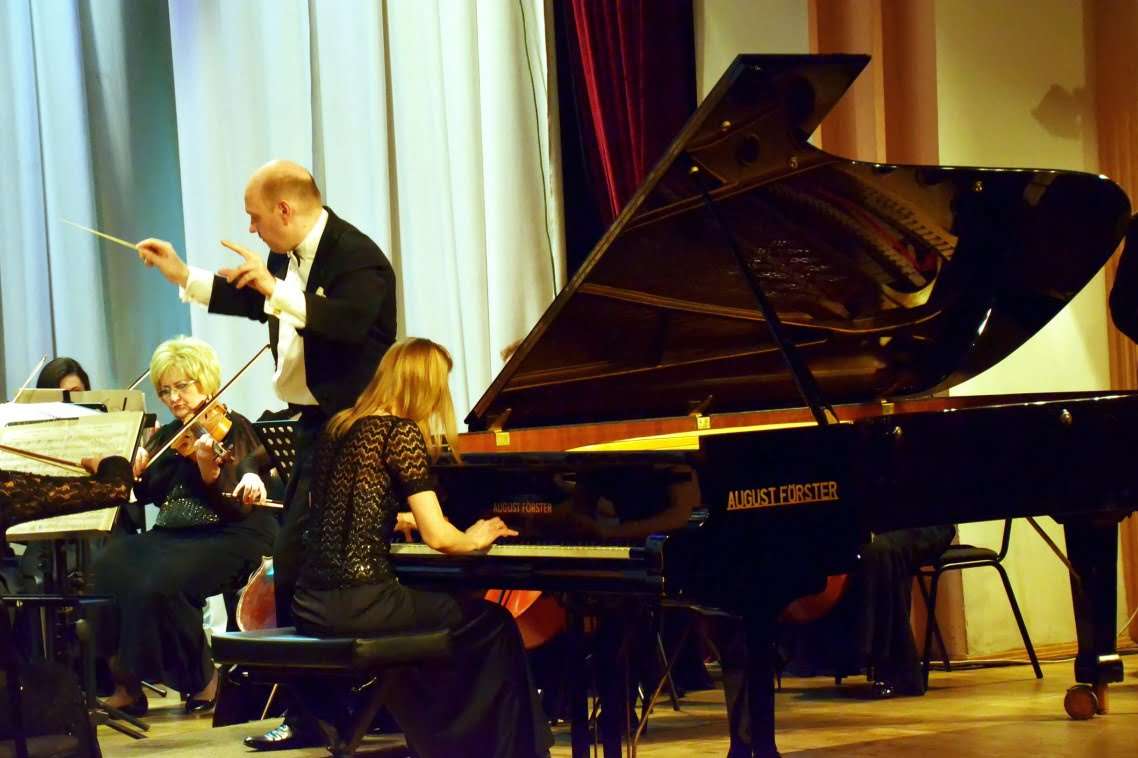 Symphonic Orchestra of Ivano-Frankivsk Philharmonic Society (Viktor Oliinyk is the Art Director and the Chief Conductor of the orchestra) and Dina Pysarenko, a young pianist from Kyiv, opened the first day of the Festival. Music by Ivan Karabyts (1945-2002, father of conductor Kirill Karabits), Tchaikovsky, Liszt and Rachmaninov were programmed.

Dina Pysarenko is a laureate of international competitions. She studied at Sergei Prokofiev Donetsk National Music Academy. Now she is a pianist in Ukho Ensemble Kiev, and is one of the brightest musicians of the young generation who is not afraid to experiment with varied styles and genres.

I spoke with her after the concert.

VS: Dina, is it your first trip to Ivano-Frankivsk? What are your impressions after a visit to the city?
DP: Actually, it is my first trip to Ivano-Frankivsk. Generally speaking, I love Western Ukraine, which is very calm and has many interesting pieces of architecture. I visited this region, Chernivtsi and Lviv, in particular, several times and always we were warmly accepted.
VS: Dina, the audience very warmly accepted your performance at the opening of the festival. Why did you decide to play the Overture to [the opera] Taras Bulba (1912, premiered 1924) by Mykola Lysenko (1842-1912) at the end of the concert? Is it your favorite Ukrainian opera or maybe are you inspired with heroic tone of the music or is it just a trick of fortune?
DP: There was a great gala concert in Donetsk Opera House two years ago when the whole Ukraine celebrated the 200th-anniversary of Taras Shevchenko’s birthday. I was asked to perform something festive. I came up with this Overture because I like it very much. Later, in a month, I was awarded with the Levko Revutskyi prize and I also played this piece of music in Kyiv. And why did I decide to perform it in Ivano-Frankivsk? I like performing music for the soul, what is familiar to us since childhood. I wanted to give joy to people by means of the music which is well known to everyone.
VS: You are well-experienced with many music festivals in Ukraine and abroad, such as: Kyiv Music Fest, Gogolfest, Heldern-Platz-Konzerte and others. Are there any differences between the audience at the Ukrainian and foreign festivals? Do listeners always perceive music in the same way, irrespective of the place where it is performed?
DP: The audience skill levels may often differ, of course. Our festivals are very young in comparison with those which are held in the western countries. As far as I know, the Warsaw Autumn Festival, for example, has been developed in Warsaw since 1955. The same goes for Germany where a lot of festivals take place. Festival life in Ukraine began since the Independence, though, certainly, there are several exceptions. Let’s take for instance Musical Premiers of the Season that has been held since 1988 or Kyiv Music Fest, since 1991. So, our active festival life began from that later time, but all our festivals are held at the very high level.
VS: I know that since 2015 you have joined Ukho Ensemble Kyiv. Could you tell a few words about the ensemble and your repertoire?
DP: The initiative to create the ensemble belongs to UHO Creative Agency. Luigi Gaggero, our conductor, is quite a multiple personality! He is a percussionist and he has studied in Hungary, Italy and Germany. He is leading the orchestra in Strasburg. He became acquainted with UHO Concert Agency which firstly invited him as a concert cymbalist to Kyiv. It was decided to create a new ensemble after that. There was a live-audition contest for each instrument and Luigi selected the best musicians. I had the honor to join this ensemble. Our ensemble performs many vanguard and postmodern compositions by either mature composers or young ones of post-World War Two. We have performed three concerts and now we are preparing the forth one. All the concerts were held in Dovzhenko National Center, in Kyiv. In the first program I played Messiaen’s Oiseaux exotiques. The second program was devoted to Pierre Boulez’s 90th birthday, and Ukrainian composers created three pieces of music dedicated to him.
VS: Do you have plans to travel more widely for performances?
DP: Yes, of course. For example, we are planning to go abroad, as far as I know, we’ll visit several foreign countries. But it is difficult to say now; the final decision has not been taken yet.
VS: At the end of our interview, Dina, what could you advise our young pianists who just begin their creative careers?
DP: I may give a lot of guidance but the most important is to do the things you like and believe in your lucky star. 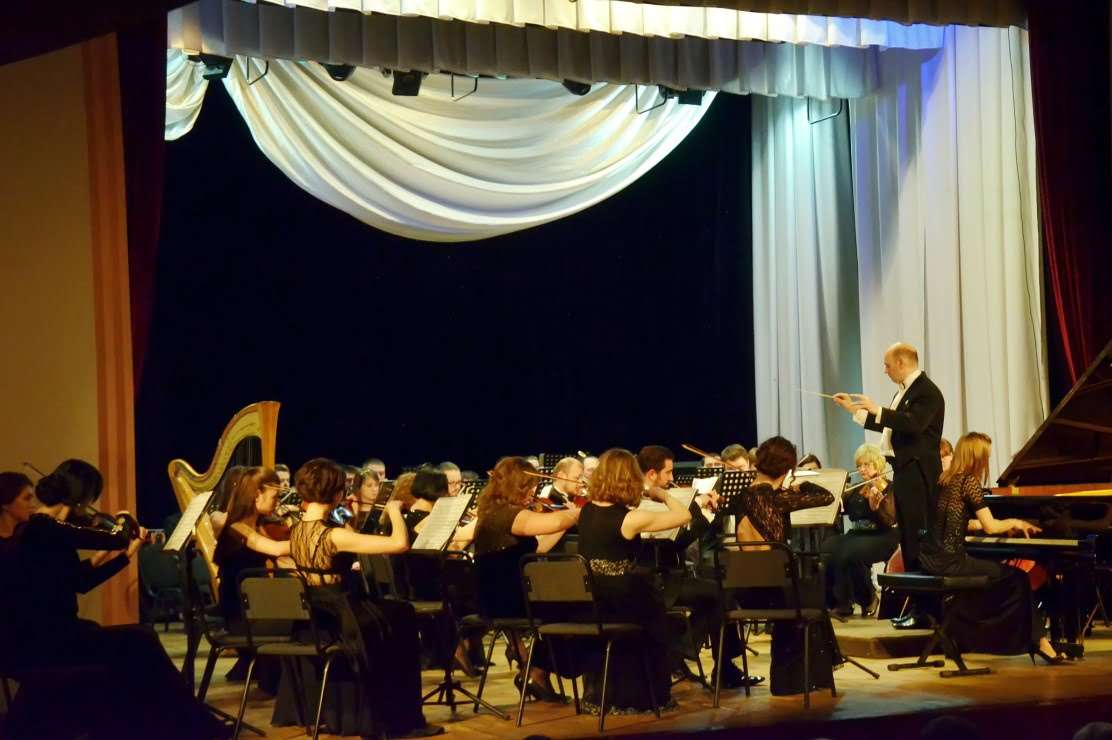 Subcarpathian Spring 2016 has become a special platform where all musicians both famous and very young may express themselves. One of the festival days is named “Subcarpathian primrose. Young virtuosos”, and is dedicated to such things. Vasyl Tymkiv, one of the organizers of the festival and director of Ivano-Frankivsk Regional Philharmonic Society, mentioned that “active attraction of the young musicians to the professional scene is considered to be an originality of the festival”. Not only the young instrumentalists with the Harmonia Nobile academic chamber orchestra and Philharmonic Society symphonic orchestra but also the young dancers at Vadim Pisarev Ballet School. Thus, the idea to synthesize the arts, both music and dance, will be closely intertwined and involving the young generation in collaboration with the professional musicians of the philharmonic scene.