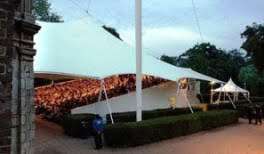 This year’s opera season in Holland Park fields not only a bold programme but also a new home and a new sponsor. Formed in 1996 Opera Holland Park has gone from strength to strength in its programming and has gradually become the fine professional outfit it is today. Having begun small a decade ago it is now one of the permanent fixtures in the opera-world’s summer calendar.

This is in no small part due to its continuing support by The Royal Borough of Kensington and Chelsea. At a time when most local authorities are pulling in their horns, Kensington & Chelsea has provided a worthwhile amenity not only for local residents but also the world beyond. Of course, providing a high-profile opera season also benefits local businesses, bars, restaurants and other facilities.

And Holland Park also happens to be one of the nicest spots to spend a summer evening enjoying good music. Naturally enough this cannot be achieved without some sort of sponsorship and this year sees Korn/Ferry International, one of the world’s leading executive search and management consultants, coming on board. Korn/Ferry will be sponsoring Opera Holland Park for the next three years. Additionally, the City of London Sinfonia returns for the fourth year running as resident orchestra.

Since 1988 the Holland Park Theatre has been housed under a high tensile fabric canopy. This was planned to last from fifteen to twenty years and it has served the theatre well. Holland Park Theatre is the only ‘open air’ theatre to have more or less complete coverage against the elements. Hitherto, with its open sides, however, it has sometimes been a little draughty and also lets outside noise to seep in, mostly that of aircraft and the calls of the peacocks that roam around the park.

This year the canopy has been replaced by a new structure designed by Architen Landrell, offering a one-thousand seating capacity (that’s 200 more seats than before and with extra legroom) which features more comfortable seating, integrated public space and hospitality facilities including a mezzanine floor in the foyer. The de-mountable temporary structure is designed to “offer comfort and space with a sympathetic look that maintains the atmosphere for which the venue has become well known.”

The canopy is supported by four 85-feet masts and offers a covered area of over 1600 square metres. Using engineering theory similar to that of the original canopy, the saw-tooth peaks and elegant lines should provide more than just protection from the elements. Acoustically the canopy is designed to offer focused sound in the steeper raked structure using the internal peaks to deflect the sound downwards towards the audience. Good sight-lines have been retained and a lateral walkway with a large under-seating entrance has improved the rate of entry and exit and increased the row depths.

The next production is Rossini’s “Il barbiere di Siviglia”, from 30 June. Robert Dean conducts Tim Carroll’s production with Toby Stafford-Allen as Figaro, Frances Bourne as Rosina, Brad Cooper as Bartolo and Matthew Hargreaves as Basilio. This is in repertory until 14 July with a rare production of Delibes’s “Lakmé” with Alison Bell in the title role of a piece about love and betrayal in the Orient. Tom Hawkes directs and Noel Davies conducts.

The final pairing of the season is Verdi’s “La traviata” and Montemezzi’s “L’amore dei tre re” (24 July-11 August). The first, conducted by John Gibbons and staged by Elaine Kidd, has Kate Ladner as Violetta and Sean Ruane as Alfredo. “L’amore dei tre re” (The love of three kings) is a true rarity and continues Opera Holland Park’s policy for introducing neglected works. Written in 1910, it is reminiscent of the work of Puccini, Verdi, Catalani and Wagner among others, yet Montemezzi still manages to find his own voice. It tells of a time in the tenth-century when Italy was invaded by barbarian hordes and presents a love-story between Fiora who has been married against her will to Manfredo, son of the ageing and blind King Archibaldo. Amanda Echalaz sings Fiora, with Olafur Sigurdarson, another OHP favourite, as Manfredo and Mikhail Svetlov as Archibaldo. Peter Robinson conducts Martin Lloyd-Evans’s production.