Actress Anne Reid is branching out into the world of cabaret… 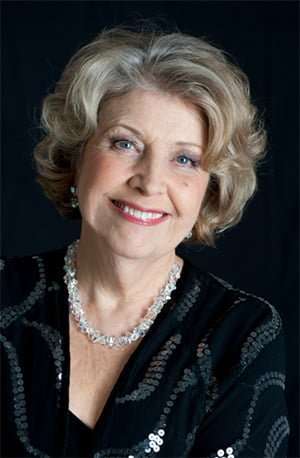 When I first met Anne Reid, many years ago, she was finding it difficult to get back into the business, after looking after her family. However, along came Victoria Wood, since when Anne has rarely looked back. And she found a gift for comedy which her appearances in Wood’s dinnerladies brought out to the full. Her exchanges with former fellow Coronation Street alumna Thelma Barlow (Mavis Riley) were hilarious and often threatened to take the limelight away from Wood.

Long ago remembered for being an early casualty on Coronation Street (her character Valerie Tatlock, Ken Barlow’s first wife, accidentally electrocuted herself) Anne Reid left the series in 1971 to bring up her family. Before Coronation Street and after leaving RADA, she had worked with Tony Hancock and Benny Hill in the 1950s, and was in the ITV series The Adventures of Robin Hood. Later she appeared in other television series such as Crown Court, The Mallens, My Father’s House, and the BBC’s Bleak House. She has appeared in the old-style version of Doctor Who as well as the contemporary series.

1991 saw her in several series (Josie Smith, The Upper Hand, and David Nobbs’s Rich Tea and Sympathy). More television came along, pausing only slightly to take in Wallace and Gromit, for which Reid supplied the voice of Wendolene Ramsbottom in A Close Shave in which Wallace takes a shine to the owner of a wool shop, the said Wendolene. In 1997 she was in the film of the late Gilbert Adair’s Love and Death on Long Island, and the millennium saw Reid in several films, including Hanif Kureishi’s The Mother, with Daniel Craig, for which she was nominated for a BAFTA. She appeared in Ricky Gervais’s Cemetery Junction, and a television film about Barbara Cartland, In Love With Barbara. In 2010 Reid accepted an OBE for services to drama.

So, a lot of television, some films, but there’s still all that theatre work, too. Anne Reid’s first venture into musical theatre was Cole Porter’s Out of This World, and she loved it. She had sung and played piano for her and friends’ amusement. However, after Chichester she didn’t think anyone would ask her again to do a musical. “I gave all that up and got rid of my practice tapes… so I had to start again and bring it back.” That was when she was asked to appear in Sondheim’s Into the Woods at the Royal Opera House in 2007. She had started to sing seriously about twenty-five years ago after listening to the American singer and actress Barbara Cook, who has given Anne “more joy in the theatre than anybody else”. But, quoting her friend Victoria Wood, “it’s a question of bottle”. She found her bottle and was very good as Jack’s mother in Into the Woods, displaying flair for both music and comedy.

In 2008 Reid was talking about doing a cabaret act, something she had nurtured for decades. The dream came true last November (2012) at the St James Theatre in Victoria. At London’s other new cabaret room, she is repeating the experiment with a mixture of material including new items. Her taste in music is eclectic – one moment she can be breaking your heart with the plangent words and music of Amanda McBroom’s ‘Errol Flynn’ and the next she can have you in fits with a number from an old Hermione Gingold revue.

Whereas some cabaret artists stick to well-known songs, Anne Reid is not averse to including Broadway rarities from such shows as Fiorello, The Happy Time, and Guys and Dolls, as well as the more familiar songs of Cole Porter, Jerome Kern, Johnny Mercer, Henry Mancini, Marvin Hamlisch, Rodgers & Hammerstein and the Gershwins. She even delves into some rarely heard numbers by Sondheim. You will be lucky to get into see Anne Reid at The Crazy Coqs, but this is one musical lady who should not be missed.