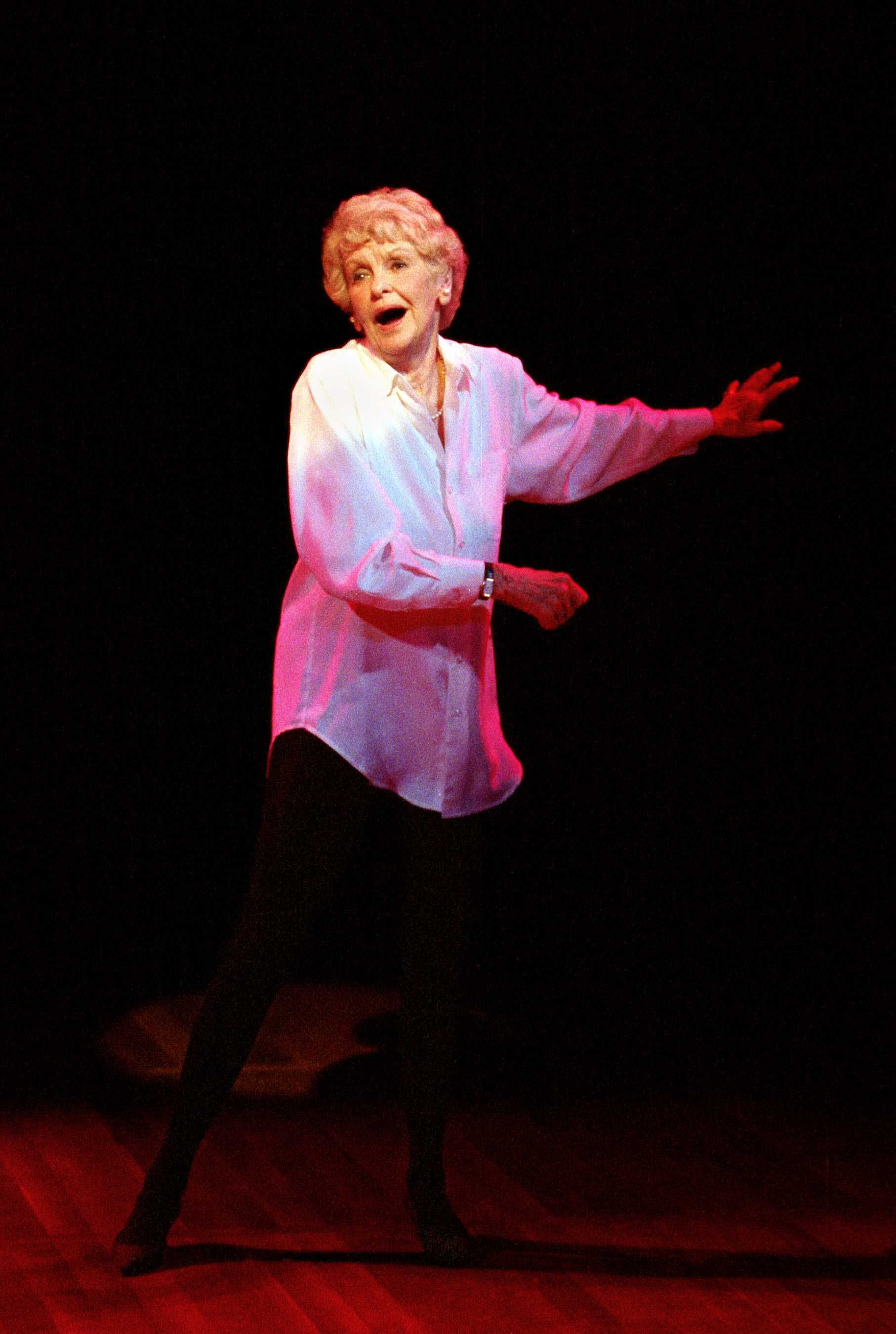 Actress, singer, cabaret artist and raconteur Elaine Stritch died at her home in Birmingham, Michigan on 17 July 2014. She was 89. She had not long retired and only last year saw the release of Chiemi Karasawa’s biographical documentary, Elaine Stritch: Shoot Me. It played the 2013 London Film Festival and is on DVD. The film is a summation of a long, busy and sometimes hard life in the theatre by an enigmatic, charismatic and perhaps intangible talent, but one which lit up her many appearances with total honesty and a caustic sense of humour. Legend, icon, prima donna, eminence grise – Stritch was all of these, with her jaundiced but nonetheless charming view on life that obeyed no rules. She had problems with alcohol and she developed diabetes. Difficulties aside, she was her own mistress and allegedly not easy to work with. However, the extra effort required to understand Stritch was always worth it.

London theatregoers got to know Elaine Stritch initially in Noël Coward’s musical Sail Away, at the Savoy Theatre in 1962. It might have been made for her – the part of Mimi Paragon. Stritch played a brash, outspoken, middle-aged American divorcee and hostess on a British cruise ship who has to deal with the problems of her passengers, while being courted by a much younger man. Sounds tailor-made but it wasn’t. She was cast in a smaller role until Coward and choreographer Joe Layton decided that, as Stritch had a more suitable voice for musical comedy and was a better dramatic actress, her role should be combined with that of the leading lady … the rest being theatrical history. Although the show was old-fashioned, even by Coward’s standards, Stritch was outstanding. It was a modest hit on Broadway (167 performances) but a bigger success in London where it notched up over 250.

Although Stritch had made films in the 1950s, she never became a household name on the strength of them. She referred to her movie career as “laughable”. The re-make by Charles Vidor of A Farewell to Arms, in 1957 with Rock Hudson, is probably the only one remembered, in which Stritch played Hudson’s nurse. However, prior to this, Stritch had been performing since 1944 in a wide range of plays and musical shows such as What Every Woman Knows (1946), Angel in the Wings, and The Little Foxes (1947), Call Me Madam (1950, understudying Ethel Merman and on tour), Anything Goes (1950), Pal Joey (1952), Panama Hattie, and On Your Toes (1954), Bus Stop (1955), and Goldilocks (1958). 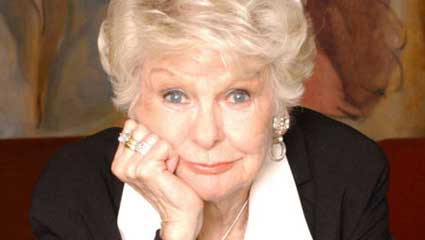 Following Sail Away she was in Who’s Afraid of Virginia Woolf, The King and I, The Grass Harp, Wonderful Town, Private Lives, Mame and, in 1970, Stephen Sondheim’s Company. This last had out-of-town previews in Boston where Variety (the US showbiz bible) found the songs “undistinguished”. When the show hit Broadway, that opinion didn’t stop it from running for over 700 performances. Company is about five married couples and how they try to persuade their friend Bobby to commit to a relationship. Packed with brilliant songs the show gave Stritch two great numbers as Joanne, a difficult broad, unhappy and alcoholic – ‘The little things you do together’ and she shone in particular in her 11 o’clock number, ‘The ladies who lunch’ which Joanne delivers as a bitterly ironic diatribe on the loneliness of an unhappy marriage. In some way it became Stritch’s personal anthem as she almost growled out the words in her unsettling, rasping voice.

Company: Original Cast Album was a documentary by D. A. Pennebaker of the recording of the album in which Stritch just couldn’t hack it at the time, even after many takes. Dawn breaks, following a long day in the studio, and the orchestra goes home having recorded ‘The ladies who lunch’ minus the vocals. Stritch returns to the recording studio after a matinee and does a perfect performance. Asked at the time what she thought of the film, she answered: “It’s fine if you want to see Margaret Rutherford doing the Judy Garland story.”

Following Company Stritch moved to London where she holed up at the Savoy. In 1973 she was in Tennessee Williams’s Small Craft Warnings at Hampstead Theatre, where she met her future husband John Bay. In 1974 she appeared in Neil Simon’s The Gingerbread Lady at the Phoenix Theatre. From 1975 to 1979 she made a sitcom for London Weekend Television called Two’s Company, by Bill McIlwraith, with Stritch playing an American thriller-writer living in London, with Donald Sinden as her butler. The two hit it off and the series ran for nearly thirty episodes.

Stritch continued to work in the theatre in America, to where she had returned in 1981. Sadly, a year later her husband died. Highlights of the rest of her career include Sondheim’s Follies at Lincoln Center (1985) in which she sang ‘Broadway baby’ and was outstanding even among a cast including Barbara Cook, George Hearn, Mandy Patinkin, Lee Remick, Carol Burnett, Betty Comden, Adolph Green, Liliane Montevecchi, Phyllis Newman, Howard McGillin, Liz Callaway and Licia Albanese. She was also in Show Boat in 1993 in both Toronto and New York, Edward Albee’s A Delicate Balance (Broadway, 1996) and in 2010 took over the role of Madame Armfeldt from Angela Lansbury in A Little Night Music.

We didn’t see Stritch again in the UK until 2003 when her one-woman show Elaine Stritch at Liberty played The Old Vic. Autobiographical but written with John Lahr, it’s a wonderful summation of her life, career and thoughts interspersed with songs. Following seasons in New York and London it toured the US and UK and won a Tony Award, a Drama Desk Award and, when it was filmed in 2004 by Pennebaker, it took an Emmy. She had done a lot of television work from 1948 right up to 2012 and was often a guest in chat shows both in the US and the UK (Parkinson, Wogan, Russell Harty).

There were more films including Alain Resnais’s Providence, Woody Allen’s September and Small Time Crooks, Cocoon: The Return with Don Ameche and Gwen Verdon, Monster-in-Law with Jane Fonda, and, her swansong, 2013’s Shoot Me. There were also cabaret appearances, often at the Café Carlyle in New York (where she was also resident) and she recorded albums, cast recordings, and a delightful one of standard numbers, simply entitled Stritch. She is in mellow mood. On a radio phone-in many years ago, she claimed she had just returned from recording an album of late-night songs, but then it never appeared. Does it still exist?

Although we have the recordings and the DVDs, this consummate performer will be sorely missed – a great talent and a great lady, a legendary performer unlike any other.