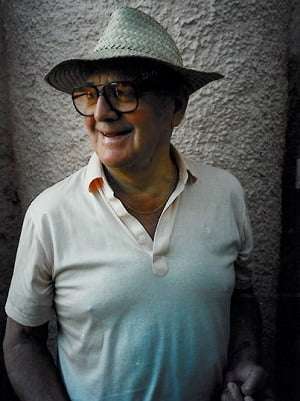 The name of the English composer and lyricist Sandy Wilson, who has died aged 90 (on 27 August 2014), will always be indelibly associated with his show The Boy Friend (1953), a tongue-in-cheek send-up of the sort of musicals that were meted out with great regularity in the 1920s, such as, in particular Rodgers & Hart’s The Girl Friend. It was Wilson’s only really successful show, of which audiences never seemed to tire. It used to be said that ever since it was first produced there was a production somewhere in the world, perhaps even more than one, every week of every year. Its success meant that Wilson need not have worked again. It also made a star of young Julie Andrews who took over the ingénue lead when the show went to Broadway.

Born in Sale (Cheshire) on 19 May 1924 to parents who had met in India, Alexander Galbraith Wilson was the only boy in a family of three girls. His earliest memories involve his sisters dancing to the then current musical fads and when he saw his first pantomime he was so taken by it, he wrote to the leading lady Dorothy Ward. Although his father, a strict Scottish Presbyterian, disapproved of the theatre, Sandy’s interest in music and drama did not wane, and he created a piece around the Pyramus and Thisbe story while still at primary school. At Harrow School he wrote a version of Aristophanes’s The Birds, appeared in other productions, took piano lessons and learnt the popular songs of the day.

During World War Two Wilson worked as a clerk in the Ordnance Corps before going up to Oxford where he wrote songs and sketches for the university revues. On leaving Oxford he contributed to some West End revues in which he also appeared and he wrote for his favourite performer Hermione Gingold. Asked by the Players’ Theatre in London’s Charing Cross in 1953 to write a little show for its music-hall company, Wilson came up with The Boy Friend, a perfect pastiche of the mindless shows of the 1920s which had great songs by not only Rodgers & Hart but also Jerome Kern, Irving Berlin and the Gershwins, but which were ill-served by their inane books.

Being very tongue in cheek – or one might even say tongue in chic – The Boy Friend is a charming bit of nonsense about the girls at a French Riviera finishing school and their love lives. One of them, Polly, is a millionaire’s daughter but still has no boyfriend. When errand boy Tony arrives, there is an immediate mutual attraction. At a masked ball Tony hides from his rich parents, Lord and Lady Brockhurst, but is later reunited with Polly and his folks, while the other girls get engaged to their best beaux, and then everybody gets married and lives happily ever after.

Not much of a plot but a delightful divertissement, and Wilson’s songs made the piece come alive. The numbers became classics and include ‘I could be happy with you’, ‘Won’t you Charleston with me?’, ‘Fancy forgetting’, ‘Perfect young ladies’, ‘A room in Bloomsbury’ and ‘It’s never too late to fall in love’ – all memorable and with witty lyrics and catchy tunes. It was such a success at the Players’ that Wilson was asked to expand it into a full-length musical which returned to the Players later on in 1953 before transferring to Wyndhams Theatre for a five-year run of over two-thousand performances, a record for London until Julian Slade’s Salad Days came along.

Slade and Wilson were contemporaries and in some ways were both one-hit wonders; Slade never had a greater success than Salad Days. Incidentally, the two camp characters, Julian and Sandy, played by Hugh Paddick and Kenneth Williams in the BBC Radio comedy show Round the Horne in the 1960s, were allegedly based on Slade and Wilson.

The Boy Friend went to Broadway for over a year’s run and almost five-hundred performances. Some of the original London cast went with it plus Julie Andrews, Millicent Martin and Moyna MacGill, Angela Lansbury’s mother. It was, however, not a happy time for Wilson and his director Vida Hope who were banned from entering the New York theatre by the US producers who wanted to change the show in what was probably the first case of ‘dumbing-down’, in order to make it more palatable for an American audience. However, Andrews was discovered and, on the strength of it, was booked for My Fair Lady.

The Boy Friend has been constantly revived all over the world including London in 1966 at the Comedy Theatre, in 1984 at The Old Vic and in 2006 at the Open Air, Regent’s Park. The Players’ Theatre revived it in 1995 to celebrate the show’s fortieth birthday. Wilson never cared for Ken Russell’s 1971 film version, which the director turned into a pastiche Hollywood musical, with Twiggy and Christopher Gable. It isn’t that bad unless you’re a purist like its author.

Wilson carried on writing, shows such as The Buccaneer (1955), about a comic newspaper for children, which played at the Lyric Hammersmith for just 170 performances. The Finborough revived it a couple of years ago and it proved to be worthwhile. Valmouth (1958), an adaptation of the eccentric Ronald Firbank novel, played London and New York and was revived in 1982 at Chichester. Wilson contributed to Peter Cook’s revue Pieces of Eight (1959) with Fenella Fielding and Kenneth Williams. Divorce Me, Darling (1964) was a sequel to The Boy Friend with the same characters seen some ten years later with takeoffs of 1930s’ songs such as by Cole Porter. It opened at the Players’ (again) and transferred to the Globe but ran for fewer than a hundred performances. Chichester, however, revived it in 1997.

The Palace Theatre at Watford premiered Wilson’s show, As Dorothy Parker Once Said (1969), a compilation of the humorous stories by the American writer. Libby Morris was excellent at delivering Parker’s sophisticated material and it was very entertaining. His Monkey Wife (1971) was a musical version of the John Collier story about a man’s relationship with a chimpanzee, but it only played Hampstead Theatre. The Clapham Wonder (1976), based on Barbara Comyn’s book The Vet’s Daughter, opened at the Marlowe Theatre in Canterbury for a short run. Finally, Wilson wrote a musical version of Aladdin but not as a pantomime, even though it was the 1979 Christmas show at the Lyric Hammersmith.

If nothing else succeeded for Sandy Wilson quite like The Boy Friend, at least he made a good living out of a little show that was written for a fringe company as an end-of-season treat. It doesn’t happen too often but when it does, it’s the stuff of dreams. No doubt it will still be popular long after many of the current West End musicals are dead and buried.