The Royal Opera House is currently making an exhibition of Joan Sutherland! Until 11 February 2012 you can view costumes that Dame Joan wore in Covent Garden productions together with numerous related photographs and her talking on film. Elizabeth Jones and I had been at the launch reception; and then we returned to ROH – on 8 December – to talk and tour with Cristina Franchi, Exhibitions and Heritage Publications Manager, and the curator on behalf of ROH Collections of the Tribute to Joan Sutherland. It wasn’t just Joan’s death late in 2010 (at the age of 83) that triggered the display? “We did show costumes of hers before she died; we did an exhibition for the 150th-anniversary of the theatre when we filmed her and when we displayed a costume from Lucrezia Borgia, a different one to that showing now.

About ROH Collections (there’s a link below): “We have a large collection, over six-thousand items of costumes alone about the history of the Royal Opera since 1732 and its different geneses as a working theatre.” And now some facts about the Joan exhibition: “People can start to see it in the foyers. Just come in, we have daytime opening. It’s free between 10 o’clock and half-past-three; just pop in off the street and self-guide yourself with the leaflet. But check first with the box-office in case we have a matinee on. Or you can have a dedicated Joan Sutherland tour, with more in-depth coverage and anecdotes. That needs to be booked and costs seven Pounds.”

Joan enjoyed a many-decade relationship with The Royal Opera. “She was much-loved here and always came back for the bi-annual staff reunion. There was always a buzz: ‘Joan’s here’. We were all very sad when she died. So an exhibition seemed a good idea. The Sutherlands were great collectors.” (Joan’s husband is the conductor Richard Bonynge.) “She would buy her costumes from Royal Opera after a run. But she didn’t want to see them become tatty, so she then had a big sale in London and we bought some of them back including the big white dress with the blood on it. And we mostly knew who bought the others; so a lot of them have worked their way back to us! Recently we recovered a costume for Micaëla (in Bizet’s Carmen), which is from very early in her career.”

How much influence did Joan have when her costumes were being designed? “When she was serving her apprenticeship here, for seven years, she wouldn’t have had much influence. But then Zeffirelli came. In her early years Joan was physically unconfident; she was quite tall and she felt awkward on the stage. But Norman Ayrton helped her with that, and she did exercises at the barre. Zeffirelli said there’s a beautiful woman here and he was amazed at her voice and that she didn’t lose any of it when moving around the stage. They became great friends. He designed her costumes to give her a waist; and the photos record that she was gorgeous. Some of the costumes are very heavy: the one for Lucrezia Borgia took three of us to carry it!” 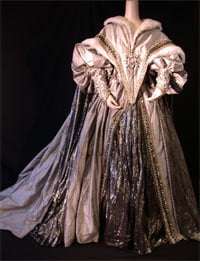 In some respect Joan fell into the bel canto repertoire by accident. “Callas had started the revival of such operas and she and Richard persuaded Joan to sing it; Joan thought she was a Wagnerian. The numbers of singers who can sing that range are few and far between. Her first named role, Clotilde, in Norma, is from 1952. She watched Callas rehearse and Richard was teaching her the roles. They worked and worked and worked.

Elizabeth asks if Cristina met Joan. “Yes, in 2006, for archive projects. She hated to be interviewed, but was always happy to help. But she couldn’t say no to talk to the Opera House.” We stroll around with Cristina looking at the many photographs, not least the dress with blood on it. “It’s a beautiful photograph”, remarks Elizabeth and she then spies the Zeffirelli-designed outfit for La traviata; and, greeted with Liz’s “that’s straight out of Vogue 1967” comment, comes a shot from The Magic Flute, conducted by Klemperer. The production was from 1962. Cristina mentions that Joan and Richard gathered “a team of people around them who they trusted, not least Pavarotti. You can see from the photos that they had fun. Pavarotti learnt so much from Joan; he said he could never see her breathing!” 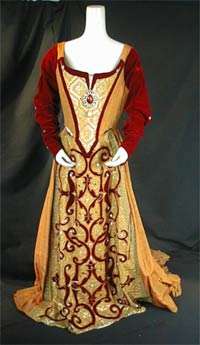 Clearly Joan was held in admiration and affection by all at ROH. “Joan is a big part of the Royal Opera’s history. Her full farewell was Anna Bolena in 1988 – the dress is on view in the foyer – and her final farewell was in the ‘Party Scene’ in Die Fledermaus in 1990. She had openness; what you saw is what you got. She was very modest – there were no elements of being a diva – and it was fascinating to talk to her: she was hugely knowledgeable about opera, singing and music. She was a real trouper. She didn’t make a fuss and just got on it.”

Elizabeth wonders if Joan was a mentor for younger singers. “She worked with a lot of young singers. She’d been on the Jury of Cardiff Singer of the World for many years. She felt though that today there is too much pressure on young singers to take on roles. She learnt things slowly and let her voice develop – that’s why she had such a long career. She looked after her voice and worked up to roles. She was concerned that singers today can ruin their voices by doing too much too soon. Behind the scenes, she and Richard encouraged a lot of singers, here and in Australia and wherever they were; they did a lot of moving around.

“David Webster, our first general administrator, from 1946, heard Joan, and after four auditions – she didn’t get in straight away – she was taken on. Webster thought Joan could be a useful singer and, with work, better than that. Lord Harewood and Edward Downes also who saw her potential. Considering the star she became she really had a hard time getting established and accepted.”

Returning to the Exhibition, whether visited on a whim or through the conducted tour, “there are four large costumes in the foyer, which span from 1952 to the Anna Bolena, her last complete work here in 1988. There are a couple of other costumes on the ground floor, including for Tippett’s The Midsummer Marriage. If people go to the Amphitheatre Gallery we have an overview of her whole career; we have tried to have photographs of all the roles she sang here and the people she performed with. And there’s film of her singing Lucia in 1959 when she was on the threshold of her international career. In the interview you get an idea of how delightful she was: she had time for everybody.”

It is an indeed and inspiring Exhibition – enlightening and rather moving. On our way out Liz and I take another look at the four costumes housed just inside the Carriage Entranceway (Main Entrance). Elizabeth describes the costume for Anna Bolena as “silk grey taffeta and there’s a corona with a picture of Joan.” Then back full-circle to the one for Clotilde (in Norma) from 1952, which is “very biblical”. We can’t describe the other two costumes for you because a steward moves us on – very politely – as the Royal Opera House is about to close…

Calling all balletomanes, the next Collections exhibition focuses on Monica Mason (“A Life with The Royal Ballet”), opening late February 2012. Meanwhile, Joan Sutherland is given a handsome Tribute – for fans and admirers, and for anyone interested in knowing and seeing more about her, one of the great opera-singers of the second-half of the last century.