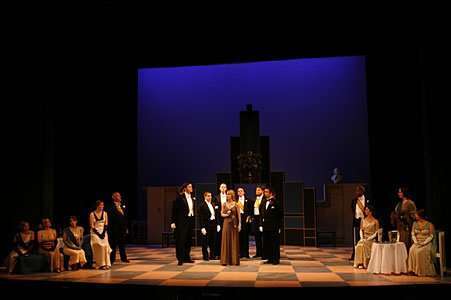 What is now the RADA Studios space is no stranger to housing opera. It was the base of Music Theatre London until it ceased performances in 2005. Apparently MTL is not defunct, just dormant, and hoping to film some of its productions. MTL was also successful in its tours of the UK and Europe, even managing to acquire sponsorship, although not from the Arts Council. It’s a company that is sorely missed and which produced more enjoyable work than at more prestigious addresses.

Music Theatre London, under the aegis of founders Nicholas Broadhurst and Tony Britten, had an avowed aim to de-mystify opera, to make it approachable, and always insisted on English translations to make the operas relevant, lively settings, and also used chamber instrumentation, with scores arranged for ensembles, and with trained actor-singers who could make drama really theatrical and comedy truly funny.

These ideals should be uppermost in the mounting of any opera. One may go to the theatre just wanting to hear a beautiful score by Mozart, Rossini, Verdi, Puccini or Tchaikovsky, but the music still needs to be placed in context with the tragedy or the humour of the piece in order to make sense of it. This is exactly what Opera UK is doing now. A relatively new company, Opera UK, was founded by John Mullis in 2005, when MTL ceased. Mullis’s intention then and now is to celebrate the wealth of young talent by offering graduates of the UK music colleges the opportunity to sing major roles early in their careers. Storytelling placed in a stylish setting is at the heart of Opera UK’s productions with as much importance placed on the acting as on the singing. 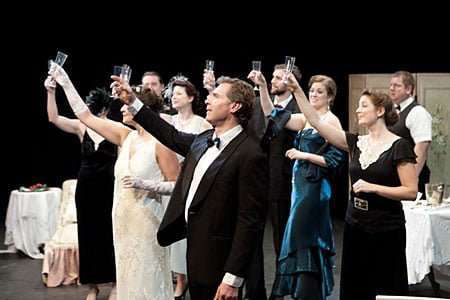 To date Opera UK has staged ten new productions including Tosca, Simon Boccanegra, The Merry Widow, Così fan tutte and The Barber of Seville, four of which have toured the UK and Ireland and played seasons in Dubai. Concert programmes of operatic excerpts are included in its portfolio include Three Little Maids and Friends (a Gilbert & Sullivan evening), There’s No Business Like Show Business (light opera and musical theatre), The Cockney Show (a nostalgia programme), Brush Up Your Shakespeare (songs and speeches from the Bard) and We Will Remember Them (music for war heroes).

La traviata, UK Opera’s latest offering, was unveiled at the RADA Studios last November. It fitted very well into this medium-sized space seating up to two-hundred. Director Jane McCulloch has devised a new English translation, updating the action from early-18th-century Paris to Hitler’s Berlin in 1938. While the passionate love-story unfolds, there are more momentous events happening as Europe prepares for war with Germany. There is nothing wrong with the updating of operas to a later century if it adds credible drama to proceedings. Jonathan Miller did it with Rigoletto, which needed something to take it out of the cap-and-bells era in which it was set (which royal family has a jester these days?). Placing it in the Little Italy of New York in the 1950s was a brilliant idea. A new slant on an old and perhaps dated libretto can often breathe new life into such a piece. Similarly Miller did the same to The Mikado, placing it in a sort of Hollywood hotel of the 1920s, while his ENO Der Rosenkavalier was set just before the First World War with the inevitability of young Octavian being killed on active service, thus giving the music an even greater sense of loss.

McCulloch has been careful not to tinker too much with the plot. We see a Nazi officer in full uniform but the rousing of the German populace is kept to an offstage chorus. Simplicity is the keynote here as in most of her productions. The opera is played out by less than a dozen performers and with very good singers. There was certainly no holding back, even in a small venue. Alison Guill as Violetta has a beautiful, warm-toned voice that can be modulated with exceptional finesse. As Alfredo, Andrew Morris has a strong, rich tenor evincing credibly both the romantic and the petulant side of the character. Baritone Adam Miller makes a fine Germont. There is good support from Loic Guguen (a formidably Wagnerian baritone), Sarah Champion and Jacqueline White.

Looking rather like a Palm Court orchestra at the side of the stage, the musicians give a very distinctive and pleasurable account of Verdi’s score. Nicholas Allen’s arrangements (for violin, viola, cello, woodwind and piano) work perfectly well and convey the music’s passion, with Stephen Hose totally in charge at the keyboard.

Opera UK’s productions are always welcomed in the provinces and its tours have proved the making of the company. The 2013 tour starts on 6 April at the Palace Theatre in Newark, followed by a gala performance on 9 April at the Bloomsbury Theatre (Gordon Street, London NW1), another highly suitable central London fringe venue for any small opera company. Then comes performances at the Garrick Theatre, Lichfield, on 20 April; at the Theatre Royal, Bury St Edmunds, on 8 and 9 May; the Buxton Opera House on 16 May and at the Hall for Cornwall in Truro on 4 July. Opera UK receives no public grants is to be congratulated on its enthusiasm and determination to take good productions to ever-increasing audiences often starved of opera performances.