Michael Darvell talks to Sofiane Sylve, one of four ballerinas dancing the dual roles of Odette and Odile in English National Ballet’s Swan Lake at the Royal Albert Hall… 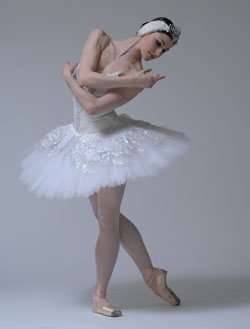 You can’t keep a good production down and, to celebrate the tenth anniversary of its Swan Lake, English National Ballet is staging the ballet again at the Royal Albert Hall from 13 June. Derek Deane’s in-the-round staging is the largest production of its kind in the world.

This will be its fifth appearance at the Kensington venue and it’s a work that could have been made for the Hall. There are over 120 dancers, with an orchestra of over 80 musicians plus acrobats, jugglers and some sixty swans gliding across the Arena. The dramatic tale of Prince Siegfried’s love for the Swan Queen, Odette, and their battle against the evil influence of Rothbart the magician, is set to Tchaikovsky’s glorious score, which is arguably the most popular of ballets.

Sharing the dual roles of the good Odette and the bad Odile is French ballerina Sofiane Sylve who is partnered by Stuttgart Ballet’s Principal Dancer Friedemann Vogel as Prince Siegfried. The other pairings are Agnes Oaks and Thomas Edur, Daria Klimenova and Dmitri Gruzdyev, Elena Glurdjidze and Arionel Vargas, and Erina Takahashi and Cesar Morales.

ENB’s Artistic Director, Wayne Eagling, sees Swan Lake in the round as a fundamental part of the Company’s repertoire, a huge challenge and a very rewarding one; as he says, “the fact that we are bringing this production back to the Royal Albert Hall for the fifth time is a testament to the public’s interest in a ballet produced in an unusual way and of the Company’s innovative handling of this classic work.” Following the London season ENB will take the production to the Palais de Versailles.

For Sofiane Sylve, it will be her debut at the Kensington venue. “This is the first time I have danced at the Royal Albert Hall so it’s very exciting. I am very curious to see what it’s like but am looking forward to it.”


We were talking when Sofiane was in London to promote the season and was taking a few days off from her regular work for New York City Ballet. Before she joined the Company, she was a guest artist with NYCB in Balanchine’s The Nutcracker, Kammermusik No.2, Serenade, Slaughter on Tenth Avenue, Symphony in Three Movements and Western Symphony. Otherwise she has divided her career between the Budapest Opera, Teatro di San Carlo di Napoli, the National Ballet of Finland, the Bolshoi, the Vienna State Opera and the Nationale Ballet of the Netherlands where she met Wayne Eagling. Her career has been a pleasing mixture of classical and contemporary work. Does she have any preference for either one or the other?

“I’ve done two versions of Swan Lake before with the Dutch National Ballet and Budapest Opera. I enjoy the combination of classical and modern ballet. Although I’ve done work by Balanchine, I still like to be able to switch around, as I like to do varied work. Classical ballet is the hardest in the sense that you have borders that you cannot cross or play around with it, because this is what it is supposed to be. With a modern piece, however, you have the freedom of interpretation, whereas in classical ballet you have to do what is required. The basics are the same in any production of, say, Swan Lake: you have the Adagio, the Variation, the Coda, so basically you have to reach a certain level of perfection because classical ballet is just so hard. You have to train for it for the longest time and so it’s something your body has to keep in touch with. Otherwise, you would have to leave and do something else.”

There was no particular plan in Sofiane’s childhood for her to be a ballerina. Like many young girls, she went to ballet school from the age of eight and so got used to being at the barre every day as a matter of course. “Wherever you are from – France, Italy, Spain, Britain, Russia or America – dancers use the same dance language, even if some of the techniques vary from place to place. But you learn to reinvent yourself depending on where you are.

“Although we may come from a different direction and approach things in a different way, we all reach a central point eventually. Go anywhere in the world and you’ll find that each country has its own dance culture. France obviously has a huge background of great classical ballet, but then so does Russia and even the USA has its own traditions and culture. You can’t say that one place such as France, for instance, is the best place to dance, because that’s not where everybody ends up working. Obviously, being French, I feel very comfortable there. But, when you see dancers at the barre, you can always tell where they are from, by their first steps – France, Russia or the US – it’s fascinating.”

Having performed in Swan Lake before, is it difficult for Sofiane to adapt to a new production with a different choreographer? “The very first version of a ballet always comes back to you, but your body is so used to training and learning new things and then performing, that it can easily adapt. There’s always something you can add to a piece and there’s always a chance to connect with somebody new, so it doesn’t really matter where you are. The body is an amazing machine which has its own memory and when you hear that music you know what’s going to happen, whether you are entering from the left or from the right, so it’s always going to be the same unless you’re in something really groundbreaking.”

With such a concentration on practice and getting it right, do dancers become obsessive about their bodies, and is there time to just switch off and relax? “I don’t think I’m obsessive. My body is my tool so, in order for me to use it properly, I have to keep it in good shape with discipline. And remember that I do travel a lot, so I have to find time to take care of myself in the breaks between jobs. This has been a strange year for me. I’m pretty much based in New York but before that I was in Amsterdam, then went on tour to Washington, then back to New York and now London and Versailles and then back to New York after Swan Lake. I like to spend time getting to know the other dancers in the company, which is why I don’t like to do guest appearances because you don’t really get into anything, you just skim the surface. I would rather be around people because that makes me more comfortable on stage. Just flying in and out makes that quite impossible.”