A tinge of sadness coloured the tenth Lionel Tertis International Viola Festival, held at Port Erin from 20 to 27 March, but the abiding impression was that we heard some first-rate recitals and an excellent young American player was crowned as winner of the competition.

The sadness stemmed from the death in November, aged 94, of Lillian Tertis, widow of the great British violist whose achievements are celebrated at this event. She had attended the first eight festivals and had played her cello (a Tertis model, of course) at the inaugural one in 1980. She was not entirely absent this time, as sculptor Ben Dearnley presented an alabaster bust of her to the Erin Arts Centre and it presided over all the events in the auditorium. For the first time, the festival was held not in late summer but in early spring, when wind and rain can lash the Isle of Man. And they did…

By the time we arrived, 153 would-be competition entrants had been reduced to a more manageable 49; and Chinese juror Su Zhen, a Beijing Conservatory professor, had been rescued from the UK immigration authorities – just as well, as she had to give the first recital. As befitted a former student at the Royal Academy of Music, she played a British programme by Eric Coates, Rhian Samuel, Delius, Alan Richardson and York Bowen, partnered by pianist Sophia Rahman. The opening notes of Coates’s First Meeting, written in 1941 for Tertis, took one straight to another era.

British fare (Gordon Jacob, Arnold, Delius, Lennox Berkeley and Ireland) was also heard from Martin Outram and his superb pianist Julian Rolton. And Roger Steptoe, composer of the competition set-piece, supported Sarah-Jane Bradley at the piano for a largely British programme including his own Verlaine Songs and Three Pieces. The tonal refulgence of Bradley was beyond praise – no violist in the country makes a better sound. In Alwyn’s Sonatina, Milhaud’s Quatre Visages, Delius’s Caprice and Elegy and Fauré’s Élégie (these latter pieces arranged by Tertis) she was fully in command of the styles. Joining the pair in the various songs, including the three by Bridge and the two by Brahms, was the fine Isle of Man-born mezzo-soprano Adrienne Murray.
Looking forward to hearing former Tertis prize-winner Tatjana Masurenko (based in Germany but representing Russia on the jury), I was not disappointed. As her recordings – now filtering through to the UK – demonstrate, she has a marvellous range of colours at her disposal; and she plays a Testore, much better than the instrument she had in the 1991 competition. Stravinsky’s moving solo Élégie, one of the few pieces in which he lets his mask slip, was the highlight of a St Petersburg sequence of Glinka, Shostakovich, Glazunov and Prokofiev, with Anthony Hewitt at the piano. Rimsky-Korsakov was represented by a coruscating ‘Dance of the Tumblers’ from The Snow Maiden.

Simon Rowland-Jones, one of two British jurors with Garfield Jackson, had Huw Watkins as pianist for his recital and they each contributed a piece, Rowland-Jones his Wiegenlied Variations – where Brahms’s Lullaby is not recognisable until halfway through – and Watkins his Miniatures. They ended with Shostakovich’s Sonata. Rowland-Jones holds the viola at a precipitate angle, which inhibits access to the A string and is not conducive to good A-string tone. But he is an interesting artist. 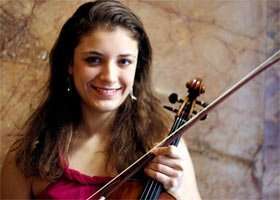 For most of us the competition started with the semi-finals, in which the first of the eight players was the eventual winner, 21-year-old Milena Pajaro-Van de Stadt, an American with a Colombian father and a Dutch mother. She immediately announced herself as a very solid player in the best sense, with an attractive tone and a personality to match. As yet she does not show much individuality but that will come. She studies in Florida with Roberto Diaz and Michael Tree. In Bach, Walton, Paganini, Steptoe’s solo Sonatina – which all three finalists had to play – and to a lesser extent in Shostakovich, she gave excellent performances, fully deserving her £7,000 first prize, a Wigmore Hall recital next January and appearances in London, Paris and Bucharest with the London Schubert Players.

The other two finalists were Kyoungmin Park, 19, from South Korea, a natural performer with lots of personality, and Veit Hertenstein, 24, from Germany, who used a baroque bow for his Bach – even for the Bach-Kodály Chromatic Fantasy – but did not hold my attention although he took up the challenge of the Chaconne for the final. Park received the £5,000 second prize and she has plenty of time to come back again. Hertenstein was rather flattered by the £3,000 third prize.
Two players were unlucky not to make the final. Barbara Buntrock, 27, from Germany, struck me as the most interesting artist on display – and she was using a famous Mariani instrument on which Tertis made his earliest records. Adrien La Marca, 21, from France did an excellent Paganini Caprice No.20 but perhaps it was nervousness that made some of his other renderings seem a little choppy. He picked up three lesser prizes, including one for the best interpretation of the Steptoe, and Buntrock received one. Seungwon Lee (South Korea), Benedikt Schneider (Germany) and Elias Goldstein (who has dual Norwegian and American nationality) also missed out, although I enjoyed aspects of their artistry. Of four violists who appeared in a consolation concert, I most liked Benedicte Royer from France: she performed the first movement of Bowen’s C minor Sonata to the manner born.

We had the usual masterclasses and it was good to see many old friends, including the festival director John Bethell, the genial jury chairman Christopher Yates, Dwight Pounds from Texas, luthier David Hume – one of the few makers who can also play – and the violist members of the Tertis Foundation, Christopher Wellington and Jonathan Barritt.