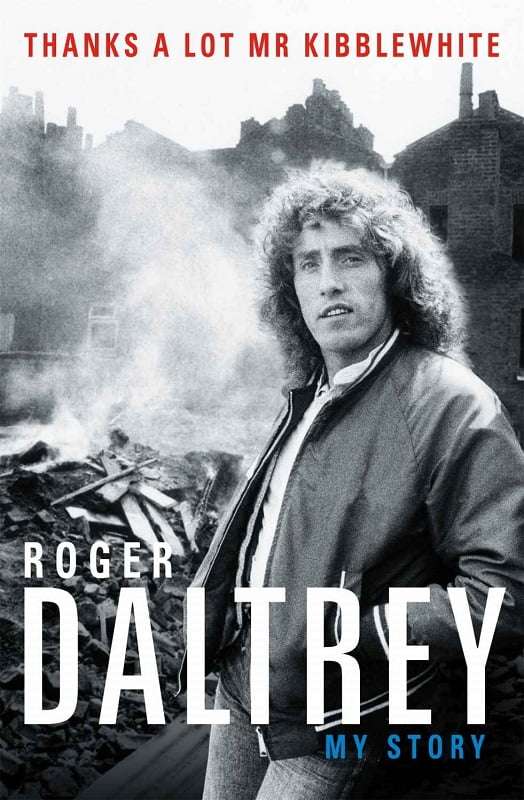 I thought the name seemed familiar when I saw the cover of Roger Daltrey’s autobiography. And indeed Mr Kibblewhite was my headmaster too in the 1950s. So it seems I was at school with three quarters of The Who at Acton County Grammar School. I’m not sure it was the “sheer hell” that Daltrey describes but perhaps if he had behaved himself and not got expelled… but he may not have become the rebellious rock-star he did if he had. I have to say I don’t remember any of them and I’m sure they won’t have remembered me.

This is a readable record of a tumultuous life, written in an easygoing conversational style. Daltrey is at pains to stress the modesty of his background and upbringing in Shepherd’s Bush, and the culture shock he experienced at passing the Eleven-plus and going to a “posh” school. His expulsion (for taking an air rifle to school and another pupil getting shot in a punch up) led to him getting manual work on a building site and later at a sheet metal works and coincidentally when his interest in music began.

Knocking up guitars from bits of wood and wire for getting together with mates to jam in the style of Lonnie Donegan and new influences from the States like Little Richard took him from the turgid monotony of work to a world that was exciting and promised a different life. Gradually his skiffle-band began to get dates in youth clubs, weddings and pubs. Later he made contact with Pete Townshend and John Entwistle, who had been at school with him but with whom he had no contact there.

Both eventually joined his group, called The Detours, original members were weeded out or left and the embryo of The Who was formed. How the group got its name is typical of their freewheeling approach to life. A meeting was held in someone’s flat and names were bandied about. Someone suggested a name which someone else didn’t quite catch. “The who?”, he asked.

Life started to take off, The Who was becoming a success and there was booze and girls. Daltrey managed to get one girl pregnant and family pressure from both sides resulted in marriage and living with her mum. Later he moved the new family to a tower block in Wandsworth which he seems to have regarded as the worst of all possible worlds. More exciting prospects beckoned and the marriage didn’t last. Daltrey claims remorse at abandoning his responsibilities but felt the lure of success in his chosen future was more important.

Managers came and went and eventually The Who fell into the hands of that svelte charmer Kit Lambert (son of Constant) and Chris Stamp (brother of Terence). Keith Moon joined the band and the era of instrument-smashing began. As Daltrey tells it some accidental instrument damage was greeted with much enthusiasm by the fans and with Moon’s natural inclination for mayhem the era of destruction as art form began. With Townshend’s gift for song-writing and the smooth persuasiveness of Lambert The Who took off.

The decision to make a film of Townshend’s rock-opera Tommy with which they had toured with great success moved Daltrey into a new world of acting. Already renowned for his singing he proceeded to add film-star to his range of skills even though he played a blind/deaf mute. Ken Russell must have seen talent in his performance in Tommy and signed him up for his Liszt biopic Lisztomania. The constant touring across the US and Canada , Europe and at home, night after night at a different venue started to take its toll on the band. The drink and the drugs and the women didn’t help and eventually the pressure had tragic results. First with Keith Moon who consumed astronomic quantities of brandy before every concert and then with Entwistle who died in the arms of “a nice lady” (Daltrey’s description) in a hotel bed in Las Vegas.

Daltrey was and is heavily reliant on Heather to whom he has been married since 1971. He writes affectionately about her patience, support and forgiveness (particularly when one of his love-children turned up on the doorstep). They now live the life of a country gentleman and his wife in deepest Sussex.

This is a lavishly illustrated, involving and colourful account of a tumultuous life which will bring back memories to many of Daltrey’s contemporaries and fans.