Kevin Rogers traces the career of young flautist Eimear McGeown’s thus far and her being selected to perform as soloist, with Camerata Ireland under Barry Douglas, as part of the Clandeboye Festival… 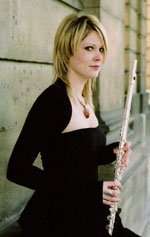 The Clandeboye Festival 2007, which takes place at the Clandeboye Estate in County Down, home of the Marchioness of Dufferin and Ava, is now in its fifth year of hunting out young talented musicians from the North and South of the border through its system of masterclasses and workshops that run alongside the music Festival. At the end of the week a winner emerges to play as soloist with Barry Douglas (the Festival’s founder) and Camereta Ireland on the final night. Last year the talented 25-year-old flautist Eimear McGeown, of Craigavon, County Armagh, won.

The story of young musicians that appear in competitions such as these typifies the struggle to gain wider acceptance and success. How does a talented player, such as McGeown, get herself on to the world’s stage in the future? It all begins with recognising interest in an instrument. For McGeown, that was at the age of seven, when she heard James Galway on the radio and immediately told her mother that she wanted to play that instrument. A few nights later her mother got her out of bed to confirm the choice and, using her Holy Communion money, an instrument was bought. After much dedicated study McGeown made it to Trinity College of Music, London. She graduated two years ago, gaining first-class honours and being awarded the Silver Medal Award in the Wind/Brass/Percussion Faculty.

Since graduating, further study and solo appearances have furthered McGeown’s musicianship. Perhaps moving away from Ireland to London, where there is a lot more music going on, was the only option for someone in her position. Typical examples for McGeown include playing with a Jazz trio in a few London venues such as “The Vortex” and “The Oxford” and also playing in the West End show “The Lord of the Rings”, which appeals to her love of traditional Irish music. There are even ‘gigs’ involving the singer Lemar, all of which adds plenty of variety. McGeown’s musical tastes are as varied as one might expect, ranging from the Romantic classical repertoire to the latest songs from Amy Winehouse.

Since her win at Clandeboye 2006, and as part of the Festival’s commitment to nurturing its own discovered talent, McGeown has appeared with Camerata Ireland on a number of occasions, including giving the premiere of her Trinity tutor Dave Morris’s Flute Concerto – written for her – in the Library of Congress in Washington DC as part of the Smithsonian Festival. She has also appeared on Irish television.

The immediate future for McGeown includes a cycle of competition entries, study and earning money with jazz work and solo appearances. A long-term project for any musician in her position is the building-up of a CV with competition successes and appearances so that auditions with orchestras can lead to a full-time position, which in turn acts as a springboard to greater success. It’s all very hard, but enjoyable, work.

The Clandeboye Festival itself was established by the Belfast-born pianist Barry Douglas. He wanted to give something back to Ireland as a ‘thank you’ for his own success. The Festival begins on Sunday 19 August with McGeown and some ‘friends’ in a recital that covers classical and traditional Irish pieces. On the other days there are concerts given by Camerata Ireland and solo recitals by Barry Douglas.