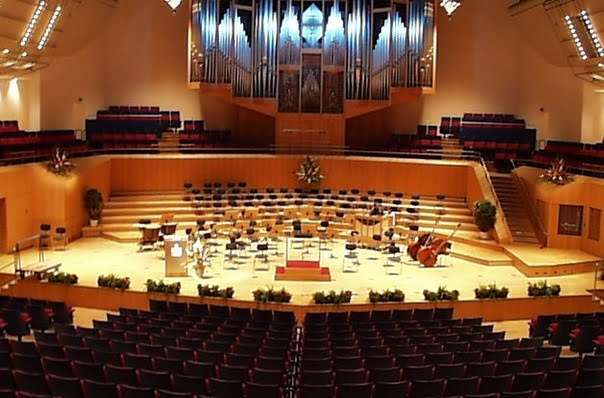 Any wise man knows that it is futile to look for perfection in Life. However Bamberg, the town, its orchestra – one “with a soul”, says Jiří Bĕlohlávek – and its triennial Mahler Competition are somehow miraculously exempted and come remarkably close to the ideal, bearing eloquent testimony to the enduring values of the Enlightenment.

Born under desperate circumstances at the end of the Second World War when the remains of Prague’s German Philharmonic Orchestra reformed in Bamberg, the Symphony Orchestra is arguably one of Germany’s greatest cultural assets, but as well as embodying the Austro-German tradition, it is also outward-looking with deep roots in the music of many other countries.

Bamberg’s significance is reflected in its triennial Gustav Mahler Conducting Competition and this competition, the fifth, was a truly global event in that all five continents were represented for the first time (there was an applicant from the Central African Republic, a 21-year-old Kenyan invited to attend as a guest). There were 381 applicants, whittled down to seven and then five to the semi-final – although in Bamberg the atmosphere is so collegiate that there are no winners or losers. 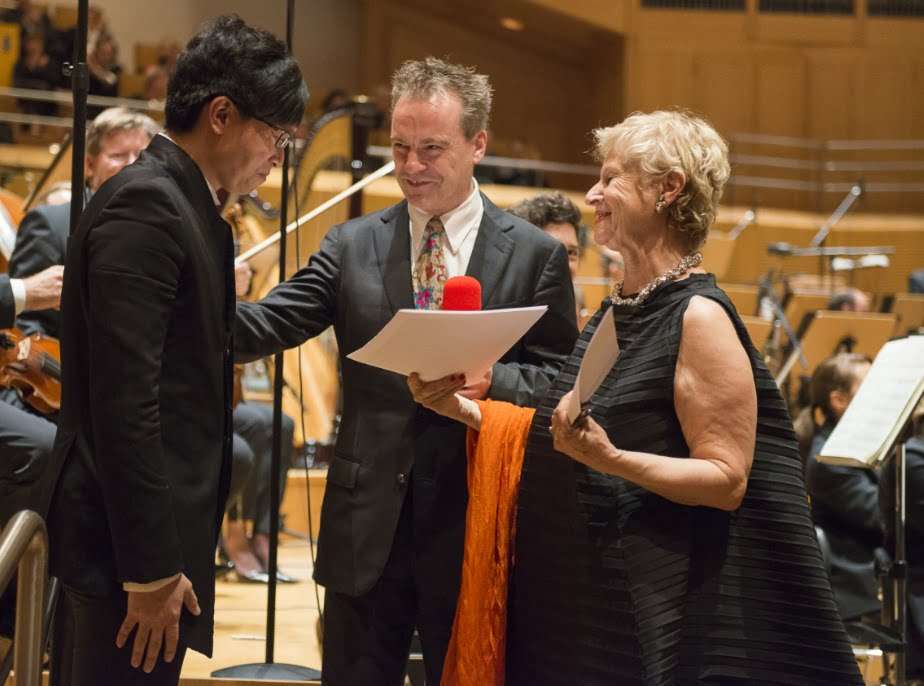 This year’s Jury was notably well balanced. This galaxy of musical talent reflects the increasing maturity the competition has now attained. Besides selected movements from Mahler’s Third Symphony, the repertoire for the competition included two movements from Haydn 44, Henri Dutilleux’s Correspondances (a series of three settings, one featuring the words of thanks from Solzhenitsyn to Rostropovich and Vishnevskaya, and a letter from Van Gogh to his brother Theo), Webern’s Six Pieces (Opus 6), Jörg Widmann’s Bayerisch-babylonischer Marsch and a commission by Georg Friedrich Haas called Zugabe.

The Haydn was included to test participants’ credentials in a ‘Classical’ Symphony, the Dutilleux to show them working with a soloist. By the time of the semi-finals the Webern had been dropped in favour of the Widmann, a hilarious showpiece, and the Haas, which echoes the near-obsessive patterning of much electronic music with the added frisson of quartertones

By the time of the penultimate round the remaining conductors were Paolo Bortolameoli, a Chilean who has worked as cover conductor for Marin Alsop and the Baltimore Symphony; the Russian Sergey Neller, also a composer and pianist, whose mentors include Gennadi Rozhdestvensky and Jorma Panula; Kah Chun Wong, a Singaporean who has appeared with the Atlanta Symphony and the St Petersburg Symphony; Gabriel Bebeselea, a Romanian who lives in Vienna and will shortly become Principal Conductor of the Transylvania Philharmonic; and Valentin Uryupin, born in the Ukraine, a graduate of the Moscow Conservatory and Principal Conductor of the Rostov-on-Don Philharmonic.

One notable thing is that all five already have considerable experience. Another was that all were required to conduct the same music, which meant we were comparing apples with apples, a level playing field.

Paolo Bortolameoli
Rather curiously, given the emphasis in the forthcoming Bamberg season of “music that dared new paths”, Haydn’s doesn’t figure as such, yet Symphony 44 is perhaps the single work which above all marks the transition from Haydn the relatively conventional composer to Haydn the radical.
The second-movement ‘Canone in Diapason’ is a grim contrapuntal Allegretto, and its radiant Trio is a shaft of sunlight falling aslant a sombre landscape; the fiery Finale is angry music. With one honourable exception all the conductors struggled here, the music made prettified and emasculated.
Bortolameoli, rehearsing in English, made heavy weather of the Haydn, making little distinction between the grim canon and the contrasting Trio. All was ultra-legato and tension sagged. In the Widmann he spent a disproportionate amount of time fussing over detail. The Mahler whilst pleasant enough, made little impression. 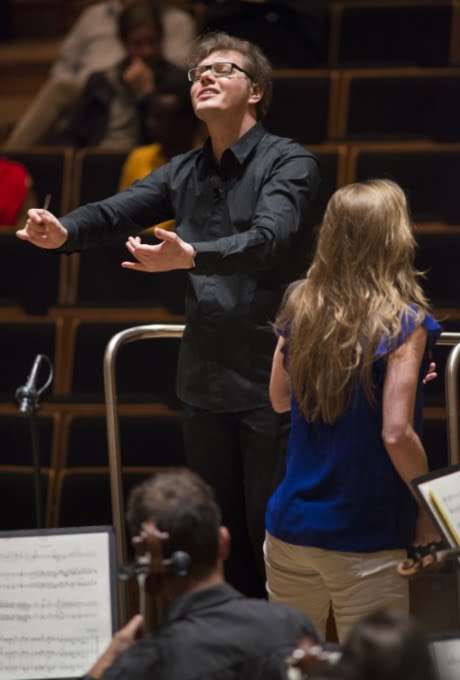 Sergey Neller
What a complete contrast! Neller rehearsed in German from memory. One could object that this was premeditated showmanship, Neller having already decided the spots he would go over; to a degree it undoubtedly was, but it was clear that Neller knew the scores, was able quickly to identify the things he wished to practise, and has an admirably clear stick technique.
Musically, the Haydn was perhaps the least interesting but the Widmann was a riot, despatched with crisp panache, and Neller has a sense of humour. Best of all was the Mahler (from Fig.21). This was taken at a genuine Adagio and fully sustained. It was truly impressive with that rare sense of time suspended. With orchestral managers in attendance, Neller was offered work on the spot without waiting for the Finals.

Kah Chun Wong
Kah Chun Wong, a protégé of the late Kurt Masur, has amassed a wide range of experience with a variety of orchestras. To be honest, whilst Wong was clearly thoroughly competent, at this stage, I did not see him as the frontrunner. Others though were more impressed and they were proved right. Communicating vividly in English and German, Wong memorably described the Trio of the Haydn as “Sunlight in Winter” and produced a Finale which was dynamic if slightly deficient in muscularity. In Wong’s hands the Widmann lacked the manic glee which had characterised the previous contestant and his Mahler was flowing rather than achingly intense.

Gabriel Bebeselea
As with Bortolameoli, Gabriel Bebeselea was thoroughly musical – his Haydn was pleasant rather than arresting – and it was clear that, although in control, he was unlikely to make the cut. It was all rather bland. He may not have done himself full justice.

Valentin Uryupin
This giant (six-foot three, at least) made a thoroughly impressive appearance. His Haydn was quite the most inspiring, if less so for the Widmann, which here lacked exuberance. By contrast, the Mahler had much of the concentration and charisma which Neller had brought to it. Rehearsing in English, Uryupin also had a conspicuously pleasant manner.

The three Finalists were announced – Neller, Wong and Uryupin. At this point, if grading them one would have predicted them ending up in the above order. 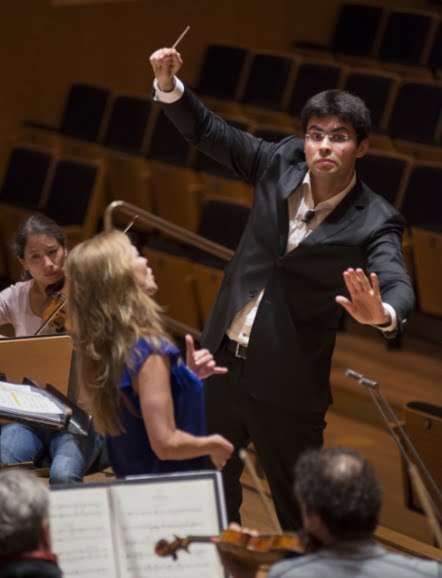 Final
Each candidate had fifty minutes, the programme included the initial setting from Correspondances (‘A Slava et Galina’), the Haas, and ‘from’ the outer movements of Mahler 3. The Dutilleux involved working with Barbara Hannigan, whilst the Haas is rather more complex than it looks; apart from one accelerando its tempo may be consistent but its textures and half-tones require special attention.

Uryupin
This extremely talented conductor did himself less than justice and fell at the last hurdle. He very charmingly admitted that things that had gone wrong in the orchestra were down to him. He also misread the instruction that the Dutilleux and the Haas were to be rehearsed whereas the Mahler sections were to be played through without interruption. Very unfortunate.

Neller
Once again Neller dispensed with scores; however, when it comes to working with a soloist or in the Haas, this was surely a mistake. Does one really know the Dutilleux well enough to get an orchestra back on track if the soloist were to make an early entry or to have a lapse? There is a point where confidence can become hubris. Having said this, the Mahler was profoundly impressive. Neller clearly commands the grand manner of some older maestros and he can also get playing of real inwardness and spirituality.

Wong
In war, the most important thing is to know the enemy’s weaknesses. Kah Chun Wong saw his opportunity and seized it. In the Dutilleux he consulted with Hannigan, something the other two conductors had conspicuously failed to do. Then in the Haas, he really got to grips with its shifting patterns and textures, working on the quartertones in a way which neither of the others had attempted. The Mahler was the clincher, its opening movement having an aggression and drive where sometimes it can sag, indicating that Wong had internalised its detail and had thought about it deeply.

I preferred Neller in this Symphony because he made this music come from another World, but overall the Jury was correct when, very quickly, it selected Wong as the winner primarily one suspects because he was the more consistent.

Conclusions
Up until the very last moment any of the three could have won it. Uryupin is potentially a major conductor. Neller too has the sort of charisma given only to few conductors. However Kah Chun Wong was the deserved winner, not only because he tackled a wide repertoire with assurance but also because he brings a strong personality to whatever he conducts and has the knack of getting an orchestra onside quickly.

Despite the unpropitious date of Friday the Thirteenth, there was no need for superstitious dread. It was a thoroughly happy event, the prize-giving prefaced by Haas’s Zugabe. This was followed by the complete Correspondances with Hannigan in magnificent form and then that huge first movement of Mahler 3. Wong threw caution to the winds and produced a performance of unflagging energy and intensity. The evening was rounded off by a brief speech from the Bayersiches Staatsministerium für Gesundheit und Pflege and followed by Widmann’s Bayerisch-babylonischer Marsch, feel-good music. Finally, all credit to the tireless Bamberg Symphony Orchestra.