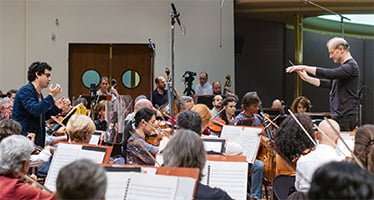 On the 200th-anniversary of the composer’s birth (he was born on 10 October 2013), Rolando Villazón is paying tribute to Giuseppe Verdi with an extraordinary CD. A passionate tenor’s personal voyage of discovery into Verdi’s hidden world of passions.

The music of Giuseppe Verdi is especially close to Rolando Villazón’s heart. The tenor feels at home in the composer’s emotional world. “Verdi knows all our feelings”, he says. “He focuses them dramatically and shows us our own soul in his music, sometimes filled with light, sometimes with darkness.” Villazón’s album for the composer’s 200th birthday is a personal exploration of Verdi in his entirety: the musician, the keen observer of human nature and the man who continues to inspire the masses to this day.


Villazón is undertaking a journey into the real world of Verdi in search of the secret of his success. He’s certain that “Verdi was loved by his contemporaries because he himself had such an infinite love for humanity. In Verdi’s music”, says the tenor, “we experience emotional universes, and we recognize each one because we also inhabit them ourselves – love, hate and passion.” Villazón believes “that is why Verdi’s contemporaries sang his music in the streets and alleys and it is why we still sing them on opera stages, on the radio and on television. Verdi reflects existence in music!”.


Villazón has deliberately avoided concentrating exclusively on the Italian genius’s greatest arias and most famous melodies, but rather has chosen to track down his language of the heart in all the phases of Verdi’s life and in all the evolving styles of his compositions. 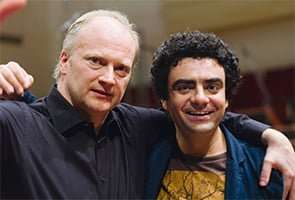 In his encounter with Giuseppe Verdi, Rolando Villazón is exploring the eventful life story of this man of humble origins who became a voice in the politics of Italian unification, a celebrity in the European capitals, yet at home in the country near Busseto – near his birthplace – surrounded by peasants and simple folk. “I’m not concerned with celebrating Verdi only in his familiar arias”, says Villazón. “I’m also interested in the pieces that are unjustly neglected today, in the individual steps that Verdi took on the way to becoming what he is still: the greatest of all composers.”

Thus the recording ranges from Verdi’s earliest opera, Oberto, by way of his frequently neglected songs, to his final masterpiece, Falstaff. “My idea was to present Verdi in all his aspects”, Villazón elaborates, “not only singing the ‘hit tunes’ that everyone knows, but also songs and arias for us to rediscover. Everywhere we find that Verdi was open to inspiration from his surroundings, from his world and the people he encountered. That’s what makes his music so direct. I am convinced that three minutes from any of these pieces is enough to be able to say: ‘Verdi is simply the best’.”


Villazón’s musical voyage through Verdi’s life is wholeheartedly accompanied by the recording’s conductor, Gianandrea Noseda, who directs the orchestra of Turin’s Teatro Regio: “Using Rolando’s idea, we succeeded in tracing Verdi’s musical path, seeing how he gradually found his own voice. And we quickly realized that the early operas often yield nothing to the later works, that Verdi often returned to old ideas in order to develop them further, and that a large portion of his musical material was already created at an early stage. Everything in his career represented growth – one idea led to the next. And this approach has allowed us to comprehend Verdi as a whole!”


Rolando Villazón’s chronological journey takes him from early Verdi operas like Oberto, I due Foscari, I Lombardi and Il corsaro to the great works like Rigoletto, La traviata, Don Carlos and Falstaff. At the same time, Villazón pursues musical byways in his meticulous exploration of Verdi’s inner soul. He includes the ‘Ingemisco’, the tenor aria from the Requiem, of which he says: “It is a central piece in one of the most important spiritual works. Verdi demonstrates that his love for humanity is ultimately one and the same as his reverence for creation.”


A further highlight of the album consists of Verdi’s neglected songs, orchestrated by the great Italian composer Luciano Berio. In solitaria stanza and L’esule suggest that Verdi formulated the music of his operas out of chamber music. “In many of these songs you can already hear Trovatore or Aida”, the tenor enthuses. “Verdi returned again and again to his sketches, all through his life notating his ideas in this form and constantly deriving inspiration from them.” The concise songs were a great discovery for the tenor: “It may well be that these formally straightforward drawings led to the great operatic oil paintings, yet there is no doubt that they manage to narrate a whole drama within just three minutes, one that lacks nothing in emotionality and passion.”


Villazón’s Verdi is not only a revolutionary composer in the history of opera – for example, when he chose the contemporary story of a tragic courtesan as the subject of La traviata – but also the political revolutionary who became involved in his homeland’s struggle for unification. The tenor’s main focus, however, is on the man Giuseppe Verdi: “I don’t know if his life itself was an opera, but I do know that he was a passionate human being. Testifying to that are over 15,000 letters that Verdi wrote. And, of course, he constantly drew upon his own private situations and observations and moulded them into music of universal validity. That is why his works are so close to us – because they come from the midst of a life, from Verdi’s life and our life.” Verdi’s first and last operas, Oberto and Falstaff, frame this musical portrait.


If he had his fondest wish, Villazón would congratulate the composer in person on his 200th-birthday. “I would like to ask Verdi how I could best serve him and then work with him. Perhaps I could eventually entreat him to write a brief piece of music for me. That would be the greatest gift of all.”