An unexpected connection between Scotland and the Czech Republic is in the process of establishing itself in the music of Geraldine Mucha (1917-2012). This long-lived composer’s father was Marcus Thomson, professor of vocal studies at the Royal Academy of Music and a crucial influence on his only child’s musical development, to the extent that she could write music before the alphabet. Father was a Scot – hence her life-long insistence that she was a Scotswoman – and she spent much time there. Her family was artistically very well connected, and life in London included musical luminaries such as Arnold Bax, Benjamin Dale, William Alwyn and Alan Bush, the last three her tutors when she started to study composition formally (also at the Royal Academy of Music) in 1935.

Her life changed completely, when, in the early 1940s she met Jiří Mucha, a Czech war correspondent and the son of the artist Alphonse Mucha, one of the defining figures of the Art Nouveau movement – she never met her father-in-law, who died in 1939. She and Jiří married in 1942 and moved to Prague in 1945, at the end of the war. Life there became very hard with the communist annexation in 1948, and even harder in 1950 with Jiří’s arrest for espionage and subsequent brutal imprisonment. Geraldine became completely absorbed in protecting and, later, promoting Alphonse Mucha’s legacy, and there are hair-raising stories of her fending off communist attempts to seize the “decadent” (and increasingly valuable) collection, while her husband endured forced labour in the notorious uranium mines.

Somehow – in a life dominated by all sorts of restrictions that persisted through four decades until the collapse of the regime in 1989 – Geraldine Mucha not only kept one significant flame of Western culture alight while raising a family, she also steadily kept on composing, pragmatically veering towards smaller-scale music for more performance opportunities. I met her once, at the family’s 2002-3 New Year’s Eve party in their apartment in Prague castle, a treasure-trove of paintings and furniture, when she was merely in her vigorous eighties. There was whisky and Scottish-dancing, presided over by this amazingly complete, vital woman. She died ten years later, only two weeks after her ninety-fifth-birthday concert of orchestral works, which was recorded on DVD, along with an extensive interview. These are the barest bones of her life. Even so, it is quite a story. 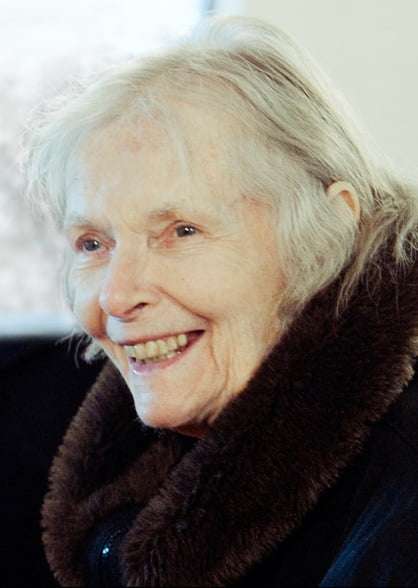 The Prague concert (10 November 2017, Sál Bohuslava Martinů) marked the centenary of her birth, as well as the twenty-fifth anniversary of the establishment of the Mucha Foundation, which looks after the artistic estates of Alphonse, his son Jiří, and Geraldine. Sometimes concerts entirely given over to a composer whose music you are hearing for the first time work against their interests, as the listener gets a handle on a new voice, usually through the compare-and-contrast process of discernible influences. Tippett’s string-writing, a mid-twentieth-century, East European open-ended angular lyricism and Bartók’s rhythmic bite – all hover round the edges, but all the works in this concert programme were marked by an open-air, impressionist quality.

Having listened to her music for full orchestra on recording – more of which anon – I felt that smaller forces give a more direct access to her modus operandi. The Overture to The Tempest conveys Shakespeare’s fantasy with the sort of wit and deft imagination that saturates Mendelssohn’s Midsummer Night’s Dream music, with a lovely, beautifully played trumpet tune slicing through the texture and some magical passages for a group of solo violins flagging up the Scottish sensibility that marks most of her output. It was written on Westray, the Orkney island where she often composed, where there is nothing except a collision of weather, light, sea and birds. Her marvellously open, sonorous string-writing connected even more strongly in Carmina Orcadiana, with rhapsodic duets for two violins and pithy Scottish dance rhythms lapsing into poetic stand-and-stare moments of great beauty. There were quite a few more of these in the deeply felt Epitaph to her husband, who died in 1991, with the oboe role hauntingly played by Anna Škreptáčová, a set of variations on the Skye Boat Song, which works towards rather than away from a full expression of the famous tune, and eloquently expresses life, energy and loss.

As the concert progressed, I became increasingly aware of an element of secrecy, which emerged in the slow movement of String Quartet No.1, a three-movement piece from 1944 very much in the Bartók idiom, and which took over in the Quartet No.2 (1988), for me the ear-opener of the evening with its elegant, conversational contrapuntalism balanced by a superbly ambiguous approach to harmony, a virtuoso evasion of tonality worthy of late Fauré. Both works were delivered with the utmost conviction by the Stamic Quartet.

You might have thought that, living in Prague for much of her adult life, Mucha’s music might have flirted with Janáček. Opera does not figure in her work, which is a pity because the florid vocal lines of both En los Piňares de Jucar (about Spanish girls dancing) and, on the Arco Diva CD, the John Webster Songs are a gift to a soprano.

That Mucha doesn’t lack a sense of drama is borne out by the Suite she created from her music for a projected ballet, Macbeth, which is full of atmosphere and, for dancers, many rhythmic dangers. The Piano Concerto (on the disc) is a glamorous, bravura piece that steals a march on Prokofiev, Bartók and Gershwin, and is played by Patricia Goodson with far more dynamism and flair than she brought to her rather cautious performance on the 2012 DVD. A second CD, of Mucha’s chamber music, is due next year, which perhaps might give us some of her more recent pieces – the latest discussed here is from 1991. Mucha’s music has been a major discovery for me, and I look forward to the next thrilling instalment.