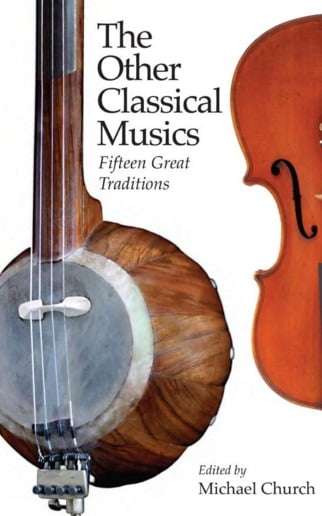 All-round excellence and enjoyment informs this tasty tome, one that extends our appreciation of the term ‘classical music’. We easily use that expression to cover Bach to Boulez although of course we also categorise with Baroque, Classical, Romantic, Modern – whatever – and although Western Music itself is vast and for a lifetime’s nourishment, there are other worlds of musical richness out there, which this handsome book sets out to illustrate, and does so in the most winning and inspiring way.

First of all, it is beautifully produced, to exacting standards; Michael Church, the overall Editor (and part contributor) is to be congratulated on his masterly coordination and ensuring that the final result is as eye-catching as it is exhaustive as it is enlightening.

You will see from the above listing what is covered in this volume, numerous musics that also have a long and treasured tradition. Of course Europe is included, and Ivan Hewett begins his very readable survey in the Ninth Century. Even for those of us steeped in this music, Hewett offers much that is informative. Similarly, the most-recent of these art-forms, North American Jazz, makes you want to explore further such a foot-tapping and exuberant genre.

It may be best to suggest to readers that they start with the chapters on Europe and Jazz; this on the surmise that they are the most familiar. The presentation will be found to be typical of the whole, for these essays are presented with care, and include numerous illustrations, photographs, music examples, and advice on further reading and listening. There is also a copious index.

This though is not a book to read from cover to cover. It is one to dip into, instalment by instalment, as takes your fancy, and to break off within it, if desired, to reflect. Each of the writers is an expert and also an enthusiast, and this balance between knowledge and passion is well-balanced and should take the receptive reader effortlessly into what maybe uncharted territories, guided by a specialist who is also vividly communicative. Each of the contributors is given a biography, Church has written an Introduction that helps the reader set sail with confidence, and his preface also leaves in no doubt just how much consideration and effort has gone into the book’s making.

So, if you are looking for a publication that is produced to the highest standards and embraces illumination, tangibility and delight, then The Other Classical Musics is highly recommended: a great spirit of adventure is enshrined within.