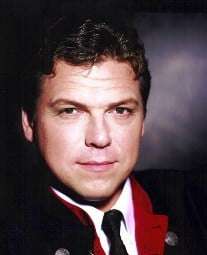 Michael Schade is a proud man – and rightly so. He’s still caught up in the excitement generated by an honour bestowed on him earlier this year in Austria. Last January he was named a Kammersänger, an award given to singers who have contributed significantly to music in that country. The term may translate as ‘chamber singer’ but, as Michael explains, the reference is not to Lieder or to anything that could be thought of as chamber music. “It’s a royal title because what it meant was that you were appointed a royal singer of the royal chamber, and to this day you have to be approved by the Chancellor of Austria. The award is given by the Minister of Culture and it’s a big ceremony that means a lot, especially for me since it comes from a country that has given me so much. When people greet you with the royal title of ‘Herr Kammersänger’ it’s really nice.”

Important as Vienna and Salzburg have been in Michael’s career, they are now part of a life, which despite his having a home near Toronto, is one of constant movement. To some extent it was always thus: Michael was born in Geneva of German parents who took him back to Germany in 1970 and then to Canada in 1977. “It was in Canada that a lot of things happened that proved very influential in my musical upbringing, and I made my operatic debut there in 1988 in Fidelio. But as a teenager I had never thought of a career in music despite attending a wonderful choir school called St Michael’s when we came to Toronto. My mum was a high-school teacher whose subjects included music and we were a musical family, singing madrigals and German folk Lieder and so on at home. But it was all done for fun. When I went to university I was thinking about becoming a veterinarian – indeed Simon Keenlyside and I share a passion for bird-watching. There was no single moment when I changed course, but gradually the singing that I was doing for the pleasure of it grew more and more central. At age 22, I won the Second Prize in the Canadian National Vocal Competition in a year when Heather Harper and Theodor Uppman (the original Billy Budd) were on the jury. Later I did my Masters at the Curtis Institute of Music in the United States and in addition to doing operatic work I won the New York Oratorio Competition. From there it really snowballed.”

Gaining an agent helped the subsequent build-up. “I ran into top management right away and, although these days it’s rather unusual, I’m still with the same manager who has been very influential and very good. They got me my European debut in Bologna in 1991 in “The Magic Flute” and that really opened the door in the land of opera. In Italy I did a lot of Mozart and Rossini and at the same time I was working a ton with my friend Helmuth Rilling and learning the Bach Evangelists from him. But the biggest thing of all that happened was when I auditioned for the Vienna State Opera in 1992. On the very day that I did that Ramon Vargas cancelled his appearance on the morrow in The Barber of Seville and they requested that I take over and also made that possible. Singing in that production with Vesselina Kasarova really established me, and the ensuing relationship I’ve had with that opera house has been wonderful.

“All my life I’ve learnt music by osmosis – that is by responding to the surroundings and the culture in which you find yourself. It’s amazing how much you gain by entering a culture with respect for it. In Vienna I recognised that I was in a land where you can ask a taxi driver what is on at the opera and he will tell you. You are in the world that produced the Wunderlichs, the Geddas and the Peter Schreiers and you learn what it must have been like for them and for artists like Dermota and Patzak. It’s also a world in which, far more readily than in North America, you are encouraged to sing in recitals. So now I have in my life what I think of as my three cousins: opera, oratorio and Lieder. They are the three needed pillars of our art form.”

In looking back, Michael stresses the extent to which luck has helped him, including his association with Nikolaus Harnoncourt (“not an easy musician, perhaps, but one whose heart and soul lives and breathes music and who is one of the greatest human beings I have ever met”) and with Riccardo Muti who played a vital role in developing Michael’s prominence in those operas by Mozart for which da Ponte wrote the libretto. This brings us to Don Giovanni and to Michael’s latest assumption of the role of Don Ottavio opposite Anna Netrebko’s Donna Anna. The have appeared together in these roles before and he recalls with delight her huge success in that role. “I was there for the famous Anna Netrebko discovery show. She was already a good known Russian singer, but in Salzburg there was a terrible fuss beforehand over the choice of Anna for this role. But when she appeared on that stage it was the day she was really catapulted to the stars. She is such a luscious actress: she can just bat an eyelid and the entire audience will notice. In opera whatever basic blocking there may be the individual character of your fellow players always has a great bearing on how things go. Anna will raise her arms in a certain way and you react to it. I’ve also been working with young Marina Poplavskaya who sings the role on the Eighth of July. It’s a little too early to tell the real difference between the two, but they will be different. Marina has less experience but she has great poise and is a real artist. She’ll do fine.”

Michael Schade’s role is that of Donna Anna’s fiancé Don Ottavio, the man she calls on to act as her avenger. She requires him to track down Don Giovanni who having first made a play for her has then killed her father in a duel provoked by this. Michael’s comments emphasise how closely he considers the character of the man he is portraying. “I’ve spent a lot of time thinking about Ottavio and two things are very important. First, he is absolutely of the same social caste as Giovanni, and in those days for such people it didn’t matter what you did with your milk-maid or your neighbour’s servant but it was recognised that you didn’t offend other ruling families. If that understanding was broken and you fooled around with another man’s fiancée the punishment was severe. Someone like Giovanni would have been thrown onto a boat and banished to somewhere like Australia or Canada where he would become a nobody, a mere commoner. So that’s why Ottavio is slow to take it in: he can’t believe what he is hearing. Secondly, there’s the fact that Ottavio is extremely loyal to Anna. You could say that that’s because he believes in the system and in the family code, or more basically it could be on account of the fact that he really loves her. I would incline to the latter interpretation.”

To justify his view Michael stresses the nature of his lyrical aria in Act One, ‘Dalla Sua Pace’ (‘On her peace of mind mine depends’). “It was actually a so-called concert aria inserted for Vienna subsequent to the opera’s Prague staging and it’s a case of Mozart improving his own opera. He wrote that aria with great love, and it’s a most amazing moment. The writing for the voice is extremely high and exposed and that brings out the lyric phrases in a way that holds everything suspended in the theatre. You find that everyone in the audience leans forward intently in recognition of this being a moment of truth, and everything stops for it.”

Michael finally broadens his comments by comparing this work and the other Mozart and da Ponte collaborations. “In all three of them you have this permanent and quintessentially Viennese feature of moving back and forth between extreme happiness and great melancholy. The finales of these works are never wholly clear-cut even if there’s always some sense of hope. In ‘Così’, for example, can Dorabella and Ferrando really get back together after what has happened? Maybe! In Don Giovanni there are more positive indications. In Act Two there’s classical architectural genius in the way that the initial tone of Ottavio’s ‘Il Mio Tesoro’ is reflected in Anna’s ‘Non Mi Dir’ and is followed by a finale in which they share a duet. But even so there are questions. Giovanni being disposed of means that resident evil has been removed, but what is the forest like without the wolf? When is the next wolf coming? And where will Anna and Ottavio go from there? That they will go on together seems certain, but if theirs was real love does it have a chance to re-grow fully or will it be tainted in some measure by past events? Mozart leaves open the question of how things will go for them thereafter: if we want to see it as a happy ending that is our choice, but it’s up to each and every one of us to come up with our own answer.”