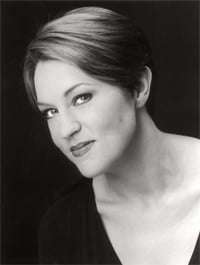 English National Opera begins its 2010-11 season with a new production of Gounod’s Faust, updated for modern times in a co-production with the Metropolitan Opera. The cast is led by Toby Spence (Faust) and Melody Moore (Marguerite), making a swift return to the Coliseum after playing Mimi in La bohème in 2009.

In a break from the intense rehearsals that the production is undergoing, Melody spoke about the new setting, masterminded by director Des McAnuff. “I believe it is looking brilliant and I don’t believe it hinders anything. I didn’t really have much chance to feel anything about it because it works so easily. It doesn’t affect us as much, other than the sentiment of where we come from and where we end up.”

What are the challenges in playing Marguerite? Melody pauses before answering. “Vocally it is very much bigger than people realise, because the ‘Jewel Song’ sets it up for the scene quite brightly as a young girl, but you still have to grow within the opera. You have to grow up and change your perspective, and you have to settle into a lot of pain and sorrow, the way he’s left you. It’s about abandonment and fear, and all these things start crumbling on top of you. I guess it’s the trajectory of Marguerite that is so difficult, where she starts and where she ends up. It’s a huge difference.”

Are there similar demands on her as an actress? “Not if you’re truthful with yourself on every occasion. If I felt the need to show her path and her journey I would feel demanded upon, and frightened even, but if you just inhabit what it would be to feel the things that happened to her, to know that this man loved her but is not coming back, and makes no sign of returning for you or the child that you had together, then I don’t think it’s very much of a stretch to play.” 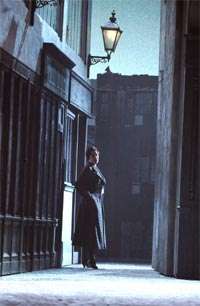 Melody has sung roles from Mozart to Zemlinsky and Puccini, so it is tempting to suggest Marguerite would fall somewhere between the two – but the reality is less straightforward. “I think dramatically it has fallen more into the Suor Angelica type of role, but more than everything it is something like Manon Lescaut, because the same trajectory is reached there. She’s younger, she’s interested in being kept and having jewels around her, and the huge change she goes through between Act Two and Act Three is like what I do here. That was a surprise to me; I didn’t expect that to happen.”

Melody agrees that Faust is a timeless story. “I think it’s a soul thing and not a time thing. This is happening now, and it has happened way back before we had language to talk about. We still understood the choice between wanting and the price that costs. Politically I think we should all understand this story, and monetarily I think we really should understand this story – look where we’ve got now through greed!”

She expresses a little surprise at the results. “I did not know at the onset, because this is a brand new role for me; that it would translate so well. I didn’t expect to feel the immediacy of her.” Without being boastful, it’s like falling off a horse to play her! But it’s not an easy predicament that she’s in.”

There is admiration, too, for Faust himself. “I love working with Toby. When we first started, it was all about the voice, the singing and the phrasing, and that’s a little removed from the storytelling. It has to be, because you have to settle that first and then move into the next part. So as we have moved from musical rehearsals to the studios to here I think it just continues to grow and build, and I have no doubt that on the first night there is going to be quite a relationship there. We talk to each other all the time about how we can help each other.”

Developing singing relationships is something she agrees is one of the joys of opera. “That’s the magic of it, when you walk in you can’t really tell how it is going to be. You only have so much control over what type of personalities are working with you during a project. What you can control is what you have to give to that situation, and what you keep for yourself. I’ve been so lucky in the past, but I’m lucky with this cast that we all get each other, that we’ve all understood each other very clearly. It’s a joy and a discovery, and it’s magical to find different things on the stage almost every time.” 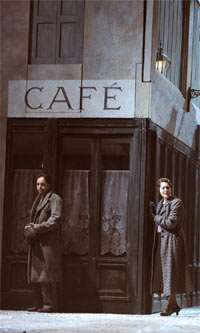 Faust the opera appears to be making something of a comeback, after a period on the relative sidelines. “I think more people are interested. I know San Francisco Opera just did it to a great success, and I think more people are starting to look at this, and rightfully so. There are wonderful tunes, there is the reality of war, death, guilt, God, and choices – yes, I don’t see why it is not performed more!”

There is a price to pay, artistically, which Moore is happy to live with. “It’s a long evening, and I’m on-stage for a long time. Marguerite has that one line in the whole of act two, and nothing in act one, but once you get on the stage she’s on almost all the time. It really does benefit the audience to see me there; it gives them a thread running through it, that someone was affected by these choices, and that I’m not just the person making them.”

She learned the opera in French first, “because we did not have the English translation in front of us, but also as I will be doing it again in French, in Hawaii”. It is her first French opera. “Most of the French music I have done is art-song repertoire. As far as opera is concerned it has been mostly Mozart and Puccini.”

Melody is based in San Francisco – and her eyes light up as she talks about home. “It’s my favourite city, and I get to live in it! They would fight tooth and nail to keep their opera, too. I know a lot of the donors in that circle and they’re in love with what we do. There is a wonderful spirit there.” With worldwide cuts in the arts, that is a reassuring thing to hear. “When you have someone at the helm who is interested in keeping the art-form going, and thinks hard about the art form, it makes a huge difference. You have to be pragmatic about the problem, and think – do you do it with fewer performances, or do you do it with less rehearsal time? It’s sacrificing the actual shows without taking them away from people. The minute they start being cut too much, people start to lose hope that there will be something left. It is a very difficult period, to know where to cut and how to cut, but if someone’s got the feel for this then they make judicious and smart choices”.

As a relative visitor, does she feel ENO is valued within London musical life? Her response is immediate. “Absolutely! I meet strangers at a bistro or my hair stylist, and I talk to them, and there is never a time when I have mentioned ENO that people don’t say ‘how glorious!’ or ‘I’d love to see your show’. I try to get people to come along if there is a way, because you have to encourage that kind of passion. It is very well supported here.”

She agrees the company seems able to draw people in. “It has an amazing heart. I can’t think of a person I’ve met here that I don’t have a tug at my heartstrings about, right from the top as you trickle down to the crew, hair, people that knot the wigs. I can always call someone by name; it really helps when I’m far away from home.” With that in mind, making a quick return was a straightforward decision. “It was the easiest thing to come back and do another role, and especially with better weather this time – it was awful last time, with the snow! Our first night of La bohème was cancelled, but we still had a great time.”

Melody is warm-hearted and easy to talk to, and seems very level-headed about the challenges that Faust has in store. Her immediate plans, however, are reassuringly ordinary – before the production starts she yearns for “a day off to recharge and do the washing, things like that. That will help my preparation”.