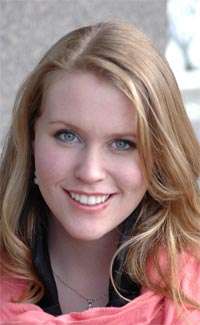 Rachel Willis-Sørensen is young, twenty-seven, though eight years older than the character she assumes on the stage of the Royal Opera House: Countess Almaviva in Mozart’s Le nozze di Figaro. There have been some memorable Countesses over the years at this stage – Elisabeth Söderström (1967), Kiri Te Kanawa (1971 and 1972), Margaret Price (1974), Pilar Lorengar (1976), Karita Mattila (1987), Felicity Lott (1991 and 1995), Christine Brewer (1994) to name just a few – yet Rachel is refreshingly pragmatic about her own position: “This is my big debut with the Company, and this is only the second professional engagement that I have done since leaving the Young Artists circuit, so it’s a very big step, and I am extraordinarily fortunate to be in this position. To start at the top: it’s like I’m already peaking; I’m only 27!”.

Rachel’s rise in opera has been meteoric, and has not been without the requisite bout of good fortune, too: “Kate Royal was scheduled [to sing as the Countess], but she had a ‘happy’ accident – she fell pregnant. Peter Katona (Director of Casting) was a judge at the Belevdere Competition in Vienna, which I won. Then Tony [Pappano] came to Denmark, which was in itself surprising and laudable – I’ve never had a conductor be so accommodating that way – and so I sang for him and I worked with him in the audition – I was so nervous. He was so engaging and interested, and acutely aware of everything that was going on, which is such an uncommon blessing. I’ve had bad experiences where I have flown at my own expense to somewhere and have had people not show up for auditions, so this really was different. Even if I hadn’t got the job, the coaching itself was of enormous benefit. To have Tony’s stamp of approval has been incredible.” Rachel’s grateful and happy attitude is infectious. Royal Opera has given her huge confidence in herself. 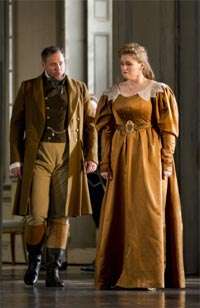 It has only been in the past few years that opera has really caught-on with her. “I have sung all my life, but I did not have any association with Classical Music until I was about seventeen. I sang a lot of jazz, pop and in musicals – and I would lose my voice once a week – and I screamed my way through that ‘belty’ repertoire. Then I took my first voice class, and wondered what on earth I could possibly learn about singing, because when I sang solo jazz parts in competitions I would always win. Yet, in the first voice lesson I was floored – there was so much information. I was doing it so incorrectly. I dedicated so much time then, and my teacher said then that I could be an opera singer. She thought I could sing Wagner!” Opera has been a mature discovery for Rachel.

This assumption of the Countess is Rachel Willis-Sørensen’s major-house debut, and yet the confidence of this imposing young American singer is impressive, but it conceals a great respect for opera and the art of its production. I ask about the process of preparing for this run of Figaro. “The first entrance has her underlying sadness masked by the sheen of being a countess. The first day we were on the stage I stumbled on, looked up and I saw the House for the first time. I was floored. With Tony in the pit, I was overcome at this fabulous position that I find myself in. I feel unworthy. I needed a minute for the experience to soak in.” 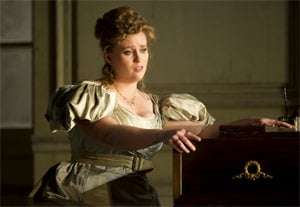 She feels the magic of performance, and she is keen for this to be communicated to the audience. It is clear that singers appreciate the dedication of The Royal Opera’s staff, and particularly Sir Antonio Pappano’s drive and enthusiasm, for getting the best from everyone: “Tony is dedicated to the story and the score, correcting everything. There was lots of attention lavished on singers, making it an ensemble piece. I have a lot of ideas, and being so well looked after has allowed me to refine them. I feel like I am learning in these couple of weeks what it might take a few years because I am having to up my game immediately.”

Turning to the role of the Countess specifically, I ask for Rachel’s thoughts on this young woman: “The countess is nineteen in the play [by Beaumarchais]. I don’t like the notion that the Count is going astray because she has lost her bloom. I don’t think that’s necessary. There are complications to their relationship – there is no child yet, so maybe he is impotent – but it’s too easy to say that ‘Susanna is hot and the Countess has nothing to offer him’. I am trying to play it like she is still Rosina. One can look at it like it’s her coming of age. She’s learning to be a Countess. In the beginning she married for love, but he doesn’t love her anymore and she’s miserable about this. That is something that we relate to and can care about. Yet, at the time, women married for status rather than love. In the end he apologises and she forgives him [in the third Beaumarchais play, set twenty years later, they both wander]. It’s such a human story: the countess loves the count deeply, in spite of his human frailties and cruelty, but he makes her feel like a natural woman. Every time she’s onstage there’s anger and hurt, but she’s so in love. He makes her heart beat. There’s lots of fire between them. In this production there is a lot of physicality between them – at one point the Count strikes the Countess. She’s sarcastic, angry and rude, unrefined elements of her character that are a hangover from the Barber of Seville, but this is an important aspect to portray. But, at heart, she is a loving character, and she wants matters to work out for her friends Figaro and Susanna. She relies on this pair, despite the unequal status.” 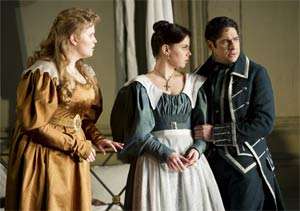 This is the Countess’s current situation, but during this ‘Day of Madness’ “she grows up and she learns. She learns to cope. She learns to be a Countess. This could be sad, acknowledging that the unconditional love of a spouse is an unrealistic expectation. I think that’s something that she realises. She is validated by her actions and the outcome, and her victory will mark some changes. The Count’s humiliation is probably uglier than she intended – her intention was likely that her confrontation would be in private – but he calls everyone in and she has to stop him from exacting revenge on them all.”

Looking to the future, Rachel has a clear idea about what she would like to do with her voice. “Right now I am singing a lot of Mozart, but, ultimately, I might change into Jugendlichdramatisches Fach, which would allow the dramatic roles of Wagner. The more I have sung and listened to opera, and the more singers that I have learnt about, what I have enjoyed most is the way in which expression can be caught – during my research, in particular, I was curious about coloratura singers. I listen to any and all Joan Sutherland recordings, but it turns out not to be my repertoire, unfortunately. Ultimately, I would like to explore Wagner and Strauss. At the moment I can visualise myself in the ‘blonde’ Wagner roles. I’ve covered Elsa at Houston and did all the rehearsals, and although before that I didn’t think I would be able to cope, I have found that my voice can suit these parts. During my discovery and trial of these I have found that voices are either categorised as Italianate or Germanic. My tastes are people who sing German repertoire in an Italian fashion. I like Christine Goerke in this respect. But this is an exploration for me – I’ve yet to meet an opera that I don’t like – so discovery may well take me to places I have not even considered.”

Returning to Figaro, Rachel views the opera as a paean to the nature of human forgiveness, and in many respects Le nozze di Figaro offers her the canvas on which to draw and experience great existential ideas: “It is a perfect show. These characters are real people that you can care about so easily. Even the Count, who is wicked, is human. The conversations that they have are conversations that people have all the time. You can suspend disbelief so easily for the silly parts, but the investment that we make in the characters allows them to breathe as real people. Of course, the music tells the drama so well, with Mozart’s invention keeping one hooked, whether it is emotional or light music. The audience feels itself in the show, and that’s what makes it so worthwhile and, ultimately, popular.”