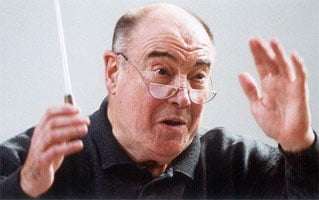 As with most music lovers of my generation I suppose I first encountered
Vernon Handley’s name in the early 1960s through his pioneering record of
Bax’s Fourth Symphony with the
Guildford Philharmonic on the small Revolution label. In 1962, Handley had
been appointed Music Director of the Orchestra, which he quickly put on an
all-professional footing. The sound quality was not so good, and I did not
warm to the work (finding the tema trionfale in the finale a let-down), but
what was beyond argument was that here was, in belief and commitment, a
performance of distinction.

Living in London, I would relatively frequently
drive to Guildford for those Sunday concerts conducted by Tod (his
affectionate nickname ­ known to all musicians and many music lovers ­ was
bestowed on him by his father; owing to his son’s ‘pigeon-toes’ he likened
his gait to that of a penguin ‘toddling along’). In Guildford, I
particularly recall an outstanding account of Brahms’s B flat major Concerto
with the Spanish pianist Joaquin Achucarro (who had won the International
Liverpool Piano Competition in 1959). So I came to know Tod’s work in the
mainstream repertoire as well as in that on which much of his reputation was
based – British music – for within ten years of that initial Bax disc he had
launched upon what was to prove to be a long series of recordings, dominated
by the music of British composers. Over 30 years ago, during lunch, I asked
him which work he had not recorded that he would most like to set down. Many
will be as surprised as I was by his answer, which came quick as a flash: ‘Prokofiev 6′, he replied, embarking upon a particularly enlightening
spontaneous lecture on the work.

Alas, he never got to make that record,
which – along with other twentieth-century works about which he enthused – would doubtless have done much to disabuse the public and critical
perception of his work. He did – unfairly, surely – find himself labelled
with the ‘British Music’ tag; not that Tod would not have wanted to take the
manifold opportunities that came his way with regard to British music, for
his legacy in terms of first recordings (to say nothing of the quality of
his performances) is second to none, covering a wide range of labels: EMI,
Lyrita, Chandos and Hyperion especially. Who else at the time, after the
deaths of Barbirolli and Boult, could have brought off such outstanding sets
as his wide-ranging Elgar series for EMI, or the Bantock and (especially)
Robert Simpson series for Hyperion, or the Malcolm Arnold discs for Conifer
and the complete Bax cycle with the BBC Philharmonic for Chandos, alongside
those remarkable other Chandos records with the Ulster Orchestra, of which – from 1985-89 – he was Chief Conductor? Not that everything I heard Tod do
invariably impressed me; I thought his Walton First Symphony, solidly
impressive though it was, lacked that constant feeling of electricity which
the composer (and Previn, of course) brought out of the score. 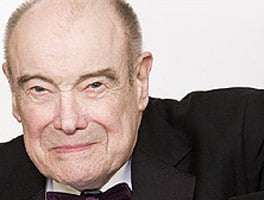 Tod was born
in Enfield, North London in November 1930, but although he was musical from
an early age, an accident to his hand when he was only eight prevented him
from ever playing an instrument. He was thereafter obliged to experience
music and music-making in other ways. He was encouraged at school to study
the subject and was able to attend many BBC Symphony Orchestra rehearsals at
the Corporation’s Maida Vale studios, where he first saw Sir Adrian Boult.
The experience convinced Tod that he should become a conductor, and by sheer
hard work and determination he was able to realize that ambition. Like
Boult, who became a close friend and mentor, Tod used a long baton.

The
older man’s influence was crucial in getting Tod’s first professional
engagement, with the Bournemouth Symphony, in 1961. It proved an
instantaneous success with musicians, public and critics alike – so
successful, in fact, that well over ten years passed before he conducted the
orchestra again. I don’t know what it was about Tod, but it often seemed
that an element of ill-luck attended much of his career. For example, he was
Principal Conductor of the Ulster Orchestra, and became Conductor Emeritus
of the Royal Liverpool Philharmonic; he was Principal Guest Conductor of the
Melbourne Symphony and Chief Conductor of the West Australian Symphony
Orchestra in Perth – but he never held the senior post with a major London
orchestra, although he was greatly loved and admired by musicians. Perhaps
it was because of his deep and lasting commitment to British music, which he
insisted should form part of just about every concert he conducted – a
commitment that although largely unfashionable (as it ever has been) should
have earned him a long-overdue knighthood (which he never received, nor was
it offered) – when his achievements and examples were admired by anyone who
possessed a scintilla of knowledge of the subject. He was awarded a CBE in
2004, having quite rightly turned down an OBE 16 years before.

Despite his
being greatly admired for his concerts, it was in the recording studio that
Tod truly shone and came fully into his own. Andrew Keener, who produced
many of his finest recordings (including the Simpson symphony cycle and the
Elgar Violin Concerto with Nigel Kennedy), called Tod a ‘benevolent didact’,
adding that he was ‘someone who made making records exciting, embracing his
position as conductor in a wholly musical way’. Tod’s great gift was his
profound knowledge of the work in hand; he would carry the entire structure
of the music in his head, possessing an equal quality of conveying that to
his musicians without rancour, hectoring or downright showing-off. His
permanent musical legacy resides in those marvellous records.