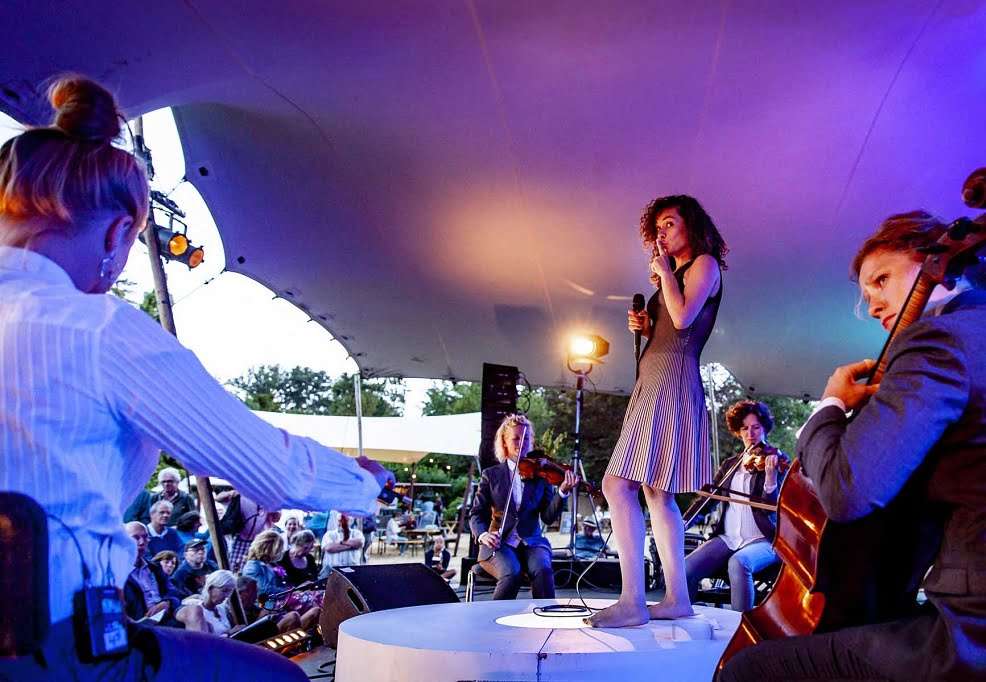 I have to believe that the ambitious annual Wonderfeel Festival, held just outside of Amsterdam on July 20, 21 & 22, is unique: A massive three-day outdoor festival with seven stages active simultaneously.

Wonderfeel brings a concentration of classical music to an atmosphere that is more like a folk festival than a recital hall. Lay down on the grass or on one of the comfy beanbag couches. Go get yourself a coffee or a beer. Get up in the middle of a movement and find another stage to check out.

In this its fourth edition, the Wonderfeel Festival presented over 350 musicians in 125 performances on a sixty-acre nature conservation area in ‘s-Graveland. The range of offerings is vast. There’s a festival orchestra comprised of conservatory students and alumni, as well as string quartets, early-music groups and chamber choirs. But there is also a tango ensemble; an African kalimba player, several jazz groups, a rock drummer, a smattering of dance performances, and more. The quality of artistry is high, and selections can be quirky.

Each day was at capacity, about 3,000 attendees. On the whole, audience members were curious, polite and enthusiastic, but no-one hesitated to leave in the middle of a piece, or if it’s time to head to another stage. The venues are well-placed around the property to avoid sound bleed-through, and it’s a full mile from end to end. There were several events going on at the same time, so meticulous planning was necessary. 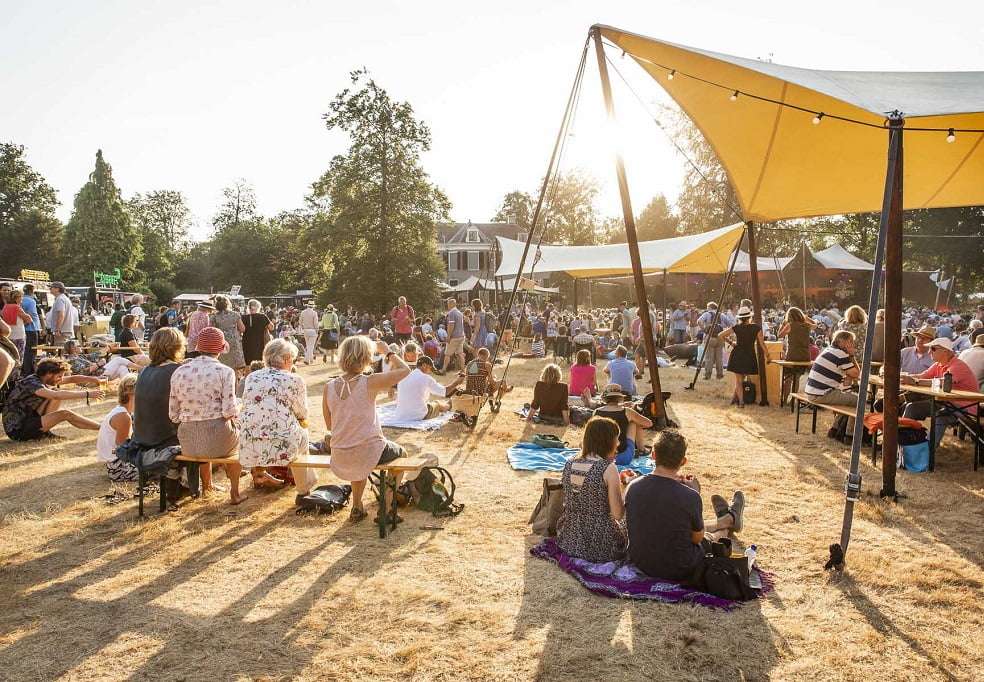 As I entered the grounds around noon on the first day, the Wonderfeel Festival Orchestra was about to perform Schumann’s Cello Concerto with Camille Thomas. The amplified sound was quite good, considering the setting, but it took a bit of time for my ears to get accustomed to it. Thomas played passionately and with ease. The conductor, Johannes Leertouwer, clad in jeans, was exacting, and the players provided a solid accompaniment.

Over at the Solo tent, cellist Nuala McKenna – a Dutch Classical Talent finalist – captivated with Ligeti’s Sonata, and in J. S Bach’s Suite No.6, her clipped staccato phrases in the fast movements gave a bright and happy slant to the music.

A little later, the beautiful tinkly sound of a kalimba, an African ‘thumb piano’, came from the tent. Introducing each of his songs with a story, Mufrika Edward from Zambia accompanied his reedy tenor voice. He learned many from his father, including ‘Teetuay’ (Pounding the Maize), complete with the pulsating rhythms depicting the art of grinding the corn in his village. If this music didn’t entirely melt away stress, one could also take advantage of the massage therapists under a tent on the far end of the property, or yoga with music provided by the Netherlands Saxophone Octet. 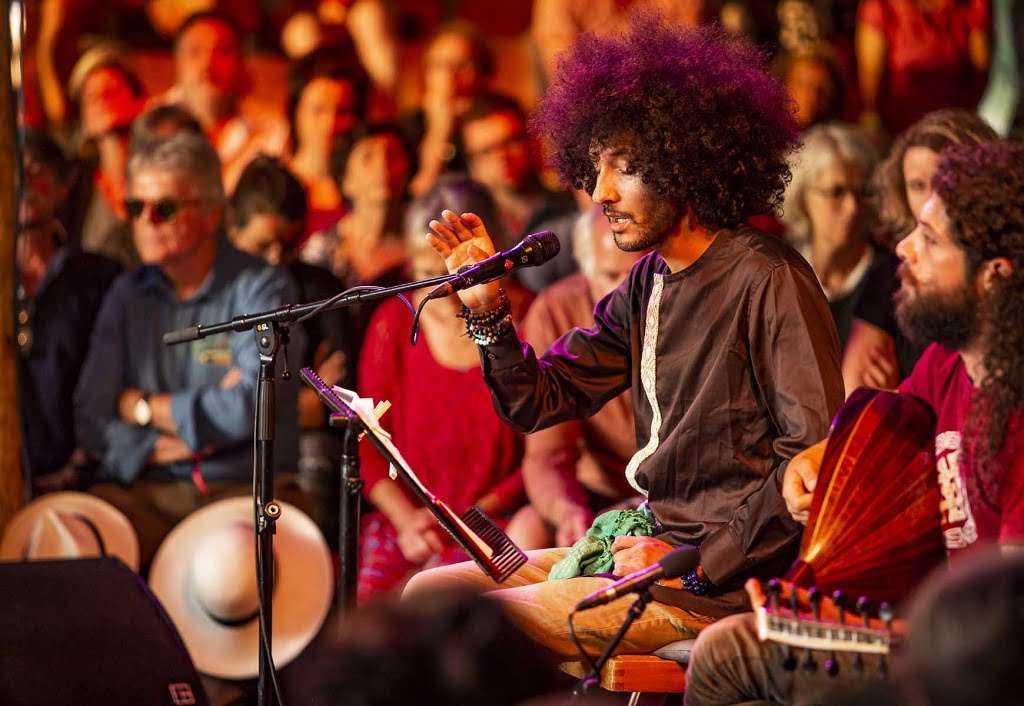 At the Ongehoord (Unheard) stage, Maxim Shalygin, a member of Dutch composers’ collective Shapeshift, conducted his Lacrimosa for seven violins. The tempo and meter rarely varied throughout the hour-long piece, and it lost my attention about halfway through. The composition contained some remarkable effects, including what sounded like electronic processed sounds produced acoustically and dissonant sustained microtonal chords emulating the sound of an accordion.

Back at Het Veld stage, I settled in for an immensely gratifying concert of Vivaldi and Handel by the countertenor Maarten Engeltjes with PRJCT Amsterdam, the ensemble he founded. Engeltjes’s beautiful voice has a glistening, silvery quality, with an unexpectedly powerful low register.

Later in the evening, I watched the dancers and instrumentalists of Asko|Schönberg & K[h]AOS (with staging & choreography by Boukje Schweigmann) perform John Adams’s The Light Within, music by James Tenney, and Hout (Wood) by Louis Andriessen from a vantage point on a small hill. It was a wonderfully serendipitous experience that Charles Ives would have approved of. From afar, I could hear the revered Dutch percussionist Han Bennink thrashing away at De Schuur (The Barn), faint strains from Edward’s kalimba, melodies and applause in the distance, and birds in the trees warbling all around as twilight fell.

The Dutch reed quintet Calefax gave a captivating performance at Weeshuis van de Hits (The Orphanage of the Hits, named after a popular 1980s’ radio program), located a fifteen-minute walk across the property, past a bucolic stream with picturesque lily pads, over a canal and adjacent to a cow field. The oboe, clarinet, bass clarinet, saxophone and bassoon selection included Er Quan Ying Yue by the early-twentieth-century Chinese composer Abing, Nina Simone’s exquisite ‘For All We Know’, some Baroque, and Francesco Tristano’s Ground Bass (Chaconne) which featured extended techniques, including a percussive tongue-slap on the reed on bassoon, and the oboist blowing horizontally across the keys of the instrument.

Julien Libeer’s comfortable presence was apparent as he stood leaning against the piano, explaining a program change due to misplaced music. Libeer played Dinu Lipatti, Bach, and Ravel. Libeer gave Bach a romantic spin and was especially deliberate in Ravel’s Tombeau de Couperin, drawing out the beauty of the melodic lines, and provided a charming encore, Music Box by Pierre Sancan. 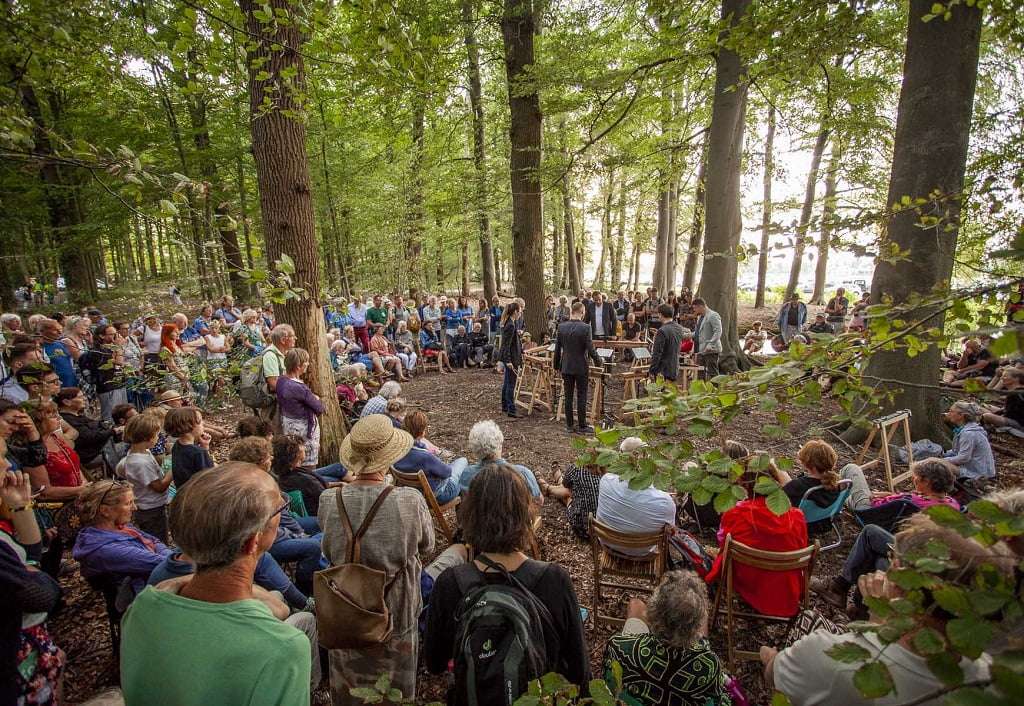 Hearing the violinist Diamanda La Berge Dramm was a revelation. Petite and barefoot (I discovered why later in her set), she cuts a potent presence. Beginning with a solid performance of Biber’s Passacaglia, she then played several selections from Garth Knox’s Violin Spaces. These short works, written for Dramm, take the player through a catalogue of extended techniques, all of which she executed confidently and artistically. For Biber’s Mystery Sonata No.1, Dramm was seated as she simultaneously played the bass line on a keyboard on the floor with her feet. The program concluded with a wistful selection: Purcell’s ‘Dido’s Lament’, with Dramm again accompanying herself bipedally.

There were dozens of other notable performances, including Beethoven’s Opus 127 String Quartet played by the Maxwell String Quartet, a recital of bonbons by the teenaged trumpeter Lucienne Renaudin Vary with pianist Casper Vos, the cellist Victor Julien-Laferrière (winner of the Queen Elisabeth Competition) with Théo Fouchenneret playing Rachmaninov and Dvořák, the Quatuor Hermès playing Ravel, pianist Natacha Kudritskaya in a compelling program devoted to moonlight, Holland Baroque in an unusual combination with the Chinese sheng (mouth organ) virtuoso Wu Wei, and Terry Riley at the piano with his guitarist-son Gyan, gleefully playing jazz as cows roved in a field.

One of the great aspects of the Wonderfeel Festival is that no matter what you’re listening to, there is always something else interesting going on at the same time. On the other hand, that can evoke a serious case of FOMO – Fear of Missing Out. In any case, there’s always next year: 19-21 July.