When I was starting to take String Quartets seriously, in the 1960s, no-one ever mentioned Alexander (von) Zemlinsky (1871-1942). Yet today there are at least five recorded cycles of the four numbered Quartets in addition to a handful of versions of individual works. The pendulum started to swing in Zemlinsky’s favour with the release in 1978 of the LaSalle Quartet’s DG recording of the Second Quartet, made the previous year. The LaSalle went on to record the other three ‘official’ works; and recently a live recording of the Third has been issued.

The selling point of this Chandos set is the premiere recording of the early E-minor Quartet, composed about 1893 and it is a fresh-sounding, vernal piece in the usual four movements. In his annotations – similar to those he supplied for the Artis Quartet’s recordings on Nimbus, which of course lacked anything on this work – Antony Beaumont comments on the intricacies of the opening movement, amazing for someone writing his first such work. I agree, but the overall impression is of the charm of the piece. One gets the occasional echo of Dvořák, and the general style would not have surprised Brahms, who liked Zemlinsky’s String Quintet of 1896. The other movements are a delightful Scherzo with an Intermezzo for a trio; an Andante, with further hints of Dvořák; and a pleasing Allegro con brio.

Beaumont tells us that the surviving parts suggest the work was played, and I wonder if the performers were the Fitzner Quartet. This ensemble’s cellist at the time was Friedrich Buxbaum, who we know was friendly with Zemlinsky. Anyway, the E-minor Quartet was finally published in 1997. The performance is brightly and excellently played by the Brodsky musicians, with much glowing tone. 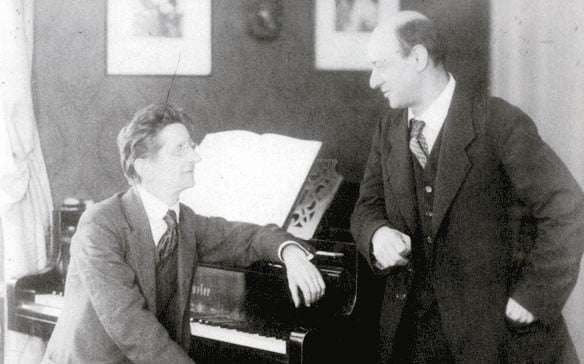 The Quartet No.1 in A minor was composed in 1896, soon after the Clarinet Trio. Again in four movements, this Quartet is also fresh and spring-like, very Brahmsian though with hints that things are moving on from him. The Scherzo, which comes second, is hesitant and Elgarian, with a more positive Trio. The Adagio starts quite dramatically but settles down to a beautiful slow movement, with just the occasional dramatic interruption. The Finale starts very positively but basically returns to the spring-like mood, to end a lovely work.

It is well played by the Brodsky Quartet. There is a previous recording, for Vanguard, although I miss the occasional textural flair that the Zemlinsky Quartet (Praga) and the Artis bring to it. Beaumont does not mention the premiere of this work, but in correspondence he has told me that the Fitzner members played it.

The Second Quartet of 1913-15 marks a complete shift in Zemlinsky’s writing. It is long (43 minutes here) and plays continuously, and although clear sections can be appreciated, the different record companies cannot agree how many there are – Chandos provides eight staging posts. Some people claim to be able to see a basic four-movement plan, but I have never been quite convinced. By now Zemlinsky has experienced a host of music by Mahler, Reger and, above all, Schoenberg. This is not the place to go into the tempestuous and sometimes tortured relationship between these brothers-in-law, but those who enjoy finding autobiographical signposts have discovered plenty of them in this work.

Readers will be aware what a momentous time this was for music in Vienna; and although Zemlinsky had been in charge of the German Opera in Prague since 1911, he was still very much in the thick of things. The main point to make is that, like Max Reger, he went to the very limits of tonality and chromaticism, without ever quite relinquishing his hold on the former. The music of the Second Quartet swirls about but we always feel that it is anchored, however tenuously. The Brodsky musicians play it beautifully, but here I must touch on a slightly worrying aspect of these readings: although I do not own every recording of a Zemlinsky Quartet, those I do possess are all faster and more tightly controlled than here.

Only once, in the Finale of Quartet No.1, does a competitor (the eponymous Zemlinsky Quartet) match the Brodsky tempo. In the Second, this relative breadth of tempo becomes rather crucial. 43 minutes is way-over the Artis’s 36 (in its 1990 Orfeo version) and even over this group’s 38 (Nimbus). The Kocian Quartet (Praga) is close on 40 and the Zemlinsky 38. I cannot point to any particular place where the Brodsky interpretation becomes flabby, but I do feel the players should have tightened it up and exerted more of an overall grip. The LaSalle Quartet, as always in this kind of repertoire, is a good exemplar although I do not have that recording to hand. I wonder what the Rosé Quartet made of the piece, when it finally gave the premiere in Vienna in 1924.

Amazingly, for someone who did not have a great deal of luck with his music, Zemlinsky achieved another first-performance in that year, when his Third Quartet, which he had written in August and September, was performed by the Buxbaum Quartet in Leipzig. No doubt his friendship with the ensemble’s famous cellist helped him to get such a speedy first hearing. This work returns us to a four-movement pattern: the opening one has varied tempos; the second consists of seven variations on a much attenuated theme; the third is a ‘Romanza’, mostly quiet but with passionate climaxes; and the Finale, introduced by the cello, has a very positive ending. The interesting cello part may well have been a nod to Buxbaum. The Brodsky members play very beautifully throughout.

The Fourth Quartet of 1936 was a tribute to Alban Berg, whose death on 24 December the previous year came as a shattering blow to all his friends. The work is clearly influenced by Berg’s Lyric Suite – which in turn had been influenced by Zemlinsky – but although it too consists of three pairs of movements, they are laid out differently: each pair is linked thematically. After a ‘Praeludium’ and a ‘Burleske’, the middle pairing recalls the Prelude to Wagner’s Parsifal; the fifth comprises three variations on a sinuous theme proposed by the cello, and the sixth is a double fugue. Sadly, although the Kolisch Quartet gave the work a private try-out, it had to wait until 1967 for its premiere by the LaSalle Quartet, and a further seven years for its publication. The Brodsky performance, which is very well played technically and tonally, is excellent.

The recordings are splendid, so Brodsky Quartet followers may buy with confidence. Those without any such affiliation may wish to shop around – I especially enjoy the interpretations of the Zemlinsky and Artis groups. The Chandos annotations by Beaumont are lavish and helpful, although he gets confused between the Kolisch Quartet (known as the Wiener Streichquartett up to 1928) and the Buxbaum.