Steven Isserlis may have approached his recording of Bach’s Cello Suites from the position of a religious sub-text, but there is something rather more sobering to these down-to-earth interpretations from Antonio Meneses.

Meneses’s performances are produced engineered by Simon Fox-Gál, who contributes a page to the booklet that talks of how a recording focusing on “purity and beauty, both in terms of tone and musical structure”, will serve these works best.

Purity is a strong element of Meneses’s interpretations, yet he is willing to cast a more expansive dimension on the two darker, minor-key Suites. Thus the Second is a particularly dramatic work in his hands, from the solemn grandeur of its ‘Prelude’ to the almost aggressive ‘Allemande’, with any visions of a leisurely dance put immediately on hold under this considerable attack from Meneses.

The Fifth also crackles with atmosphere, a gruff ‘Prelude’ digging in for the fugal section, whose fiendish technical demands are overcome with little fuss. By the time we get to the ‘Gigue’ Meneses has created an atmosphere of obdurate resistance, and the close feels like a victory won in time for the joyous release of the Sixth Suite.

Dynamic markings have always been a source of contention in these works, with over-eager editors rather too liberal in their application of both these and bowing marks. Meneses is happy, however, to take more liberties than Isserlis, and in the ‘Bourrées’ of the Fourth Suite this reaps rewards with a most effective treatment of the echo-effect doubtless intended by Bach, bringing with it a welcome touch of humour. 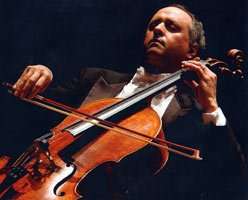 Meneses uses the one instrument, that of Jean-Baptiste Vuillaumme (built in Paris circa 1840). The fuller tone of the newer instrument, particularly when compared with the older style of Anner Bylsma and Isserlis himself, brings with it a more Romantic warmth that suits the finely delivered Third Suite. The ‘Prelude’ is big-boned and the expansive, fulsome ‘Sarabande’ is particularly impressive.

Perhaps the biggest criticism comes with the suites that are lighter in touch, where Meneses can sometimes be felt to be too perfunctory. The First Suite is the biggest victim, missing some of the warmth that comes through the ‘Prelude’ and first ‘Menuet’ in particular, and pushing forward with too much bite through a rapid ‘Courante’, though the second of the ‘Menuet’ dances redresses the balance somewhat and applies a pleasing level of shade.

Meneses looks to quicker tempos for some of the dances, which propel forward nicely without ever feeling rushed. He doesn’t take up the temptation to apply unnecessary ornamentation, letting the music speak for itself, though does add a tasteful embellishment to the four-note chords at the close of the ‘Prelude’ of the Second Suite.

Bach’s suites tend to sound at their best in a church, and Fox-Gál’s recording captures the reverberance of St Martin’s Church without exaggerating the echo. The recording-picture suits Meneses’s approach, viewed through the perspective of German Romanticism but without losing the essence of the music.