Mahler recorded on 29 August 1980 in the Usher Hall, Edinburgh; Mozart recorded on 13 September 1985 in the Royal Albert Hall, London

Just a few months shy of the tenth anniversary of Klaus Tennstedt’s death (11 January 1998), BBC Legends, courtesy of Medici Arts, releases its seventh Tennstedt issue, while collating four of the previous six (a Proms Beethoven 9, a Beethoven 7 coupled with Brahms 3, a Schubert 9 and a wonderful Bohemian disc of Smetana, Dvořák and Janáček) in a special “Portrait of a Legend” box set. In addition, any London Philharmonic Orchestra release this year helps celebrate the orchestra’s 75th-birthday.

This seventh release is a double set, combining an early Mahler recording, from the 1980 Edinburgh Festival, and a rare Mozart offering from the penultimate night of the 1985 Proms. The latter preceded the performance of Beethoven’s Ninth Symphony that formed the first Tennstedt Legends release (when Beethoven Nine was the preserve of the last Friday of the Proms – anyone remember that?), so one can now replicate four Tennstedt concerts as they happened (not only the Mozart 41/Beethoven 9, the sole Mahler 7 on this release and the Bohemian disc, but also – with the help of the LPO’s own-label release of Bruckner 4, that coupled with his Legends Beethoven 1 from 14 December 1989).

The Mozart – placed after the final movement of the Mahler 7 on the second disc – is a taut, spirited performance with no repeats save in the Minuet and Trio, within a very atmospheric Royal Albert Hall acoustic, boasting characterful wind solos and amply bodied strings. In short a winner, reminding how Tennstedt was able to use his volcanic inspiration to great effect even in repertoire with which he is not normally associated.

The main work, of course, is a Tennstedt mainstay – Mahler – and the Cinderella of the symphonic canon with which he ended his conducting career: the Seventh. It was that work he performed twice in his two final public concerts with the London Philharmonic Orchestra at the Royal Festival Hall on 14 and 15 May 1993. Those performances were compiled and released by EMI on a three-disc set a couple of years later, after Tennstedt had formally retired, coupled with a live Mahler 6 from 1991. 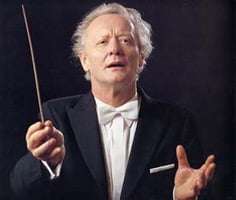 On this Legends release, we turn the clock back 13 years, to the Usher Hall on 29 August 1980. There is the typical sense of electricity, common to all Tennstedt performances, and an honest rawness to the performance that beats hands-down the studio recording Tennstedt made just a couple of months later for EMI. While his last performance was more expansive (add at least a minute per movement), the timing differences between this Edinburgh performance and the studio recording are remarkable consistent.

Regrettably the various solo instrumentalists are not named in the documentation on any of these versions, which is a shame (nor, by the way, are the original BBC Radio 3 producers, but thanks should be offered to Radio Scotland’s and the BBC Proms teams for their contributions). All instrumental departments are on top form, with their contributions caught with remarkable clarity and body in Tony Faulkner’s re-mastering.

Mahler 7 seems the most intricate and experimental of his symphonies; the three middle movements – the shadowy central miniature flanked by the two ‘Nachtmusik’ movements – revelling in spare lines and instrumental effects, complete (in the first ‘Nachtmusik’) with rattling cowbells on the one hand and (in the second ‘Nachtmusik’) delicate mandolin and guitar.

One of the criteria of a good Mahler conductor is his way with the cowbells. Sinopoli liked his being struck individually by a beater, though who has ever seen a cow do that. Salonen in one performance of this work at the Royal Festival Hall (the day after a Tennstedt Mahler 6, as it happens), had a percussionist with cowbells hung over his shoulder walking up and down behind the boxes!

Tennstedt, in rehearsals for his last performances, was intent on showing his percussionists that cows would shake their heads violently and exhorted the player to shake the bell in just such a way (so good was his impersonation of a cow shaking its head, or at least so good was the orchestra’s reaction to it, Tennstedt did it again).

For the record also, in the final movement the distinctive sound of the rute appears as in the score, its soft rattle of twigs beaten together quite unlike any other percussion instrument. In 1993, the two performances differed in this respect – the first had the ‘brush’ as in this 1980 recording, but the second had just a hard single stick beaten against the drum, making a ‘crack’ as if overnight Tennstedt had wanted the brush reversed and the drum hit with its handle, or reverting to its German meaning of “rod”! (The resultant recording stuck with the score and the first night’s performance.)

That was typical of Tennstedt’s ongoing musical thoughts about what he was conducting, but alongside his attention to minutiae was his own sense of purpose. Mahler 7 is often misunderstood, with the common complaint that the finale is bombast. True this symphony has less of the angst apparent in his other completely instrumental symphonies (Numbers 5, 6, 9 & 10), but that is one of the reasons I love it above all others. We should not fault Mahler for a final movement that never turns dark; if he had wanted it to turn to troubled waters he would have written it differently. Here – with thundering timpani to start and sudden switches from two to three beats in the grazioso second subject – he is content to be playful and, dare I say it, happy. And this performance leaves me very happy indeed.

The one, major, miscalculation is to break the Mahler between the second ‘Nachtmusik’ and the rumbustious finale – you have to change the discs. It would have been better to put the Mozart first followed by the brooding first movement of the Mahler on CD 1. But otherwise this is a splendid release, wholly recommendable not only as a testament to Tennstedt, but also for those who find Mahler 7 ‘difficult’. Given that the later Royal Festival Hall performance is currently deleted and the studio recording only available in the (admittedly budget price) box set, this ‘new’ Tennstedt Mahler 7 is a clear first choice, and not just for Tennstedt fans.