Paul Tortelier (1914-1990) first aired Elgar’s Cello Concerto in public in 1930 (well, two movements of it, and when the work itself was only a decade or so old) as part of a graduation concert at the Paris Conservatoire. He would go on to play the concerto complete many times and also to make three records of it – on each occasion with knighted conductors: Malcolm Sargent, Adrian Boult and Charles Groves. Of these versions, the middle one, with Boult, has strong claims to be considered amongst the very best of this ubiquitous piece. EMI’s recording, with the London Philharmonic, was made on 29 & 30 October 1972. Two weeks later, Tortelier and Boult reunited to play it again, this time with the BBC Symphony Orchestra, for this Royal Festival Hall concert.

Not surprisingly, given the closeness of the respective occasions, the performances are quite similar; and timings of the four movements are almost the same. Tortelier shows here a gift for getting to the heart of the matter. Indeed, as Tully Potter reports in his booklet note, Tortelier desired to essay Elgar’s Cello Concerto “with the greatest purity” – this he does: expect no portamento. He certainly reveals the music’s introspection and sadness, but never indulges it; indeed his concept is one of natural flow, wholly without mannerism yet deeply appreciative of Elgar’s private grief and stoicism (bear in mind the First War had just been fought). As an interpretation, Tortelier – tactfully supported by Boult – captures the essence of this music with no need to exaggerate or distend it. 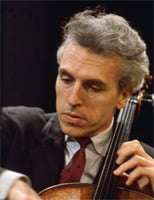 The concert-performance preserved on BBC Legends is fully representative of Tortelier’s view of the work and, with Boult a prudent presence, is a happy mix of informality and mutual trust and also more spontaneous than the just-made studio rendition, but the ‘finish’ of the commercial version probably holds sway. The BBC recording presents a natural balance (arguably the solo cello can seem a mite too distant) and the sound is less immediate and more ambient than one would expect from something taken down in the Royal Festival (and there are also a few curious changes of balance and ambience). Indeed, the general reticence of the BBC sound rather suits Tortelier’s unassuming but very perceptive traversal.

Brahms’s Double Concerto (for violin and cello) was also a regular for Paul Tortelier (there are at least two recordings with him, one with Christian Ferras, Paul Kletzki conducting, and with Yehudi Menuhin, Paavo Berglund at the helm). This BBC account finds Tortelier’s son, Yan Pascal (born 1947) – now best known as a conductor, of course – joining to play the violin part. The performance is both mettlesome and flexible, the two soloists entwining successfully (if not always with the most glowing of tones) in a robust account of the first movement that is not without its malleable asides. More fully engaging are the slow middle movement (here an extended song, with some touchingly expressive contributions from the woodwinds) and an unforced and shapely finale; John Pritchard has the measure of balancing with the soloists and contributing beyond that.

A small blemish – although rest assured all the music is present – is that the cueing points for Brahms’s three movements are each a few seconds late. And so too for the tracks for Debussy’s three-movement Sonata. Partnered by Ernest Lush, who seemed to be something of a versatile stalwart as an accompanist, and a BBC fixture, Tortelier gives an utterly compelling performance of this enigmatic work, fully alive to its quixotic and fantastical qualities but never neglectful of Debussy’s exacting craft. The mono sound, slightly favouring the cello, is more than serviceable.